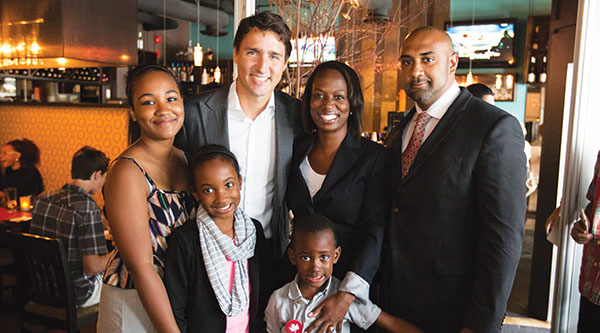 The Grenada-born business woman and long-time Whitby resident says, “Canadians decided that they wanted something different. They wanted change!”

‘Change’, as it turns out, encompassed some history-making: the Liberals now lead the country having gained the most seats in any election – and all this from a party that, before the election, was in third place, having just 36 seats.

The Liberal plan focused on three mandates: First, to create good jobs while interest rates are low; second, to cut taxes for middle-class Canadians, while taxing the richest earners higher; and third, to invest in affordable housing and childcare. The ultimate goal is to grow Canada’s middle class.

Caesar-Chavannes, who, this year, received the 2015 Local Hero Award from Trent University Durham, won with just under 45% of the votes in her riding, ahead of Pat Perkins, the previous MP and Whitby’s former mayor. The outcome was almost the exact opposite of the by-election in November 2014.

In that federal race, which was to fill the vacant seat left after the death of Conservative Jim Flaherty, Caesar-Chavannes was the runner-up. Then, she garnered 41 per cent of the votes, compared to the more seasoned Perkins who gained 49 per cent. Despite that outcome, many said Caesar-Chavannes’ showing was impressive, being a relative newcomer to the political arena.

In her election night victory speech, the MP-elect was gracious in her acknowledgment of the service of her predecessor, Perkins. Caesar-Chavannes promised to be a tireless advocate in Ottawa for the concerns of Whitby residents.

Based on the Liberal platform, the MP-elect says her top priority is to ensure leveraging some of the town’s existing infrastructure. She believes there’s a need to position Whitby’s resources for gains. Among considered resources are Durham College, the University of Ontario Institute of Technology (UOIT) and Ontario Shores Centre for Mental Health Sciences, which she describes as a model of excellence.

“We’re promoting Whitby as being open for business. It’s about seeing what you have in the town, being able to build on it, and make it bigger.

“We want to position the assets we currently have . Durham (College) has expertise in green and clear technology. We want to promote that and invite businesses to partner with the school so that it’s mutually beneficial.”

Caesar-Chavannes — who was endorsed by two of the three Whitby Regional Councillors, Joe Drumm and Elizabeth Roy, and the Whitby Professional Firefighters Association — notes that 50 percent of Whitby’s residents have post-secondary education, and having good jobs in the community is essential.

Another priority is service to seniors. The MP-elect says that quality of life for seniors incorporates their being able to afford healthcare and taking care of their basic needs.

While campaigning in 2014, Caesar-Chavannes said she felt her experience in research, translating evidence and data into policy, were well suited for a federal portfolio.

Her business and community service are extensive: 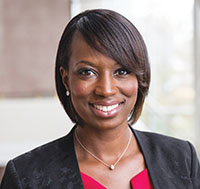 In 2004, the wife and mother of three started the award-winning consulting and management company, ReSolve Research Solutions Inc. The company has served such organizations as Parkinson Society of Canada, and Alzheimer Society of Canada, to name just two.

In 2007 she was an award recipient of the Black Business and Professional Association’s Harry Jerome Award. And in 2012 she was voted Entrepreneur of the Year by the Toronto Board of Trade.

Both nationally and internationally she has lectured on the subject of ‘special populations’ which include ethnic groups and women, besides partnering with federal health agencies on different projects. She has served on a number of advisory boards and was also a member of the Institute of Neurosciences.

While campaigning, Caesar-Chavannes says she listened carefully to constituents. When asked about her goals in representing the riding, her answer was simple:. “My goals for the community are what (community members) tell me they want.”

In a current posting on her website she thanked her supporters, saying, “It is because of your support that I have been elected as the Member of Parliament for Whitby.

“Thank you for all of your efforts which contributed greatly to the success of our campaign. I am very humbled and honoured that each one of you dedicated time and effort in support of our campaign and for this I am truly grateful.”

“As Whitby’s representative in Ottawa, I want you to know that I will be a tireless advocate for our riding. I have demonstrated how hard work and collaboration will result in success. It is with these skills that I will work with my counterparts in Ottawa to find solutions to the many issues Canada’s communities face including those here in Whitby,” she added.

Caesar-Chavannes was one of three African- and Caribbean-Canadian Liberals who won seats in the election.

And Trinidad and Tobago-born Dr. Hedy Fry — a physician and Member of Parliament for the Vancouver Centre riding since the 1993 election, when she defeated incumbent Prime Minister, Kim Campbell — was re-elected on October 19.

The 2015 federal elections saw an increase of visible minority candidates elected, from 29, representing 9.1 percent of the total number of winning candidates in 2011, to at least 46 — 13.6 percent — this year: a record for visible-minority representation in parliament, according to data going back to 1993.

This year also witnessed the election of the first-ever MP-elects of Afghan and Iranian heritage.

Andrew Griffith, a former federal Canadian civil servant, who has worked on issues of multiculturalism and citizenship, told local media: “Having visible minorities in Parliament, whether first- or second-generation, helps ensure their perspective is part of [the] discussion and debate.”

“It also facilitates greater identification with Canadian political institutions among visible minorities as they can see themselves reflected in these same institutions,” he added.