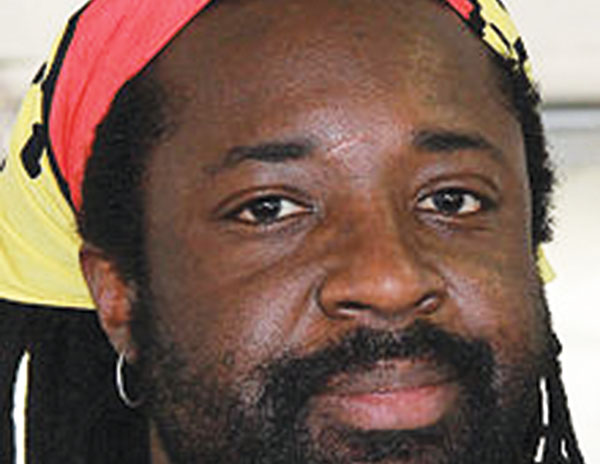 TORONTO, Ontario — Marlon James, winner of the 2015 Man Booker Prize for Fiction for his novel, A Brief History of Seven Killings, says, like some other Caribbean writers, his writing responds to erasure.

James, 45, the first Jamaican to win the prize in its 47-year history, was in conversation with Cameron Bailey, Artistic Director of the Toronto International Film Festival (TIFF) at a Black History Month event, organized by the Toronto Public Library at the Bram & Bluma Appel Salon inside the Toronto Reference Library on February 18.

He said, he is interested in where Jamaican fiction is going, noting that the country has a lot of great writers such as Kei Miller, Roland Watson-Grant, Patricia Powell and Patricia Duncker.

James said the thing he has in common with Junot Diaz, Edwidge Danticat, Patrick Chamoiseau and all the other Caribbean writers is that he responds to erasure.

“I think that some of our stories are either not told or just erased. It saddens me when people say things like “British Empire.” It was not an empire; it was an occupation. It’s not an empire, empire means it’s legit; it was never legit. Every time I try to look forward I see behind me because I think I’m responding to erasure in history. I’m responding to stories even not told, or preferably told by the wrong people.”

He hopes that he is one of the writers and artists who remain committed that the voice that is coming out of his mouth is authentic.

He said he will read a novel that he has a huge respect for, like “To Sir With Love,” but he can’t get pass the language now because it is speaking to empire too much.

A Brief History of Seven Killings, published by the independent Oneworld Publications, is a 686-page epic with over 75 characters and voices. Set in Kingston, where James was born, the book is a fictional history of the attempted murder of Bob Marley in 1976. Describing the book, the New York Times said: “It’s like a Tarantino remake of “The Harder They Come,” but with a soundtrack by Bob Marley and a script by Oliver Stone and William Faulkner…epic in every sense of that word: sweeping, mythic, over-the-top, colossal and dizzyingly complex.”

Responding to Bailey’s question about him loving gossip, James said there are lots of reasons not to trust facts, especially in the 70s in Jamaica when news was shaped by propaganda.

He said a lot of the scoops in his novel came from that usual veranda conversation that Jamaicans will have.

“They’ll never go on record but they’ll tell you all sorts of stuff. A lot of this, including Marley possibly financing a third party, came from a discussion up a hill.”

He said he got truth telling from his mother, who was a detective and the love of poetry and Shakespeare from his father, a lawyer.

The author of three novels said Bob Marley, Peter Tosh, Bunny Wailer, Burning Spear, Dennis Brown, even the dancehall artists, Michigan and Smiley, Admiral Bailey and others used “the idea that you could use, again, the voice that come out of your mouth to speak to really complicated issues.”

James said Caribbean poetry got him aware, even now, and he thinks fiction writers, like himself, are just catching up to the poets “…the idea that beyond this doing Caribbean literature or paying attention to Caribbean stuff because you have to, but that this is something that you can actually be proud of and actually find a world of wonder in.”

A big turning point for him in English Literature class was reading Huckleberry Finn – the whole idea of a novel told through dialect was something that was radical.

He said when he was growing up in the 70s, especially the 80s, roots reggae was his parents’ music, older people music versus dancehall which was his generation’s – Sleng Teng Riddim — which spoke to being young.

“I think dancehall along with hip hop really help shape the way I construct a sentence, meaning that, I notice it more when I write nonfiction, that I will write, ‘in essence, the professor is dropping a theory but he’s really just player-hating.’ And that’s how I’ll write an article because I think that sort of mix and match you have the authority to pick anything, choose whatever you want, throw away this, borrow this, steal that. It’s something that I grow up feeling entitled to and I think it’s music that did that.” – the whole idea of telling complicated stuff in as economical a way as possible.

There is also the element of having a sense of fearlessness in reggae, he said.

‘There was a time when the only people who were truly speaking were the reggae musicians. You certainly weren’t going to find super-critical articles about all politicians in the press, you just weren’t. You’d have to go to a reggae record to find that, the breaking down the hypocrisies and contradictions of Jamaica’s different social classes. You have to go to “we” and “them” to find that — speaking to power and sort of showing the emperor’s clothes is something that the musicians did and I think they did it first. ” 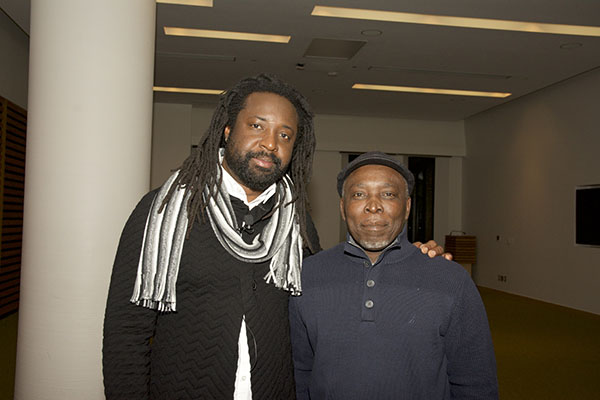 See at the Toronto Library event: Marlon James, left, and author, Garfield Ellis, right, who will launch his new novel, The Angels’ Share, at the Consulate General of Jamaica today. Photo by Eddie Grant.

Bailey referenced dub reggae, the way that music can be stripped down, reconstructed and deconstructed, saying he saw a little of that in the book and asked James if that influenced the structure of the novel.

The author said he was listening to a lot of dub when he was writing A Brief History of Seven Killings.

“There’s a reason why the first chapter is called “Original Rockers,” I was listening to Original Rockers by Augustus Pablo, King Tubby Meets Rockers Uptown, but the whole idea of restart, remix, take the same thing and, you know, Jamaicans say, version. The idea that one chapter is like a version of another. A lot of times in this book the characters are saying the same thing and they’re reflecting on the same thing. And it could be just a very subtle inflection or the differences of values that they have, but that idea of constantly hovering and coming back to a point, an issue, a scene.”

“Wheel and come again,” Baily interjected to much laughter from the audience.

“I don’t think the average Jamaican realizes how much navigation she does in one day – navigating race, navigating shadism, you’re cool in this city or you’re not cool here, you can come to this place but we’re probably not going to let you into this nightclub, and they’re certain parties you’ll never be invited to unless you’re sleeping with an expatriate.”

With regard to navigating gender, he noted that Jamaica has a very patriarchal, sexist culture, and alluded to the mayor in Trinidad, who has since resigned, “saying it was a murdered woman’s fault why she was killed.”

He said he did not realize until he went to the States and returned to Jamaica just how much negotiating and code-switching and minor racism and major racism exist in Jamaica.

Asked by Bailey if he would go back to Jamaica and what needs to change in him or in Jamaica, James quipped that he would probably go back when he’s 60, and that there are things about Jamaica that Jamaicans need to let go of.

“Certainly, the homophobia. I think we need to demand more of the people we put in charge of the country. I don’t think we do. I was in Jamaica last week and it was nomination day so the election is coming up and the thing that strikes somebody outside of Jamaica, if they go back during an election year, they’ll go but I heard that four years ago, 5 years ago, I heard that in ’86 and 76 and 65. It’s the same rhetoric, the same promise…we’re still playing politics the same way and I think that would need to change. Term limits would be nice.”

Bailey asked the author, who is gay and lives in Minneapolis, about homophobia.

“In the book, there is a very strong macho culture with some of the characters and homophobia is a part of that. From your perspective, how much is the homophobia in Jamaica, which is not like the racism in the sense that there is discrimination, people get killed, it’s brutal, it’s murderous, how much is that connected to the sense of Jamaican manhood, asked Bailey.

James said the Jamaican manhood thing can be a low hanging fruit and he is not knocking it. He thinks Jamaican homophobia and Jamaican sexism, anywhere, homophobia and sexism are pretty much a marriage.

“Find me a homophobe, I can scratch and find a sexist. I think they’re interrelated but that doesn’t explain why ours is so acute and I think why ours is so acute is that it gets legitimacy from the church because the last two or three anti-gay rallies in Jamaica were all church rallies. The 20,000-strong protesting against the buggery law wasn’t led by a dancehall deejay.

“Reggae musicians always get the hit for homophobia because they are easy targets and nobody talks about how our establishments, and particularly religion, legitimizes it. The quickest way for hatred to grow is to legitimize it.  A reggae musician does not legitimize hate, the blessing of the Lord and so on, and it’s funny because there are actually quite a few open-minded churches in Jamaica. It’s always complicated that’s one of the reasons why I usually don’t join in the let’s just join in and condemn the country thing. I mean I was there for a good week and nothing happened.”

James said he met with LGBT organizations while in Jamaica and “man, those, especially kids, they’re just like I don’t have time to worry about hatred, I want to decode the new Beyonce video. “As do we all,” said Bailey.

“Yeah, recognize the complication but also recognize that it is acute. My hope is — its sort of half-hope, half-advanced theory — is that its sort of the last gasp of a dying movement and this is why it sounds so loud,” said James.

Bailey noted that HBO has optioned the novel and asked James what should A Brief History of Seven Killings look like on the screen?

He said nearly every designer watches Rockers before they plan their spring collection.

James is also the author of John Crow’s Devil (2005), The Book of Night Women (2009) and A Brief History of Seven Killings (2014). He teaches literature at Macalester College in St. Paul, Minnesota.