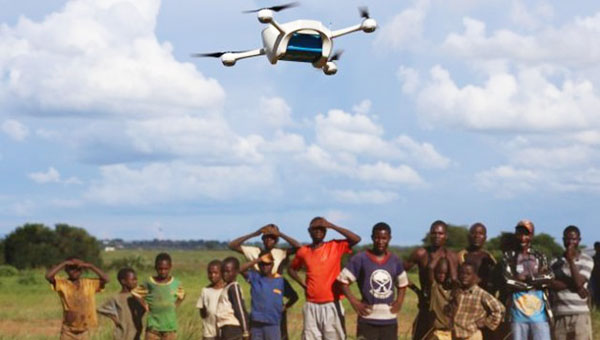 Photo above: African youth watch as drone comes in for a landing. It took 10 minutes to cover 10 kilometers. Photo credit: UNICEF.

LILONGWE, Malawi, Mar. 28, 2016 (IPS) — The first successful test-flight of an unmanned aerial vehicle (UAV), or drone, was an unhindered 10 km journey from a community health centre to the Kamuzu central hospital laboratory, in the capital Lilongwe.

Local community members watched, with excitement, as the drone rose into the sky, after being launched by the United Nations Children’s Emergency Fund (UNICEF) and government of Malawi, at the area 25 health centre.

The first of its kind in southern Africa, the US-manufactured machine was on trial until March 18, to determine if it could replace other modes of transporting dried blood samples from rural clinics, to the main laboratories for early HIV screening in children.

UNICEF, together with the manufacturer, Matternet, hope this innovation will help solve logistical problems in Malawi’s rural areas, due to the bad state of roads and high costs of diesel fuel, among others.

Currently, motorcycles and ambulances are used to transport blood samples between clinics, and take up to 11 days to reach the respective testing centers, and two months for the results to come back. The longer the delay between the test and results, the higher the default rate of the patient.

According to government figures, 10, 000 children died of Aids-related illnesses in Malawi in 2014. Screening of HIV in children with HIV positive mothers is a little more complicated than that of adults, as it requires more sophisticated machinery, which is hard to access for most rural people, due to distance.

UNICEF and the Malawi government expect this machine, which is operated through a mobile phone app, will, in the long run, replace motorbikes and reduce waiting times for results, thereby cutting costs in accessing test results (and later treatment) if children are found HIV positive.

Matternet’s machine will be carrying about one kilogram of the blood samples from rural clinics to main laboratories across the country. This is another innovation from UNICEF, after it launched the rapid SMS program in 2010, with the same aim of speeding up the process of HIV testing and treatment among children.

The drones are said to be cheaper to run than motorbikes, because they only need electricity to recharge the battery, unlike motorbikes, which use a lot of fuel and need constant maintenance. Nevertheless, their purchasing costs could be a hindrance, as each drone costs MK5 million (equivalent to US$7,000).

However, health authorities believe the advantages of drones outweigh the costs. 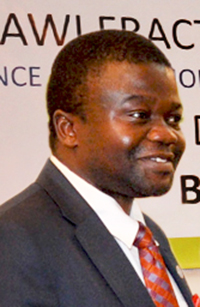 The Minister of Health, Peter Kumpalume, said, “It is specialist testing that we do for youngsters. If you delay giving them treatment, most of them won’t live beyond two years of age. So the earlier the detection and the earlier the intervention, the longer they live and become productive citizens of the country.”

He added, that this would not be the first time Malawi would be making history in the HIV sector: “Malawi has pioneered a number of innovations in the delivery of HIV services, including the Option B+ policy, which puts mothers on a simple, lifelong treatment regime. We have also pioneered the delivery of results from the central laboratory to the health facilities, through text messages. We believe our partnering with UNICEF to test UAVs is another innovation and will help in our drive to achieve the country’s goals in HIV prevention and treatment.”

Kumpalume furthermore noted, that the new innovation was in line with the Malawi government’s 90-90-90 agenda: “Government intends to achieve the 90-90-90 target, where 90 per cent of Malawians know their HIV status, to have 90 per cent of all those diagnosed with HIV receive sustained anti-retroviral treatment, and 90 per cent of people on ART to have viral suppression,” he said.

UNICEF’s representative in Malawi, Mahimbo Mdoe, said, HIV is still a barrier to development in Malawi.

“In 2014, nearly 40,000 children in Malawi were born to HIV positive mothers. Quality care of these children depends on early diagnosis. We hope that UAVs can be part of the solution to reduce transportation time and ensure that children who need it, start their treatment early,” said Mdoe.

Malawi has a national HIV prevalence rate of 10 per cent — still one of the highest in the world. An estimated one million Malawians were living with HIV in 2013 and 48,000 died from HIV-related illnesses in the same year.

Whilst progress has been made, and today 90 per cent of pregnant women know their HIV status, there is still a drop off with testing and treating babies and children.

The drone tests, over the next week, will measure the equipment’s performance with differing winds speeds, humidity and distance and, if the results prove positive, the experiment will be expanded.

The test, which is using simulated samples, will have the potential to cut waiting times dramatically and, if successful, will be integrated into the health system, alongside other mechanisms, such as road transport and SMS.

UAVs have been used in the past for surveillance and assessments of disaster, but this is the first known use of UAVs on the continent for improvement of HIV services.

Matternet co-founder, Paola Santana, said, it would be easier to use the machines in Malawi because of its closely located health structures.

Apart from Malawi, UAVs are also being used in Haiti, Papua New Guinea and Switzerland.