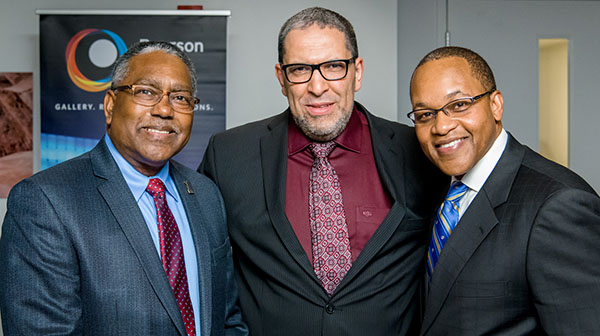 Left to right: Justice Gregory Regis, retired Regional Senior Justice for the Central East Region of the Ontario Court of Justice; Dr. Mohamed Lachemi, Interim President and Vice Chancellor of Ryerson University; and Justice Michael Tulloch of the Ontario Court of Appeal, who is also a Distinguished Visiting Scholar at the university. Photo credit: Clifton Li.

TORONTO, Ontario — A photographic exhibition at Ryerson University, capturing the era of the Civil Rights Movement in the United States, is resonating here in Toronto, in the wake of the ongoing protest by Black Lives Matter, the continued fight against anti-Black racism, and the struggle for civil rights and social justice.

The Ryerson Black Faculty and Staff Community Network held a three-day exhibit of “Learning through the Lens: Representations of Race in the Black Star Collection” from March 22 to 24.

It was presented in collaboration with the Office of the President and the Ryerson Image Centre (RIC), and opened at the RIC on March 22, then moved to the Student Learning Centre on March 23, and to the Mattamy Athletic Centre the following day.

This digital projection features over 45 works from the prestigious Black Star Collection of twentieth-century photo-reportage of the struggle for racial equality, mainly during the 1960s Civil Rights Movement in the United States.

Featuring dozens of renowned image-makers, including Bob Fitch, W. Eugene Smith and Werner Wolff, this project also highlights the important role photographers played in the visual representation of this period of history.

It showcases photos of major figures like author James Baldwin, Dr. Martin Luther King Jr. in his office with a picture of Mahatma Gandhi in 1965 and one of Stokely Carmichael (Kwame Toure), as leader of the Student Nonviolent Coordinating Committee (SNCC), holding a teach-in in a classroom in the 1960s. 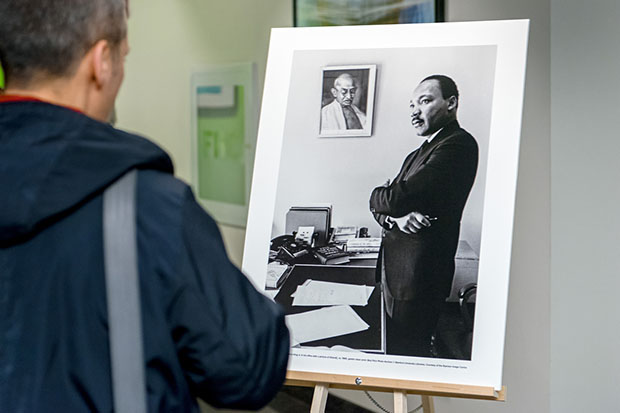 A guest looks at one of the black and white photos of the Black Star Collection which features civil rights leader, Dr. Martin Luther King Jr. in his office with a picture of Mahatma Gandhi, champion of nonviolent civil disobedience, hanging on the wall. Photo credit: Clifton Li.

“It cannot be overstated, this event reminds us of the important moments in history, as was noted, when Black people fought for their civil rights, as well as their human rights. With the emergence of Black Lives Matter, we know there’s so much more work to be done so that Black lives truly do matter,” said Dr. Denise O’Neil Green, assistant Vice-president/Vice-provost, Equity, Diversity and Inclusion (EDI).

She said, the Black Faculty and Staff Community Network is a means by which inclusion can be realized for a particular section of the workforce at Ryerson.

“Groups of this nature are extremely important to foster equity, diversity, and inclusion in a genuine way. And, quite honestly, Ryerson is just trying to catch up. The banks, government agencies, they already have employee resource networks and affinity groups is what they’re called.”

In addition to that network, the university also has other networks such as First Nations, Metis, and Inuit, and Positive Space for Ryerson’s LGBTQ2-Spirited and intends to continue to grow in this regard.

“We’re very fortunate to have networks of this nature to help bring about greater inclusion,” said O’Neil Green.

She said, not only is March, Women’s History Month, and the month in which International Women’s Day is celebrated, but she thought it was very important to underscore the work of Viola Desmond.

“Viola Desmond’s story of being arrested and fined for taking her seat in the Whites-only section of the Roseland Theatre in New Glasgow, brought together the Black community and moved the province of Nova Scotia to dismantle its segregation laws and repeal them, entirely, in 1954 – just one year before Rosa Parks became America’s Viola Desmond, so apparently Canada was ahead of the curve,” she said. 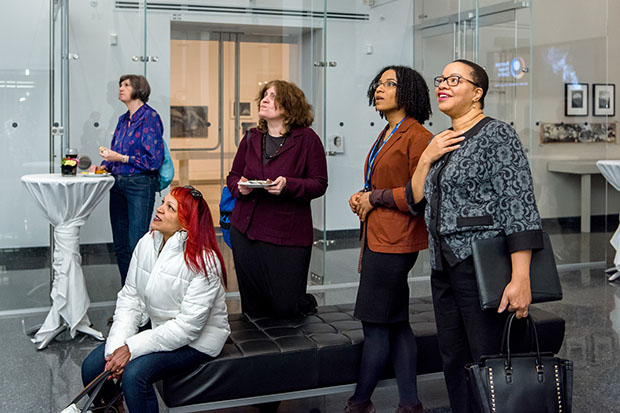 “As you may know, the ceremony is named for a Nova Scotian woman who was a pioneer in the struggle for civil rights in Canada. It’s a story that was not widely known until recently. I was thinking that the photographs from the Black Star Collection may present primarily in the civil rights struggle in the US, but they remind us that this was, and is, still a struggle in our own country here, Canada.” 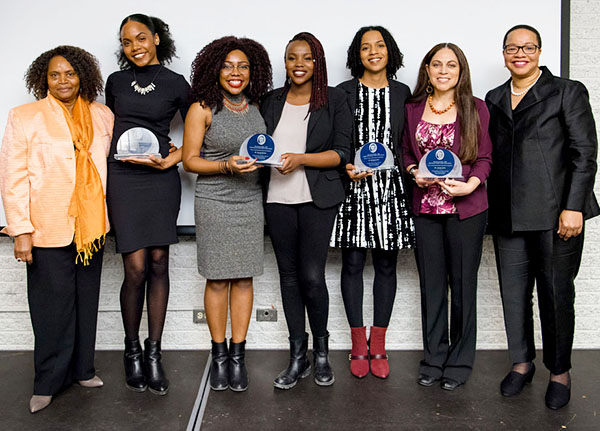 He said, if one of the reasons to study history is to avoid repeating the mistakes of the past, then these photographs are invaluable.

“They are burned in our collective memories and move us to action, and while the images may be 50 years old or more, they have never been more timely. They reminded us that the struggle is not complete. Martin Luther King said, that the arc of the moral universe is long but it bends towards justice. Like the arc, these photographs remind us that we have come a long way but there is still some distance to go.

“I know, that by working together and perhaps inspired by these images the Ryerson community, can continue to make progress towards an even more equitable and inclusive campus. This is part of our values at Ryerson; we make sure that those values are in our strategic or academic plan and will continue to work together with all members of our community to make sure that those values are turned into actions,” he said.

Meanwhile, Paul Roth, Director of the Ryerson Image Centre, said, he believes that photography has the power, unique among the arts, “to take us back in time to important events, to see the faces that we all know, and to invest us in cultural memories that we all hold in common.”

He added, the exhibition emphasizes the great strengths of the Ryerson Image Centre’s extraordinary press collection, its documentation of the lives of African Americans during a time of resistance to racial oppression and protests, in the cause of advancing civil rights in the United States.

The Black Star Agency distributed the photographs throughout North America. The agency commenced in 1935 and was founded by three German Jewish émigrés who came from Berlin to New York City.

Over the next 65 years, the distribution agency and the photographers that they worked with, captured the personalities, events, and conflicts that made the news.

In 2005, Black Star’s photographs, which had been distributed to magazines, newspapers, and broadcast television throughout the twentieth century, were gifted to Ryerson University by an anonymous donor.

In receiving this gift, the university has been entrusted with preserving the photographs and making them accessible to the public through exhibition and publication.

Last week’s exhibition was one example of honouring this trust.

The collection at Ryerson includes more than a quarter of a million photographs created by more than 15,000 different image-makers, including many of the key figures who helped define picture journalism and the illustrative press as they are known today.

“Working collaboratively in New York City with many different important picture magazines, most notably Life, Look and the Saturday Evening Post, the photographers, distributed by Black Star, established the standards for reportage through the lens, which was shared by publications all around the world. And now deposited here at Ryerson, these photographs, once the news, have become history and the collection has increasing importance as a visual archive of historical events and for its unanticipated artistic significance,” Roth said.

He said, the subject matter in Black Star is wide-ranging, including images related to labour movements, wars, political campaigns and daily life, among countless other topics.

It is particularly known for its coverage of the American Civil Rights Movement, which Roth said, is without parallel.

“Through both single news photos and extended photo essays by a variety of photographers, including Bob Fitch, Matt Herron, Charles Moore, Steve Schapiro and W. Eugene Smith, just to name a few of the authors of the images. The commitment and courage of well-known activists and ordinary citizens alike is giving greater dimension because of the visual history that Black Star preserves,” said Roth.

Justice Michael Tulloch of the Ontario Court of Appeal and Distinguished Visiting Scholar at Ryerson, commended the interim President for the initiative, noting that, “it shows great leadership and understanding of the diversity of not only this country but of our society.”

He also praised the Black Faculty and Staff Community Network for having “the foresight to have an event like this so that the greater community can understand what our issues are and understand that collectively, we all have the same issues and the same ultimate purpose and goal, and that is to make whatever community we’re in a better place.”

He said, he was proud to be affiliated with the university, which is on the rise internationally for its innovation and creativity.

“A collection like this is especially important to Canada and to our present time. We, here, have clearly benefited from the Civil Rights Movement and it is therefore important for us to remind ourselves and to continue to educate our larger community, as well as subsequent generations, of this fact,” he said.

Carol Sutherland of the Black Faculty and Staff Community Network and whose idea it was to have the exhibit, said, they wanted the project to have teachable moments, to capture some of the key events in the Civil Rights Movement, and they wanted to involve Ryerson students. 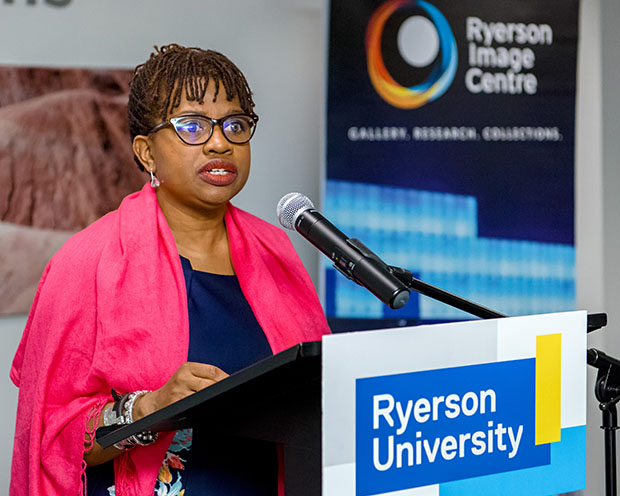 Carol Sutherland of the Ryerson Black Faculty and Staff Community Network speaking at the opening of the exhibition at the Ryerson Image Centre on March 22. Photo credit: Clifton Li.

They had many meetings where they shared ideas, photos were discussed and selected, and strategies unfolded.

“Our group was excited at the prospect of putting on this event. Through time, we didn’t know the scope of the project, the time commitment, or even the vision of how it would unfold. The vision will come that these moments in time would be a showcase to remind us of the journey and the struggle of the Civil Rights Movement, and how far we have come and how far we still have to go,” said Sutherland.

The mission of the Black Faculty and Staff Community Network is to mentor Black faculty and staff and support diversity at Ryerson.

Dr. O’Neil Green said, it is a mission that is shared by the entire community at Ryerson University.

The Ryerson Image Centre was, in part, created to display some of the 292,000 photos from the Black Star Collection, and includes a gallery, collections, teaching, research and exhibition spaces, and shares the building with the School of Image Arts.

The gallery was officially opened on September 29, 2012.