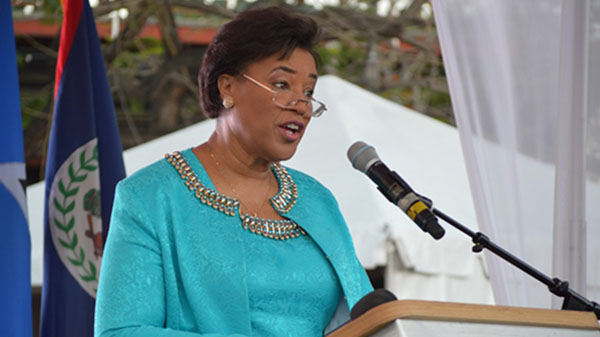 ST. JOHN’S, Antigua and Barbuda March 31, CMC – Baroness Patricia Scotland takes over as Commonwealth Secretary-General on April 1, with a pledge to foster unity among the member states.

In an interview with the Caribbean Media Corporation (CMC) on the eve of her taking office, the Baroness, 60, said promoting unity is priority one.

“The most important thing, I think, is to bring the whole Commonwealth together, so that we can take advantage of all the skills and the beauty and diversity that comes from our 53 different nation states and, of course, 31 one of those states are SIDS – small independent developing states, and I am so proud, as the Dominican candidate, (that) I am going to be leading the Commonwealth for the Caribbean and for everybody else too,” she said.

Scotland becomes the sixth Commonwealth Secretary-General and the first woman to serve in the post.

She was selected, in November, at the Commonwealth Heads of Government Meeting in Malta, after a hotly-contested race that, for a while, divided the 15-member CARICOM grouping. Antigua and Barbuda and several states were firm in their backing of Sir Ronald Sanders, a long-time diplomat and former high commissioner to the United Kingdom.

Speaking on the sidelines of the 15th Conference of Presidents and Governors-General of the Caribbean Region in St. John’s, the Baroness was confident that the Commonwealth had a role to play in the development of small states – particularly those in the Caribbean.

“We can join together. We have so much in common. We have the common law, the common language, common institutions, common values both enunciated in the Harare Principles and indeed in the new charter. So if we were to pool our opportunities, pool our intelligence, pool our technical ability, what can we not do if we choose? I think this is a huge opportunity for us all to come together and work together in unison,” she said.

The incoming Secretary-General takes office as the 53-member grouping grapples with numerous social, economic and developmental issues. While she remains confident the Commonwealth can face these challenges head-on, she is concerned about the vulnerability of member states and how the international community assesses the development of these states.

“I think it is really important for us to take, very seriously, the existential threat of climate change. If you look at what happened to Dominica last year…it was hit by Topical Storm Erica,” she said. “Dominica was not expecting a storm, but it affected 90 percent of Dominica’s GDP and caused more than half a billion dollars of damage (and) causing huge difficulty and trauma and death to the citizens of my country. What we know is that in the same year – 2015 – Dominica’s GDP grew by 4.5 percent.

“So if you were going to assess Dominica simply by GDP you would have no concept of the innate vulnerability of that economy. I think we need to do more to help the international community understand that GDP cannot be the only criteria. We have to look at the innate vulnerability of some of these islands so that the global community and the Commonwealth itself, can respond more directly, more helpfully, to the difficulties that are faced by small island states,” the incoming Commonwealth Secretary-General said.

Born in Dominica, Scotland was the 10th of 12 children of an Antiguan mother and a Dominican father. Her family moved to the United Kingdom when she was a toddler. She was raised in the UK, pursued studies in law and was called to the bar 1977.

The Baroness has a long history of breaking barriers. In 1991, she was the first Black woman to be made a Queens Counsel. She later became the first Black female government Minister in the United Kingdom and the first woman and Black person to become Attorney-General in that country.

Scotland was the featured speaker at the three-day talks here.

The heads of state discussed a number of topics including: the role and function of the Caribbean Court of Justice, the relationship between the crown and the Caribbean realms, the impact of global warming on small island states, the changing face of banking in the Caribbean and human rights issues in the Caribbean.