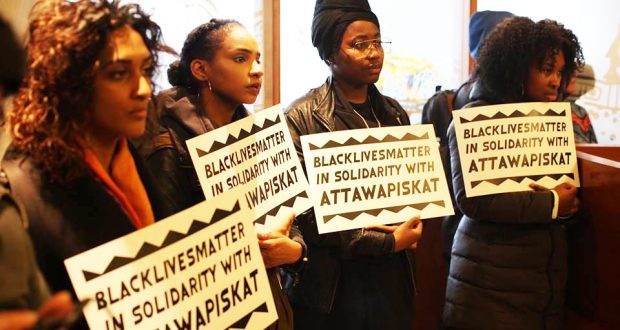 BLMTO members join Indigenous activists, who are occupying the office of Indigenous and Northern Affairs Canada, in Toronto. Photo submitted.

TORONTO, Ontario — On April 13, a group of about 30 people commenced an occupation of the office of Indigenous and Northern Affairs Canada, located at 25 St. Clair Avenue, East, in Toronto.

The protesters are demanding that Prime Minister Justin Trudeau address the current crisis in Attawapiskat, which is a First Nations community reeling with the pain and aftermath of a large number of suicides and suicide attempts over the past two weekends.

The Attawapiskat community has declared a state of emergency after reports of 11 suicide attempts, within a 24 hour period, in the community of approximately 2000 people.

It was further reported that on April 13, police interrupted an additional suicide pact between 13 young people in the community, including a nine-year-old.

“These are 10 year olds contemplating suicide,” said Dani Herbert, an organizer of the Indigenous activists, who are occupying the offices of Indigenous and Northern Affairs Canada (INAC).

Carolyn Bennett, the province’s Minister responsible for Indigenous and Northern Affairs, said, in an April 15 statement, posted on the government website: “We recognize the importance of the grassroots voices that are speaking up. We want to assure all Canadians we remain focused on the work that needs to continue in support of the community.

“The voices of the people of Attawapiskat are being heard. We will be visiting the community on Monday to meet with community members and youth leaders and determine with them how to address their immediate needs and chart a path forward.”

“Officials have been working with the First Nation, Nishnawbe Aski Nation and provincial colleagues to provide mental health and community supports to Attawapiskat and the individuals and families in need. We are also working together on longer term solutions to improve the quality of life for members of the community,” the Minister’s statement added.

The community of Attawapiskat recently made headlines when, in 2011, they were placed on bottled water after water service to the reserve was suspended, as a result of the community’s water becoming unsafe for consumption.

Since that time the problems on the reserve are reported to include inadequate housing, little or no employment opportunities and little to occupy the youth in the community. Included in the list of the protesters demands are a YMCA so that the youth will have something to occupy their time.

8Since day one of the occupation, both executives and supporters of the Black Lives Matter-Toronto (BLMTO)chapter have been visible, as they stand side by side with the Indigenous activists, helping to occupy the space.

Weeks prior, BLMTO set up camp outside the Metro Toronto Police headquarters on College Street and several members the Indigenous community were visible in their support for the human rights advocacy group.

The concept of community supporting community has yielded positive results for the BLMTO movement.

In recent days BLMTO has achieved a rear audience with Ontario Premier Kathleen Wynne, where she committed to a review of the Special Investigations Unit (SIU). Soon after, the Coroner’s office announced an inquest in the death of Andrew Loku.

In the last few days, BLMTO organisers announced that they met with the Provincial Anti-racism Minister, Michael Coteau, who committed to at least four public meetings. These meetings will include the Attorney General and the Minister of Community Safety.

The demand for the immediate release of the name of the officers involved in the  Andrew Loku shooting has yet to be met however, because the inquest in the death of Andrew Loku will be public, it is believed that the name will be obtained through the inquest.

It is further believed that the inquest process may take months to achieve this demand.

“What does it take for someone to be so deprived of things that should be theirs anyway, that they are contemplating suicide?” Herbert said to the diverse crowd — comprising of Indigenous, African Canadian and other community members — during an afternoon rally on April 16, in front of the INAC office in Toronto.

One cannot help but feel compelled to ask the question, if the situation in Attawapiskat was taking place in one of Canada’s larger cities and not the northern reserve of Attawapiskat, how would this article read differently?

If a lack of firefighters or nurses existed elsewhere in Canada, for as long as this problem has existed within the Indigenous communities, would we not expect a national strategy to have been in place by now?

Many will ask why, in a country as rich as Canada; a country that, until recently, had both the capability and the political will to run an oil pipeline all the way from Hardisty, Alberta to Steele City Nebraska.

Why is the same Canada unable to provide clean drinking water to every First Nations Reserve across the country?

To quote the late South African President, Nelson Mandela, “As long as poverty, injustice and gross inequality persist in our world, none of us can truly rest.”