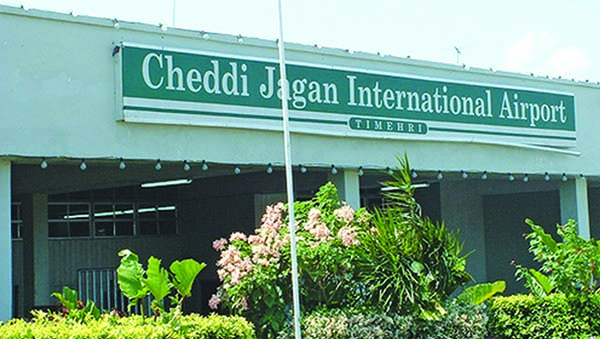 Plans are being made to convert the Cheddi Jagan International Airport into a hub for flights to South America from the United States? Photo credit: CMC.

NEW YORK, New York Apr. 28, (CMC) – Through the efforts of two airlines, plans are being made to convert the Cheddi Jagan International Airport into a hub for flights to South America from the United States.

The announcement was made, yesterday, by Chief Executive Officer of Roraima Airways, Captain Gerry Gouveia, at the unveiling of Guyana’s 50th Independence Anniversary logo on a Dynamic Airways plane, at the John F. Kennedy International Airport.

According to Gouveia, Roraima Airways and Dynamic Airways will be working together to make the hub a possibility.

He also dismissed a report from the InterAmerican Development Bank (IDB), that a hub would not be realistic.

“We are going to make Timehri International Airport the hub to feed traffic out of New York into Trinidad, Suriname, Boa Vista and Puerto Ordaz (in Venezuela), using that international airport that the IDB said cannot be used as a hub; we will make it into a hub,” he said.

Gouveia was quoted by Demerara Waves Online News, as saying that Dynamic Airways would sell tickets from the United States for tickets to Suriname, Trinidad, Venezuela and Brazil.

“With an inter-line arrangement that we are developing in Guyana, when the aircraft arrives at Timehri, the passengers for Boa Vista (Brazil), the passengers for Suriname will come off that plane. While Guyanese passengers go home, they will board another flight and then they will fan-out into the neighbouring countries, using Timehri as the connecting hub back into North America,” he said, adding that InselAir would offer the connections to Boa Vista, next month, from the Dutch Caribbean.

Concerning Suriname, he said Roraima Airways would fly passengers aboard its recently acquired Trislander to and from Zorg-en-Hoop airport in Suriname to connect to flights in Guyana.

Chief Operating Officer of Dynamic Airways, Karen Klaus, told Demerara Waves Online News that her carrier would be assigning more aircraft to partner with Roraima Airways “to feed into all those other cities.”

In his remarks, Guyana’s Permanent Representative to the United Nations ,Ambassador George Talbot, pointed to the significant engagement by Guyana at the UN and Guyanese internationally.

“Guyana’s engagement has been official but also through the actions of its citizens and as a result, one might say that Guyana is arguably home to one of the most internationally mobile populations in the world and, on a per capita basis, may be having one of the largest diasporas internationally.”

He noted that there are at least 140,000 Guyanese living in New York.