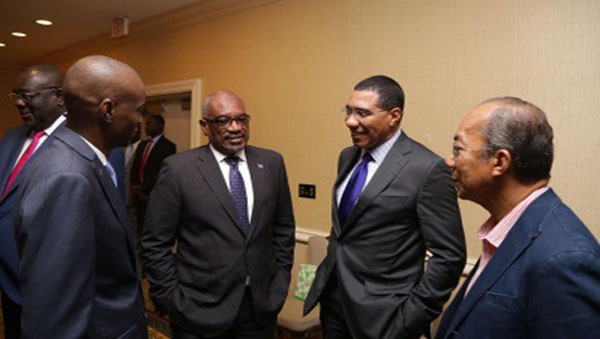 Antigua And Barbuda Warns Of Splitting CARICOM On Venezuela Issue

ST. JOHN’S, Antigua and Barbuda, March 22, 2019 (CMC) – The Antigua and Barbuda government says, it is regrettable that the firm, united position, adopted by Caribbean Community (CARICOM) leaders, on the situation in Venezuela, appears to be breaking apart.

Five Caribbean leaders — from the Dominican Republic, Haiti, Jamaica, St. Lucia and The Bahamas — are due to meet with United States President, Donald Trump, today, to discuss Venezuela, with Washington indicating that the talks show support for a joint effort to remove President Nicolas Maduro, in favour of the Opposition Leader, Juan Guaidó, who has declared himself the interim-president of the South American country.

CARICOM leaders at their inter-sessional summit in St. Kitts-Nevis, last month, had reiterated their position of non-interference in the internal affairs of Venezuela, and said they were prepared to mediate in the process to bring about a peaceful resolution to the crisis.

Speaking to reporters at the end of the weekly Cabinet meeting, Information Minister, Melford Nicholas, reiterated Antigua and Barbuda’s position of non-interference in Caracas and support for the CARICOM position on the matter, despite Trump’s intent for the meeting with the Caribbean leaders.

“It is what it is. We cannot boost the intent of Mr. Trump and what he intends to do. But so far as Antigua and Barbuda is concerned, wherever we have to be engaged with international powers, in any hemisphere or in any inter-agency, we take positions, based on principles,” Nicholas said.

“We do not consider ourselves hostile to any country,” he added

He said, it was for those attending that meeting, to indicate how that will be achieved, but “what we are going to do resolutely and without apology, as a tiny speck on the world’s map…is to stand with the principles of the United Nations, where we all have signed on and accepted as the best way for peace and security, not only in our region, but the world”.

Four countries — Haiti, Jamaica, St. Lucia and The Bahamas — had also voted, in January, at the Organisation of American States (OAS), not to recognise Maduro’s second term in office.

The White House said that the meeting on Friday would also discuss China’s economic role in the region, and Information Minister Nicholas said that Washington’s criticism of Beijing does not reflect the support the Asian country has given to the region.

“More importantly, with respect to the United Nations criticism of China’s incursion into this part of the world and the development assistance, the diplomacy of China is different from what we expect from the United States.

“The Prime Minister made this position clear before, as China has put hard currency and supported our development, where it is clear to track, over the past 25 years, the benefits that our relationship with China has spawned,” he added.

Prime Minister, Gaston Browne, responding to concerns, raised by US Secretary of State Michael R. Pompeo, about accepting gifts from China, said that Washington should provide more aid to these nations and not spend billions on useless wars.

“Those, who are opposed to China’s deepening influence in the hemisphere, need to talk less and, perhaps, they need to put some diplomatic dollars or development assistance … on the table.

“Perhaps they may wish to consider spending less on artillery. Spend less on useless wars and interventions … in the affairs of other states and to utilise the savings to help underprivileged countries here, in the Caribbean, and elsewhere,” he said.

Earlier this week, Dominica’s Prime Minister, Roosevelt Skerrit, praised China for its support of his hurricane-battered country, saying “there are times when other interests, other countries, will want to create a wedge between Dominica and China or a certain degree of mistrust among our peoples, especially in relation to the aid and the assistance, which China has been providing, not only to Dominica but to more than 190 countries around the world”.