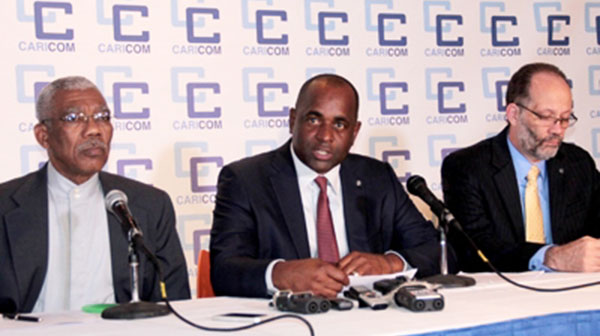 CARICOM Chairman and Dominica’s Prime Minister, Roosevelt Skerrit, said that the leaders had agreed on the need for “comprehensive review” of the 10-year-old CARICOM Single Market and Economy (CSME) that allows for the free movement of goods, skills, labour and services across the region.

He said that the results of the review will be considered at the Inter-sessional Summit, scheduled for Guyana in February next year.

“In the meantime, there will be an intensified public education campaign in member states, aimed at all levels of the society. The program will highlight the benefits and provisions of the CSME,” Skerrit said, adding that the CARICOM Commission on the Economy had also reported to the leaders and “set out several recommendations, aimed at fiscal sustainability, private sector stimulation, improving the business regulatory environment, moving towards sustainable growth and resource mobilisation.

Skerrit told reporters that CARICOM leaders are “fully committed to implementing all elements of the CSME regime, as we remain convinced it is our only option to achieve sustainable growth and development”.

On the issue of security, Skerrit said that the summit had been brought up-to-date on major issues, and agreed on ways to deepen and strengthen cooperation in this area.

“We approved a review of the CARICOM Crime and Security Strategy (CCSS) and discussed ways of ensuring that there was co-ordination between national security plans and the strategy,” Skerrit said, noting that the Implementation Agency for Crime and Security (IMPACS) continues to play an important role in the region’s efforts to address crime and security.

He said that the leaders also agreed that “urgent steps should be taken for completion of a number of critical regional agreements,” and, have put as a priority, completing the CARICOM Arrest Warrant Treaty.

“This is as essential instrument to address cross-border (issues) and we look forward to finalizing it before the end of the year,” he said.

On the issue of free movement, Skerrit said that even though the overwhelming majority of citizens are moving throughout the Community without hindrance, “we do have instances of denial of entry at our ports”.

“It is a matter that has to be addressed, urgently, as we are aware of the negative views that surface when these instances occur. We have guidance from the Caribbean Court of Justice, as well as from decisions which Conference has taken.

“We have mandated the CARICOM Secretariat to bring together the Chief Immigration Officers, CARICOM Ambassadors and other relevant officials, to fashion a solution to the issue,” he said. 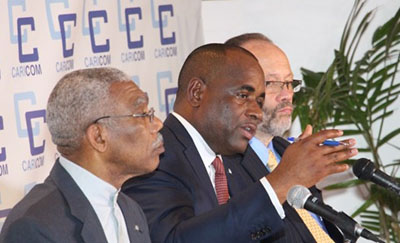 One of the major items discussed at the summit was Correspondent Banking Relationships (CBR) that Guyana’s President, David Granger, told reporters “remains a very serious issue”.

“But we must find a solution, given its effect on our financial and trading systems in particular,” Granger said, adding that the loss of CBRs is “severely affecting member states”.

Regional countries have warned that CBRs, which enable the provision of domestic and cross-border payments — and terminated in some jurisdictions — could adversely affect their economic development, and have been making representations to countries such as the United States in a bid to reverse that situation.

Antigua and Barbuda Prime Minister, Gaston Browne, who is leading the CARICOM initiative on the matter, told the Caribbean Media Corporation (CMC), on Tuesday, that his committee would be recommending to regional leaders, at their summit here, the staging “of a global stakeholder conference, which will bring all the stakeholders together.

“We are also looking at the possibility of engaging different advocacy groups in the United States and Britain to ensure that we get across our message effectively,” he said, noting that the Caribbean’s position could be further enhanced with the various charities and foundations complaining of their inability to do business because of the CBRs situation”.

Regarding Britain’s decision to leave the European Union, the regional leaders noted that “as expected the implications of Brexit for the Community was discussed although that situation unfolds daily”.

“We are confident that the United Kingdom and the European Union will remain strong and valued partners of the Caribbean Community,” Skerrit said.

He added, while CARICOM is pleased with the developments surrounding improved diplomatic relations between Cuba and the United States, the region is still adamant that Washington lift its decades-old embargo on the Caribbean communist country.

“In that new environment in Cuba, we recognise the need to seize the trade, business and investment opportunities, including those in tourism,” Skerrit said, adding that the leaders had agreed “that every effort will be made to conclude negotiations for a second protocol to the Trade and Economic Cooperation Agreement to allow for it to be signed before the end of 2016”.

The regional leaders have also agreed to issue separate statements, regarding the border disputes involving Belize and Guatemala and Guyana and Venezuela.

Skerrit said that the meeting also discussed the issue of health in the region and endorsed the “Every Caribbean Girl, Every Caribbean Woman Initiative (ECGECW)”, intended to address key sexual and reproductive health concerns of girls and women in the Caribbean.