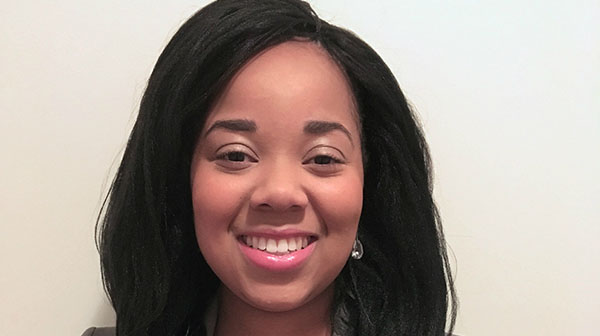 Chauntae De Gannes is passionate about youth engagement and is a beacon of hope and progress for young men and women. Photo contributed.

Chauntae De Gannes: A Daughter Of The Vote

AJAX, Ontario March 3, 2017 — Hard working, ambitious and an exemplary leader, Chauntae De Gannes, a first year Political Science and Sociology student of Queens University, has been selected by The Adjudication Committee for Ontario, to represent her Ajax riding as a participant in ‘Daughters of The Vote’, a program federally funded by the Department of Canadian Heritage, and initiated by Equal Voice.

Equal Voice is a national, bilingual, multi-partisan organization, founded in 2001, that is dedicated to electing more women to all levels of political office in Canada.

It regards the equal representation of women in Canada’s Parliament, in its provincial/territorial legislatures, and in its municipal and band councils, as a fundamental question of fairness for women, in terms of their access to Canada’s democratic institutions.

The organisation brings men and women together, from across the political spectrum, in its nine regional chapters across the country, and it has a dynamic national youth chapter. Its National Advisory Board includes some of Canada’s most prominent women politicians – all ground breakers in their time – representing three political parties.

Daughters of the Vote will celebrate International Women’s Day with a week-long schedule of daily activities in Ottawa from Sunday, March 5 to Friday March 10.

Next Wednesday, March 8, International Women’s Day, the ‘Daughters of the Vote’ will participate in a march from the National Arts Centre to Parliament Hill before being historically seated in The House of Commons, to be addressed by Canada’s first female Prime Minister, Kim Campbell.

They will meet their Members of Parliament, tour the Centre Block and attend question period, after which they will enjoy an International Women’s Day Dinner Reception, sponsored by Status of Women Canada.

This historic and ambitious initiative, ‘Daughters of The Vote’ (DOV), will mark the 100th anniversary of women’s formal federal political engagement – along with Canada’s 150th birthday.

It is easy to see why De Gannes was selected as a Daughter of the Vote for Ontario; she has an impressive record of school and community participation.

Although extremely busy with her studies, and currently working as an Intern for the Academics Commission with the Arts and Science Undergraduate Society (ASUS) at Queens University, De Gannes still finds time to be engaged in several educational and career enhancement activities.

This speaks well of her organizational and time management skills, which are of utmost importance in today’s political world.

She recently participated, as a delegate, in Queens Female Leadership in Politics (QFLIP) conference, whose objective was to raise and empower the next generation of political leaders, by providing an innovative and encouraging environment for young women to use their passions to exact positive change in Canada.

At this conference, De Gannes was the recipient of The Prime Minister’s Award, given to the delegate who demonstrated the most passion and participated, exceptionally, in all conference activities.

In 2014, she was one of 60 students appointed to sit on the Minister’s Student Advisory Council (MSAC), to advise and encourage the Minister of Education to ensure a top quality education for Ontario schools, and participated in the Legislative Assembly of Ontario Model Parliament in 2015.

Later, she became a Youth Facilitator with the Ministry of Education and the Ontario Educational Leadership Centre, contributing ideas to improve the educational components of Ontario school system.

In 2016, she served as a Supervising Team Leader and an ambassador for the Durham Regional Police Service’s ‘Youth in Policing’ initiative, and was also chosen to be The Town of Ajax Youth Week Ambassador.

Also, during her high school years, she was President of Notre Dame C.S.S. Student Athletic Association; Founding President of the first ever Student Voice Club; volunteered as a coach for junior and senior co-ed soccer teams, and played basketball, volleyball, soccer, badminton and softball.

During 2016, before heading off to Queens University, she was selected as Valedictorian for her high school class of 2016; obtained Parliamentary recognition for outstanding citizenship, leadership and community involvement by MP, Mark Holland and MPP, Joe Dickson; and was the recipient of the following scholarships: the Herbert H. Carnegie Future Aces Foundation Scholarship and Citizenship Award; the Association of Black Law Enforcers (ABLE); West end Sports and Cultural Club; Congress of Black Women Canada; Trinidad and Tobago Association of Ontario; Loblaw’s Scholarship Program; Notre Dame Principal’s Award for Student Leadership; Durham Outreach Multicultural Association Bursary; and the Ontario Hyundai Scholarship Program. 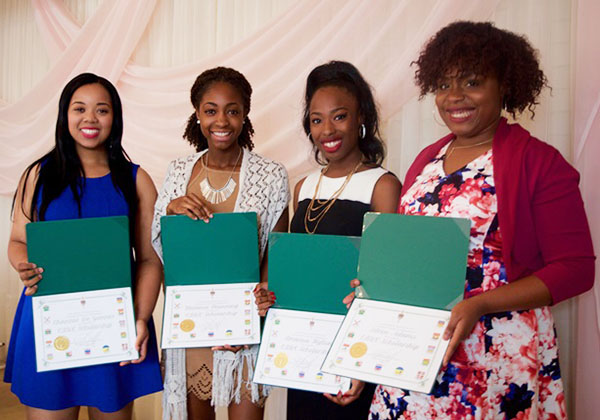 Chauntae De Gannes, left, join other scholarship winners (from left to right) Melanie Manning, Brianna Hylton and Eileen Adams, as they display the scholarship awards they received from the Congress of Black Women of Canada (Ajax-Pickering chapter). Photo courtesy of (CBWC).

The Daughter of the Vote is designed to ensure that 338 emerging young women leaders, between the ages of 18 and 23, become familiar with Canada’s political institutions and those currently serving in them.

These young women will take their place in Parliament from coast to coast, literally. One young woman has been chosen from every federal riding in Canada to represent her community and to communicate her vision for Canada.

Although women’s rights have progressed as proven also by De Gannes’s success, there is still more work to be done in this area. Their journey in political participation is definitely a work in progress, as statistics demonstrate that the percentage of women elected as Members of Canada’s Parliament was as little as 26 percent.

And there is an average of only 28 percent of women elected to legislatures of all Canadian provinces and territories. In the case of Canada’s mayors, the representation of women is only 18%.

De Gannes is the daughter of Justice of the Peace, Martha DeGannes, and granddaughter of Felicia London, the recipient of the 2016 Matilda Van Cooten Award for Excellence in Parenting, presented by the African Canadian Achievement Awards of Excellence.

She is passionate about youth engagement and is involved with the Arts and Science Undergraduate Society and the Queen’s Female Leadership in Politics.

She aspires to become a successful lawyer and hopes to use her ‘Daughter of The Vote’ experience to inspire and empower other young women from across the country to be ambassadors for change.

As De Gannes continues to be a beacon of hope and progress for youth, she had laid down the foundation necessary for growth and success in the legal field and, subsequently, into becoming one of Canada’s most influential politicians.

For more information on Daughters of the Vote, please visit: www.daughtersofthevote.ca/