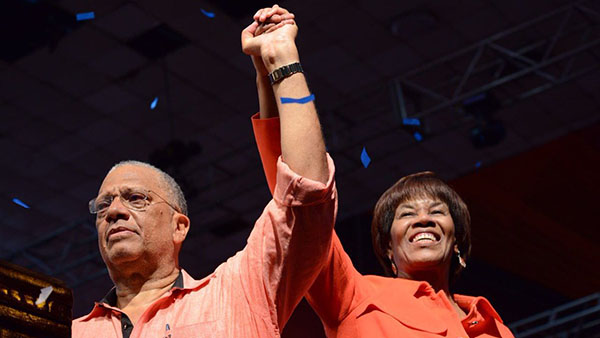 Last Sunday, during a special delegates conference at the National Arena, Dr. Peter Phillips was elected as the fifth president of the 78-year-old party, taking over from Portia Simpson Miller, who led the party since 2006.

In her final address as president, Simpson Miller urged supporters to stand beside their new leader.

“He is your new leader, and he will need you as much as I needed you,” she urged.

Simpson Miller, who was the island’s first female Prime Minister on two occasions, thanked the crowd for standing with her over the years.

“It has been a privilege of a lifetime to have served as your president. I will never forget you …” she said in an emotional speech – her final as party leader.

Phillips took a public oath of office upon assuming the presidency, which was administered by former PNP President and Prime Minister, P.J. Patterson, who said the new party president will not be alone in fixing the internal problems.

“We are certain that the road will be rocky. But we cannot allow progress to falter, nor our energy to wane,” said Patterson.

The former Prime Minister also said Phillips must tackle a “new frontier” that involves the eradication of poverty and ignorance, while fighting against corruption, discrimination and exploitation.

According to Patterson, the PNP must also deal with issues related to crime and violence.

Shortly after begin sworn, Phillips,68, thanked both Simpson Miller and Patterson and pledged to addressed several pressing matters including poverty and homelessness.

Michael Manley, Patterson and Simpson Miller served as Prime Ministers while Norman Manley served as Chief Minister, from 1955 to 1959, and later Premier from 1959 to 1962 .

Simpson Miller will step down as leader of the opposition on April 2.