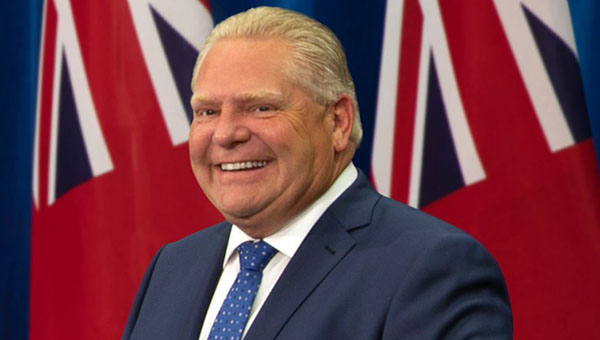 Why has the Doug Ford government of Ontario been so reluctant to take action, amid the second wave of COVID-19?

Ontario’s Progressive Conservative government has come to be defined by two things: its hesitant responses to the emerging second wave of COVID-19 and its relentlessly pro-business approach to virtually all other matters.

The situation invites the question of whether the government’s stumbling reluctance to impose more restrictive measures to head off the growing numbers of COVID-19 infections, as recommended by medical experts from across the province, is a product of its pro-business orientation.

On the COVID-19 front, recent days have been defined by some deeply disturbing trends: record daily rates of new infections; an already fatal reappearance of the virus in long-term care facilities; and projections of uncontrolled infection rates exceeding 6,500 cases per day, which will overwhelm hospital and intensive care unit capacity. Although the news of potentially effective vaccines is encouraging, their widespread availability seems many months off.

It was then revealed that the province had ignored the advice of its own public health agency in terms of the infection rates needed to trigger further restrictions. The recommended thresholds for restrictions were reportedly increased by a factor of four relative to the advice received by the province from its own public health agency.The provincial government’s responses to the situation have been surprisingly feeble. The province was actually moving in the direction of easing restrictions, particularly around public gathering spaces like restaurants, bars, gyms and places of worship, despite warnings that these could be key points of transmission.

Taking the fall?
The imposition of further restrictions has been left in the hands of local medical officers of health despite the limited legal authority available to them. The province, it seemed, was prepared to let them take the political fall for the imposition of potentially unpopular restrictions.

The catastrophic projections released on Nov. 13 brought a partial turnaround by the province in terms of the thresholds for additional restrictions. But the government’s approach is still falling well short of what health authorities and experts are saying is needed to prevent disaster.

As if to add insult to injury, Ontario is poised to pass legislation that would effectively grant long-term care home owners and operators immunity from liability for the more than 1,800 resident deaths that occurred in their facilities during the first COVID-19 wave.

There is strong evidence that a significant portion of those fatalities were the result of neglect and poor care, rather than COVID-19 itself.

The province has extensive authority over public health matters, as well as a range of other legal and policy tools at its disposal to combat the virus. And on the surface, the government has consistently expressed concern and distress over the impacts of COVID-19 on its victims. Yet it had to be pushed into partial action by the recent outcry from the media and health experts over its failing responses.

Pro-business arguments
Why? The answer may lie with Ford’s stance on issues beyond the pandemic. The essential feature of the Ford government has been its striking responsiveness to any argument presented to it from pro-business advocates and framed in terms of economic development.

The government has seemed particularly sympathetic to the pleas of small business owners, such as restaurants, bars and gyms, that would be affected by further shutdowns, despite the potentially significant roles these types of facilities could play in the spread of COVID-19.

The government’s record on the environment in this context is well-known: the shredding of Ontario’s climate change strategy; the elimination of the independent office of the environmental commissioner; the weakening or elimination of regulations on endangered species, forestry and toxic chemicals; and the evisceration of longstanding rules on industrial water pollution and environmental assessment.

Most striking of these tendencies has been the government’s willingness to acquiesce to the demands presented to it by the land development industry. Planning rules intended to curb urban sprawl in the Greater Toronto Area have been gutted.

The province has made unprecedented moves to reach deep into local municipal plans on behalf of development interests to eliminate constraints and permit ever greater development in areas like midtown Toronto that are already subject to intensive development pressures.

Ministerial zoning orders have been used with unprecedented frequency to override municipal and provincial rules on specific sites, most recently permitting a warehouse development in an environmentally significant wetland on Pickering’s Lake Ontario shoreline.

Provisions buried in the government’s November 2020 budget bill would undermine the role of local conservation authorities in controlling development for lands that are at risk of flooding and other hazards — significant considerations in the age of climate change — as well as for wetlands and shorelines.

Sympathetic to business owners
The same unapologetic pro-business orientation seems to lie at the heart of the government’s response to the COVID-19 crisis.

The government has seemed particularly sympathetic to the pleas of small business owners, such as restaurants, bars and gyms, that would be affected by further shutdowns, despite the potentially significant roles these types of facilities could play in the spread of COVID-19.

That’s profoundly short-sighted, laying the groundwork for disastrous runaway outbreaks like those occurring in the United States. Those types of outbreaks may only be able to be controlled, if at all, through the types of draconian and long-term lockdowns seen in places like Melbourne, Australia. The impact would be far more damaging to businesses than additional short-term restrictions.

A more effective and balanced approach would recognize the need for far greater restrictions in the short term, while working with the federal government to provide support to affected employees and helping businesses move their operations to take-out, delivery, curbside pickup and online services wherever possible.

Events in the U.S. and Europe are demonstrating just how bad a second COVID-19 wave could be. If the Ford government acts decisively, it may still be able to avoid the same fate, but time is running out quickly.