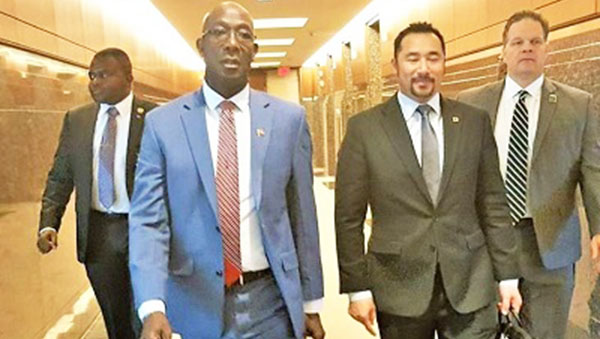 PORT OF SPAIN, Trinidad and Tobago, March 31, 2017 (CMC) – Prime Minister, Dr. Keith Rowley, today, wrapped up his visit to the United States, getting the US-based oil and gas company, EOG Resources, to begin drilling, immediately, on a well in Trinidad and Tobago that had previously been placed on standby.

According to the statement, as a result of the talks with EOG Resources Chairman, William Thomas, an agreement was reached on future gas, with Thomas giving immediate instructions that drilling commence on a well that was previously on standby.

The EOG Resources chairman also gave the go ahead for the commencement of additional, significant seismic work.

The statement quoted Rowley as urging the company to move, with alacrity, to work towards increasing gas production and addressing the current shortage issue.

“EOG responded very positively to this and the parties agreed that conversations would continue towards increased exploration and production.

“This will go a long way towards realising the Prime Minister’s vision, of cementing Trinidad and Tobago’s continued role as a place for investment in the hydrocarbon industry,” the statement added.

It said, “EOG Resources has been operating in Trinidad and Tobago for 25 years, and has expressed a keen interest in expanding operations and increasing their investment here.”

The statement said, regarding the meeting with ExxonMobil that is responsible for leading the discoveries of substantial oil reserves in Guyana, over the last two years, Rowley noted Trinidad and Tobago is ideally positioned to play a key role in assisting with Guyana’s hydrocarbon future.

“Our location, refinery, deep water harbours, access to markets and expertise in the energy sector all make us the best candidate for partnership with our neighbour,” the statement quoted him as saying, during the talks with the senior ExxonMobil officials.

The statement said that Rowley “invited the Exxon Mobil team to visit Trinidad and Tobago, and assess for themselves, our readiness to partner with Guyana”, and that the invitation had been accepted.