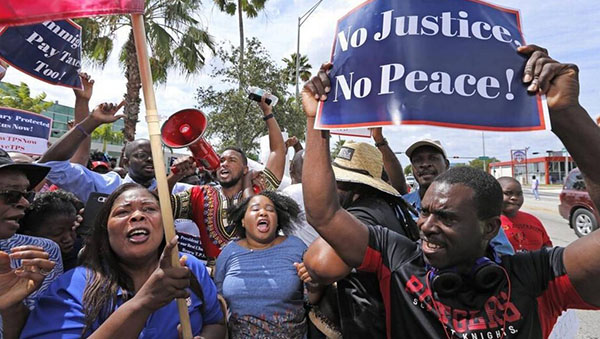 Protesters from across South Florida, who met in front of the US Citizenship and Immigration Services office, recalled Trump’s pledge to be their “greatest champions”, as they gathered in Little Haiti, early Saturday, to rally for the extension of Temporary Protected Status (TPS) for Haitians.

The immigration designation — granted by the Obama administration after the 2010 earthquake that left more than 300,000 dead, 300,000 injured and 1.5 million homeless — allows Haitians to live and work, freely, in the United States.

It said if the designation were to be revoked, the 58,000 members of the program will be deported to a nation, where more than 40,000 people live in makeshift shelters and tent homes.

The Miami Herald reports that a decision on extending TPS for Haitians could come as soon as this coming week, although the Department of Homeland Security has until May 23 — 60 days before the program’s July 22 expiration.

One of rally’s organizers, Marleine Bastien, head of Haitian Women of Miami, led the crowd in a chant, which loosely translated to “Give us justice. Give us TPS and don’t let us down”.

Protesters danced to music blasted from speakers or made by a crowd of musicians on drums and cymbals, chanted “TPS Now, Donald Trump,” and marched in circles on the stretch of Northwest Seventh Avenue in front of the immigration office.

“If he wants to step up to the plate and score for us, now is the time,” said Salusa Basquin, a 50-year-old teacher who moved to South Florida from Haiti in 1980, told the Herald.

Valerie Charlier, 25, brought her 4-year-old son, DJ Morris, to the protest. When he asked his mom why they were there, she told him, “because our people are going to be sent back to nothing”.

The Herald said Miami Commissioner, Keon Hardemon, used his turn at the microphone to tell the crowd that “everybody” should support the renewal of TPS.

“Anybody with a conscience knows that Haiti has not recovered from its natural disasters,” he said.

The protest came amid reports that the Trump administration is seeking the criminal history of Haitians, as fears intensify that the administration will not extend TPS for Haitian nationals living illegally in the US.

The US Department of Homeland Security (DHS) has acknowledged compiling evidence on the crimes committed by Haitians enrolled in TPS.

This has sparked outrage among members of US Congress and Haitian immigrant advocates.

Last week, the Associated Press (AP) published portions of internal emails from the US Citizenship and Immigration Services (USCIS) indicating that the agency has made inquiries into the Haitian community’s criminal history.

The emails also reveal that the agency wants to know how many of the 58,000 Haitians enrolled in the TPS program are taking advantage of public benefits, which they are not eligible to receive.

It said the revelation follows the creation of a DHS-run Victims of Immigration Crime Engagement (VOICE) office to help victims of crimes, committed by immigrants, and on the heels of a recommendation by United States Citizenship and Immigration Services’ (USCIS) acting director, James McCament, to terminate TPS for Haitians, as of January.

McCament made the recommendation to DHS Secretary, John Kelly, in a memo last month.

The AP said that, while the move is considered to be unorthodox, it suggests that Kelly might be looking at other criteria, in deciding whether the United States should continue the program for Haitians.