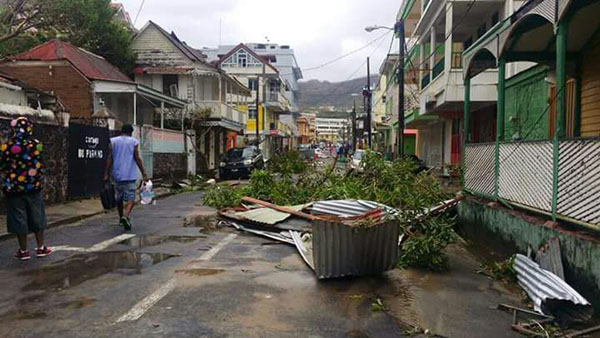 ROSEAU, Dominica, September 22, 2017 (CMC) – Martin Dell is unapologetic when it comes to begging, after Hurricane Maria.

“Man, we need all the help we can get. Man, I have been crying for days. I have been looting food. I have no choice it is a hard time — not even water,” he told the Caribbean Media Corporation (CMC), yesterday, as he and others watch, as several people began looting a shop in the heart of the capital.

One other person, who did not want to be identified, said that Hurricane Maria, which tore into the island as a Category 5 Storm on Monday night, has left behind, not only destroyed houses, broken bridges, uprooted trees, torn roofs, but also broken lives.

“Everything gone in Dominica, I tell you. My house gone, everything gone, my bank book, my car. My brother, I have a child, a boy, I have to think about him,” he says, insisting that Dominica is “indeed broken”.

The hurricane tore into the island, just as it was recovering from the ravages of Tropical Storm, Erika, that killed at least 30 people and left hundreds of millions of dollars in damages, two years ago.

From the air, the country looks like a total war zone. As the British Military helicopter hovers over the capital, on its way down to Windsor Park Stadium that was built a few years ago, with tremendous funding from overseas donors, the magnitude of the damage becomes real. 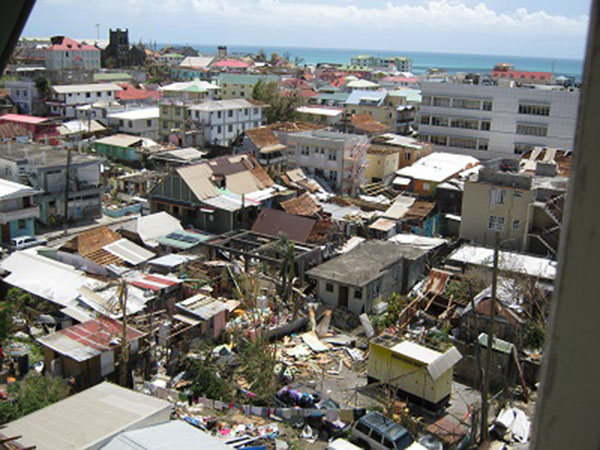 The hills are no longer lush green, but brown, and the trees that once bent gently in the afternoon breeze, are no more. Instead, tree stumps shoot out, as if begging for forgiveness.

The authorities have not yet been able to make their way to other parts of the capital and, yesterday, efforts were underway to try to get the road, leading from the Douglas Charles airport to the capital, re-opened.

“The disaster is total,” said Caribbean Community (CARICOM) Secretary General, Irwin la Rocque, a Dominican, who was among several officials on board the helicopter, coming to have a firsthand view of the damage, caused by Maria when it hit the islands with winds of over 180 miles per hour (mph).

“I have seen some other aerial pictures, taken by the Regional Security System (RSS), and not a single village, not a single area has been spared, “ La Rocque added, acknowledging too, that his house did not escape the fury of the storm.

“There is not a community that has not been affected in Dominica,” he told CMC, while the executive director of the Barbados-based Caribbean Disaster Emergency Response Agency (CDERA), Ronald Jackson, who was also on the helicopter, noted “it is certainly confirming the widespread devastation”.

“A lot of people have lost their roofs. We have not been getting in much supplies to help the people,” he said, adding “it is only now that you are on the ground you will understand how challenging the reconstruction will be”.

“It is one of the most powerful storms to hit the Caribbean and, obviously, the challenges presented by the terrain of Dominica, makes it that even more devastating,” Jackson pointed out.

The former secretary general of the Caribbean Congress of Labour (CCL), Kertist Augustus, wanted to assure his former regional and international colleagues that he had survived the storm, and that the ghost of Hurricane David has again come to haunt Dominicans.

“But for everyone, I want them to stay as strong as possible. Once you have life, you will be able to get back to where you were,” he said, hoping there will be assistance from the regional and international affiliates.

Augustus — who like several other Dominicans, were carrying buckets of water to deal with the situation caused by the storm — said that it is indeed going to be difficult, because “some of us remember what transpired with David in 1979. Maria in 2017, is 10, 20, 30 times worse, and we would have to get together with the people of the country, the leadership of the country, and all interested people in the country, to formulate a strategy to carry us forward”.

Most, if not all, of the hotels on the island, are either severely damaged or destroyed.

Marvin James, the general manager of the Fort Young Hotel that overlooked the harbour, told CMC “we have lost quite a bit of our rooms”.

‘We have 51 guests on the property from all nationalities. They are still here waiting for word to get out of the country. For us that’s the main objective, so that we can begin the recovery project,” she added.

The nearby Garraway Hotel did not fare any better, and so too many of the churches in the capital, including the Anglican Church that was destroyed when David struck in 1979, and the Roman Catholic Church that was being rehabilitated under a multi-million dollar project.

Prime Minister, Roosevelt Skerrit, whose home also failed to withstand the fury of Maria, has gone to neighbouring Antigua and Barbuda to deliver a message through the media there, to the Diaspora, and is due to travel to the United States to address the United Nationals General Assembly (UNGA), along with his partner leader from Antigua and Barbuda, Prime Minister Gaston Browne, on international assistance to rebuild their countries.

The state-owned DBS radio, which was knocked out during the storm, has resumed broadcasting, albeit with the coverage confined mainly to the capital.