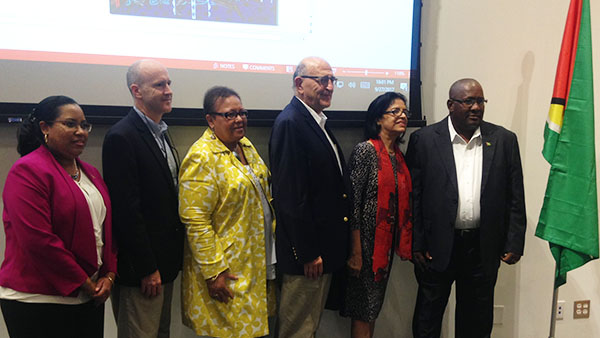 The International Organisation on Migration (IOM) and the Guyana Ministry of Foreign Affairs are collaborating to finalize Guyana’s Diaspora Engagement Strategy, aiming to develop an enhanced and sustainable relationship between the Guyana government and its overseas Diaspora.

The purpose of the meeting was to afford Guyanese the opportunity to contribute their views to the elements of the current Draft Strategy.

Forty members of the Guyanese Diaspora were in attendance, aiming to view the Draft Diaspora Engagement Strategy and provide input to its content but, unfortunately, a copy of the Draft was not available. 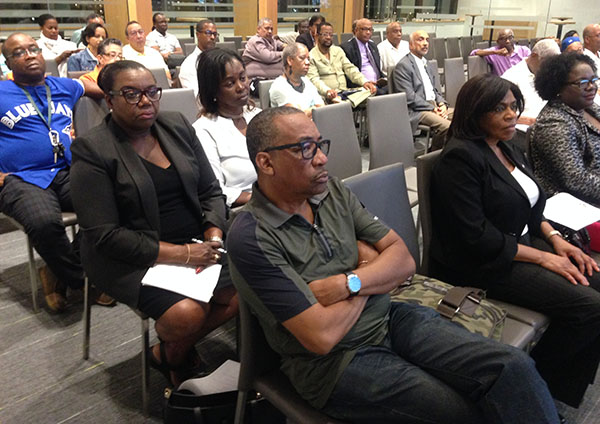 A section of the Guyana Diaspora in Toronto that attended the “consultative meeting” on September 27. Photo by Sharmon Carrington.

The meeting was chaired by Gillian Williams, who, after the usual formalities, indicated that the meeting was a validation and an interim report of the Diaspora Strategy, which the IOM and the Centre for International Migration and Integration (CIMI) had been working on with the Ministry of Foreign Affairs.

High Commissioner Riehl opened the meeting, citing that more than half of Guyana’s population is living abroad, and referred to the migration as a brain drain, which does not only apply to Guyana.

Humourously, she commented that Canada and the United States are usually referred to as “Region 11”.

She noted that many Guyanese are well educated, well positioned and resourced, and are not only ready to give back, but are giving back to the country of their birth.

“Therefore,” she said, “the government has decided, via The Diaspora Engagement Strategy, to better harness these benefits to the mutual satisfaction of its citizens at home and abroad.”

Hence the acquired no-cost services of the IOM to develop a Draft Diaspora Engagement Strategy Action Plan, which would straddle several ministries – Business and Tourism, Citizenship, Finance and Public Security — aiming to put Diaspora matters on a more structured basis.

Brotherson, in his address, provided a perspective of The Diaspora Unit and advised that the Draft Diaspora Engagement Strategy is currently receiving the attention of a Cabinet Sub-Committee, chaired by the Minister of Foreign Affairs, Carl Greenidge.

He advised that he was heartened by the interest shown on behalf of the Diaspora, and mentioned that their participation is in response to another tangible effort, on the part of the Guyana government, to buttress its efforts in further strategically and sustainably engaging with the Guyanese Diaspora.

“The Diaspora is part of Guyana, it is Guyana, and therefore, our collaborative effort should not result in a relationship that is skewed. We, in the capital, only look at what we can have, but what is needed is reciprocity,” he stated.

The Diaspora Unit Head revealed that, in a conversation with President Granger a few nights ago, he (the president) commented that what we seek are your skills and expertise, not only your pocket book (not his exact words)”. 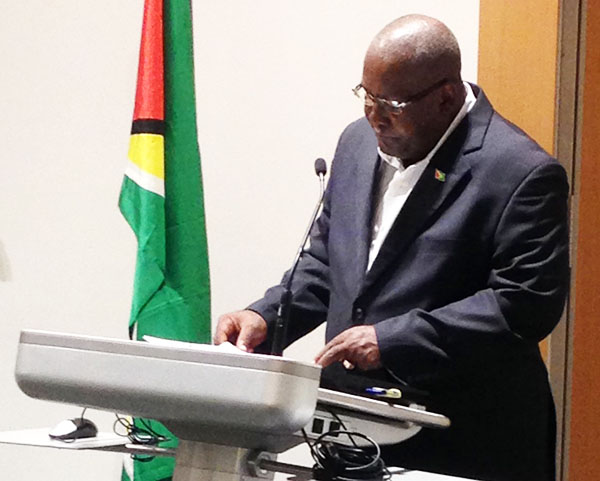 Brotherson further stated that the consultative meeting was more than a testimony to the efforts of the government’s stated commitment — espousing the Diaspora as an integral stakeholder in the affairs and national development efforts of Guyana.

The government has envisaged a Diaspora engagement paradigm that is inclusive and comprehensive, he added.

It seems obvious that engaging the Diaspora is not a new phenomenon and it is becoming the focus for many nations, including developing countries like Guyana.

And Brotherson claimed that the view of the Foreign Ministry is that the evidence-based approach to Diaspora Engagement has helped to ensure the concept is strategically factored into the economic and social development plans of the nation.

The government can only have the Diaspora’s interest at heart, if it seeks to maximize that interest by speaking to the Diaspora to obtain it views and feedback.

Furthermore, the available skills, expertise, resources, philanthropy, real and potential investments and the international advocacy on behalf of the country, are only a few of the incontestable and sustainable benefits that do ensue from structured Diaspora engagement, and all collaborative efforts will compliment what is being done in Guyana. 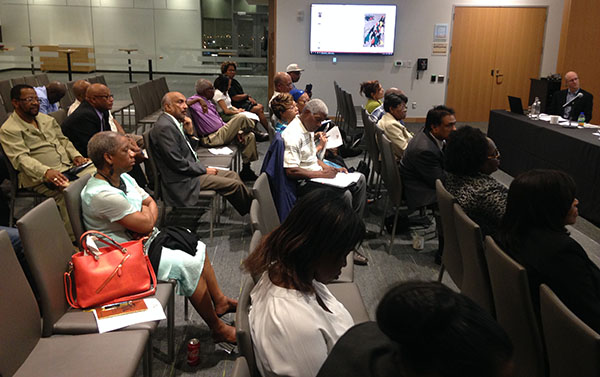 Another section of the audience. Photo by Robert Bazil.

It was heartening to learn, from Brotherson, that a Youth Diaspora Tourism Desk is being established, to deal, specifically, with the youth of the Diaspora.

Natiello presented a brief report on the IOM’s relationship with Guyana, and advised that the IOM is a United Nations organization, consisting of 160 member states, and it oversees effective and sustainable Diaspora Engagement for development in the Caribbean, via the IOM’s Sustainable Diaspora Development Fund.

He explained that Mantver, who is an expert on Diaspora matters, is employed by the Centre for International Migration and Integration (CIMI) in Israel, and was hired by the IOM to head a regional project, which includes Guyana, Belize, Suriname and Jamaica.

Mantver explained that since $500 to $600 billion a year is transferred from various Diaspora to their homeland, Diaspora Engagement has become a major subject in the world arena.

He explained that the word “Diaspora” was coined by the Jews when they were scattered from their homeland, but today, the word is more widely used to describe communities, formed by people living outside their homeland.

He referenced Diaspora capital, which he described as money, knowledge, network connections, skills and abilities and harnessing them is public diplomacy.

He provided an extensive presentation, applicable to the importance of the consultations for the Diaspora Engagement Strategy, and gave examples of Israel’s and India’s strategy, and how these countries are benefitting from them.

After all the presentations were delivered, time was allotted for questions and answers. Participants were indeed very passionate about the questions asked and responses given. However, it was clear, that from the questions asked, or rather, statements provided by the participants, it is pertinent to suggest that the full objective of the consultation for input into this strategy was not effectively achieved. 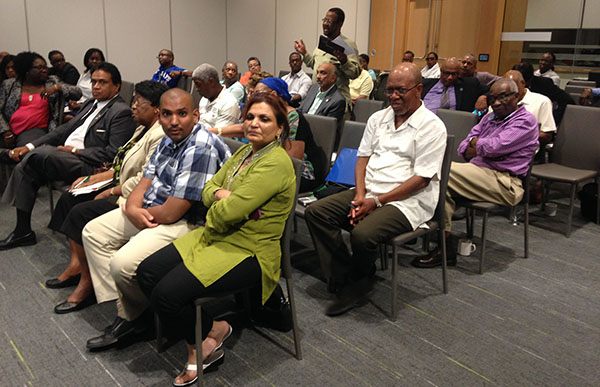 A member of the audience passionately poses a question to the panel. Photo by Robert Bazil.

In response, Brotherson agreed that communication is of vital importance to this entire process, and he personally committed to ensuring that all correspondence to the Diaspora Unit would be fully addressed.

He assured the Diaspora that measures, such as the increase of capacity in the foreign offices and staff in his unit; the creation of a website; as well as mapping, would provide for a more effective discharge of Diaspora matters.