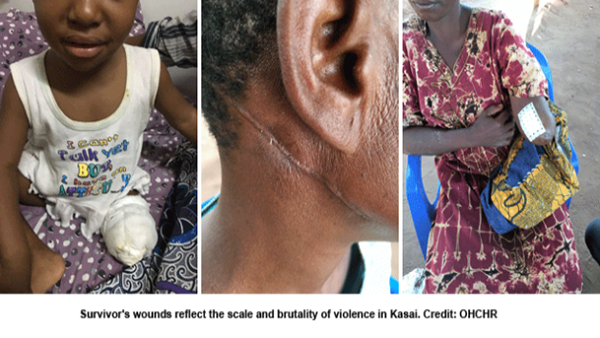 UNITED NATIONS, New York, November 14, 2017 (IPS) — The Democratic Republic of the Congo (DRC) is on the brink of a humanitarian crisis and the international community must step in before it worsens, humanitarian agencies warn.

The escalation of ethnic clashes in southeastern DRC, in recent months, has left millions displaced and on the verge of starvation.

In the past year alone, the conflict has displaced nearly 2 million citizens, 850,000 of whom are children and some of whom have fled to the neighboring nations of Angola and Zambia. DRC already had the highest number of new displacements in the world in 2016.

“The UN system-wide L3 response is only activated for the world’s most complex and challenging emergencies, when the entire aid system needs to scale up and respond to colossal needs.”

According to the World Food Program (WFP), over 3 million people in the Kasai region are severely food-insecure, exacerbating hunger and malnutrition.

“As many as 250,000 children could starve in Kasai in the next few months unless enough nutritious food reaches them, quickly,” said WFP Executive Director, David Beasley, after a four-day mission to the central African country.

NRC said that over 80 percent of people in displacement camps in Tanganyika province did not have access to clean drinking water, heightening the risk of cholera outbreaks.

Though WFP and NRC are both scaling up assistance, aid agencies are constrained by challenges in funds and access.

The UN’s humanitarian response appeal for DRC is only 33 percent funded, the lowest level of funding for the country in more than 10 years, while WFP has received only one percent of the 135 million dollars needed for the next eight months.

Though some families have been able to return to their villages in Kasai, Beasley noted that many could not work on their fields for fear of being attacked again.

“I have met too many women and children whose lives have been reduced to a desperate struggle for survival…that’s heartbreaking, and it’s unacceptable,” he said.

Blom expressed hope that a level three emergency classification will bring in more funds, and highlighted the importance of having such resources — and being flexible.

For instance, North Kivu, which hosts the largest number of displaced people in the country, is not included within the UN’s emergency classification. Blom said that though North Kivu is not experiencing the same level of violence, as seen in Kasai, the conflict’s unpredictable nature could change this.

“Resources coming into the country must be flexible so we can put them to use where needs and gaps arise. Lives depend on it,” she warned.

DRC’s long-standing conflict has left over 8 million people in need of assistance and protection. The most recent iteration of the crisis has partly been fueled by the refusal of President Joseph Kabila to step down after his mandate expired in December 2016

Beasley said he saw the horror in survivors’ eyes as they told stories of beheadings and sexual violence.

“The Kasai region, it was rather appalling in ways that are truly hard to explain, in ways you actually don’t want to explain.”

According to a mission report by the Office of the High Commissioner for Human Rights (OHCHR), security forces and militias “actively fomented, fueled, and occasionally led, attacks on the basis of ethnicity”.

Witnesses told OCHR that two pregnant women’s foetuses were removed and allegedly chopped into pieces, while another two women were accused of being witches and were beheaded.

Among the survivors was a woman who was raped with a rifle barrel, four hours after giving birth.

“I did not end up like the others because I lied on the ground (and) pretended to be dead…and I hid my baby under my body,” she told OHCHR.

Her newborn baby was reportedly shot twice in the head.