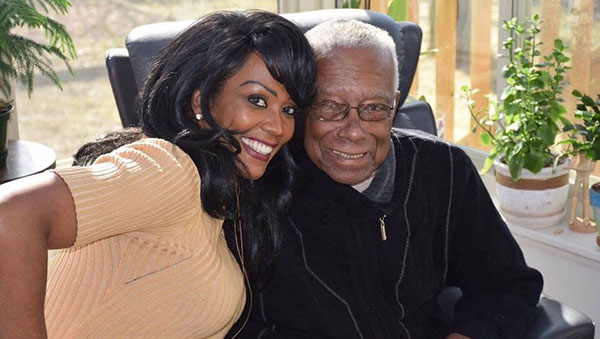 The late Dr. McCurdy, role model and mentor to many, seen with Gwyneth Chapman, who describes him as her "Canadian Father Figure", and who visited him at his home in Windsor, just a few months before he passed away. Photo contributed.

TORONTO, Ontario March 1, 2018 — The Late Dr. Howard McCurdy, scientist, community advocate, inspirer, role model and leader and renowned politician, was admired, liked immensely and respected by many, inside and out of the African Canadian community.

Last week Tuesday, February 20, the former New Democratic Party (NDP) Member of Parliament for Windsor, Ontario, and first Black MP for the party died from cancer, at the age of 85.

He will be sorely missed!

Below is the fond remembrances of two individuals — Gwyneth Chapman and Irene Moore Davis — who admired and respected him, immensely.

Next to my biological father, Dr. Howard McCurdy was my second dad and mentor, since I was 16 years of age. I’ve always referred him as my Canadian Father Figure.

He was a lot like my father, who lived in St. Lucia, and I was drawn to him because he embodied similar traits that I admired in my father and what I aspired so much to be.

Howard was courageous, brilliant, passionate about people and fairness, equality and justice. He was outspoken, eloquent and cared very much about the development and upliftment of people in general.

He recognised my abilities and, next to my father, he was the most encouraging and support mentor I ever had. He had utmost confidence in me and, I believe, saw a bit of himself in me as well.

He was a constant source of inspiration and someone who I ran to for advice and direction in matters concerning the community. We admired and were inspired by each other.

Howard was a tremendous source of strength and his courage inspired me to be unapologetic in my actions to speak up, stand up and make a difference. It’s incredible how my two greatest pillars of strength have passed in a matter of a year from each other.

The way I see it, the examples that they’ve shown, the legacy that they have left behind, gives us a lead and high pillar that we can now stand and be excellent in the work that lies ahead.

Howard was indeed one of our very own Canadian Icons, humble as ever, full of hope, and courageous like no one I’ve known. He’s left a huge void that cannot be filled and I am forever grateful for his belief and support that he has given me throughout my lifetime.

Gwyneth Chapman is a youth political empowerment specialist and African Canadian Community Organiser. She is a Special Advisor for Youth Engagement and Development to Toronto Mayor, John Tory and the founder and President of the Canadian Black Caucus and Inspiring and Empowering Youth.

Dr. Howard McCurdy — A Perspective From A Resident Of Windsor, Ontario

It was impossible to grow up as an African Canadian in Windsor in the 1980s and 90s without being aware of Dr. Howard McCurdy. As a result of his educational and professional accomplishments, his political success and his activism, he was well respected in our community.

When I was in my third year at the University of Windsor, he was the keynote speaker at a dinner, jointly hosted by a few of our Black student organizations, and I still remember the advice he gave to all of us that night, about 25 years ago.

In essence, he was talking about the inescapable network of mutuality, but he did so in terminology that young people could understand. He told us that we should strive for success, but not empty success: he admonished us that having a fine home and a three-car garage would mean nothing if we had left our brothers and sisters behind.

After my university years, I had an opportunity to serve on a committee with Dr. McCurdy for the first time, when we were members of the Underground Railroad Monument Committee of Windsor, from 1999 through 2001 (which my late mother chaired).

I also served as Secretary of the Windsor and District Black Coalition — which he had founded fifty years earlier — when he returned to its presidency, from 2000 through 2005.

I had many opportunities to observe him and to learn from his example… particularly the ways in which he pushed the Windsor Police Services to adopt three-digit badge numbers; implement anti-racism training for all police officers, administrators, and staff; and transform the process whereby community members filed complaints about harassment or the use of force.

I was honoured to be present on those occasions when Dr. McCurdy would bring just a small group of us to meet with elected officials and discuss the issues that were facing people of African descent, and the real life lessons I learned in his presence have far greater applications in my daily life, today, than most of the things I learned in classrooms and lecture halls.

Dr. McCurdy both knew and cared a great deal about the history of African Canadians in our region, including but not limited to, the extraordinary contributions of his own ancestors.

He was a charter member of the Essex County Black Historical Research Society, which was founded in 2001, and his political and community activism were well grounded in his extensive knowledge of so many successful and unsuccessful movements and initiatives, through which African Canadians had sought justice previously.

He cared deeply about the next generation of leaders and did not hesitate to offer us mentorship and guidance, often flavoured with a spicy combination of pointed critique and wry humour. But above all, he loved and was proud of his family and the African Canadian community, both past and present.

Irene Moore Davis, Manager of Continuing Education at the St. Clair College, is President of the Essex County Black Historical Research Society. She is former Secretary, Windsor and District Black Coalition; former Secretary, Underground Railroad Monument Committee of Windsor; and author of A Fluid Frontier: Slavery, Resistance, and the Underground Railroad in the Detroit River Borderlands (2016) and The Long Road Continues: A History of People of African Descent in the Place Now Known as Windsor that will be released in October of this year.

The family would appreciate donations made to the Kidney Foundation — Windsor & District Chapter or the Windsor & Essex County Cancer Centre Foundation.