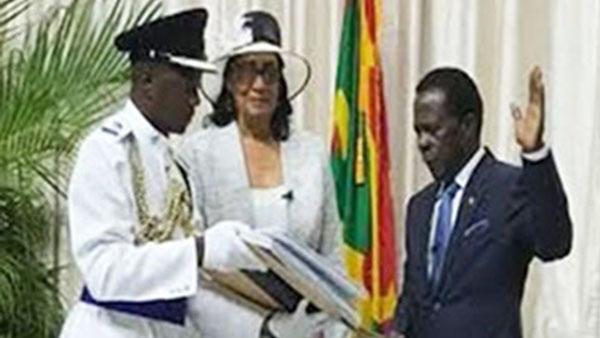 Dr. Keith Mitchell Sworn In As Prime Minister Of Grenada For Fifth Time

Mitchell, 71, as he had done following the victory on Tuesday, reiterated a call for the main opposition National Democratic Congress (NDC) to join with the rest of the social partners, in putting forward the best policies for the future socio-economic development of the tri-island state.

“I am humbled by this, your confidence in me and the team you have chosen, but that is just the elected team, the real team is all of us,” Mitchell said after being sworn into office by Governor General, Dame Cecile La Grenade, at the ceremony, held at the Grenada Trade Center, south of here.

He said his first task would be to write an official letter, inviting the NDC, which failed to win a seat in the Parliament for the second consecutive time, officially requesting their participation “in the interest of national building”.

“We don’t have to fight each other, every day of the year…this electoral war is over, let peace reign,” Mitchell said, acknowledging that in a democracy, people are entitled to support whichever party or group they want to.

He said while the NNP had won all the seats and there’s a feeling that the “winner takes all, this winner does not take all,” adding that his administration is determined “to let the voices be heard in a profound way”.

Mitchell added it was regrettable that the constitutional referendum in 2016, which would have allowed for, among other things, the country to join the Trinidad-based Caribbean Court of Justice (CCJ) as its final court and the appointment of a Leader of the Opposition in the Parliament at all times, had been rejected by the population.

He said the results of the elections on Tuesday mean “it is now left in the hands of the Governor General to have some semblance of opposition in the Parliament”.

But he told the audience that the victory would be meaningless, if after five years, Grenada could not “lift more people out of poverty, could not send more people back to work…empower our families and make all Grenadians proud”.

“We can’t build this nation is we leave out our marginalised people who did not share our view,” he said, telling the audience “I want you to stick us to that”, as it relates to his most ardent wish that is to build a nation together.

Mitchell, the longest-serving prime minister within the 15-member Caribbean Community (CARICOM) grouping, reminded the audience that the real power lies not in the hands of the elected representatives, but those who stood in line to cast ballots on Tuesday.

He said it is this power that “must keep us humble”, adding “it is now our time to fight for them”.

He called for a “total commitment from all of us….to do all we can to make the lives of those ordinary people better”, adding that he would do is “utmost” to lead the country into prosperity.

Mitchell did not name, nor did he give any hint, as to who would form the new Cabinet.