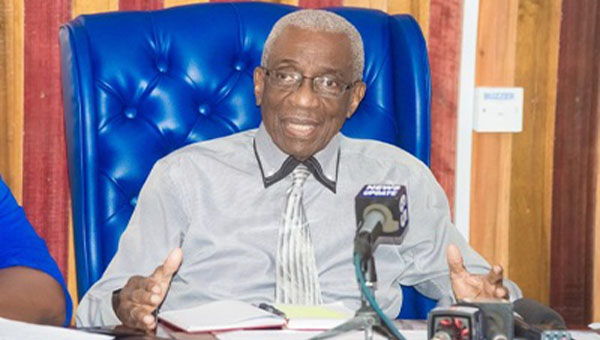 Guyana Elections Commission Chairman, James Patterson, recommends, in a letter to President David Granger, that elections cannot be held, until a house-to-house registration is completed, and not before "late November".

GEORGETOWN, Guyana, March 20, 2019 (CMC) – Chairman of the Guyana Elections Commission (GECOM), retired Justice James Patterson, on Tuesday, said that fresh regional and general elections could only be held in Guyana in November.

In a letter to President, David Granger, the GECOM chairman wrote that “I would proffer that the Commission would be in a position to conduct General and Regional Elections, no earlier than late November, with an Official List of Electors having a qualifying date of 31st October 2019.”

President Granger has said, recently, that he could not announce a date for credible elections, until he receives the assurances from GECOM, even though the main opposition People’s Progressive Party (PPP) has said the polls must be held, no later than March 21, in keeping with the Guyana Constitution, following the successful motion of no confidence that brought about the downfall of the coalition government on December 21, last year.

Under the Guyana Constitution, elections must be held, no later than 90 days after a successful motion of no confidence against the government, or that the period could be extended by a special majority in the National Assembly.

Opposition Leader, Bharrat Jagdeo, has, in the past, accused GECOM of playing to the tune of the coalition government, and has noted that the PPP would regard the government as being illegal, after March 21.

In his letter, Patterson apologised for his late response to Granger’s earlier letter, stating that consultations with his chief elections officer and senior staff “were a necessary prerequisite” to the contents of the letter.

He wrote that, as of February 5, this year, “the Commission was intimately aware that it was impossible to conduct elections within the three months” timeframe, commencing 21 st December 2018”, and that it is also impossible to do so, on any date prior to, and including, 30th April 2019”.

Patterson said that this position had been communicated to Granger, in a letter dated February 21, and since then the process has “been continuously frustrated by the withdrawal of some Commissioners from our official meetings”.

“This has occurred at every session, convened since 28th February 2019, including the Commission’s last meeting, on March 14, 2019, he added.”

Patterson also indicated that funds were needed for GECOM to hold credible elections, saying that he has been advised by the “Chief Elections Officer, that given all our current considerations, an amount of three and a half billion Guyana dollars is required”.

“Kindly note that significant critical-path activities, associated with elections, cannot commence, prior to the availability of these funds to the Commission. In the circumstances, no election date should be contemplated, less than five months after these funds are placed at the disposal of, and the control of, GECOM,” Chair Patterson suggested.

Patterson also made reference to the electoral list, noting that he has been informed, by the Chief Elections Officer and the Commissioner of Registration, that “given the current time and operational status, it would be a logistically-impossibility for the Commission’s Secretariat to produce a list, with a qualifying date of 30th April 2019, which could be available for 1st May, 2019”.

“Accordingly, the Secretariat’s submission to the Commission, all viable options for the availability of an electoral list, are anchored in a qualifying date of 31st October 2019, which lists cannot be used before 1st November 2019,” he further wrote.

He said that among the Secretariat’s submission “was the proposal to have elections after the completion of a New National Register of Registrants (NRR), based on the conduct of a House-to-House registration exercise”.

Patterson wrote, in that proposal, the contemplated finish date was February 2020. But he said that “with a significant increase in the allocated resources for that exercise and an adjustment in the management arrangements for some procurement activities, the execution of the programme could be restructured to be completed at least two months earlier, in 2019”.

“Should this be achieved, most of the Commission’s concern for credibility and timeliness would be addressed. I would therefore urge you to support this, by providing the required additional resources and appropriate guidance to those agencies and authorities, whose co-operation is required, if our objectives are to be achieved,” Patterson wrote.