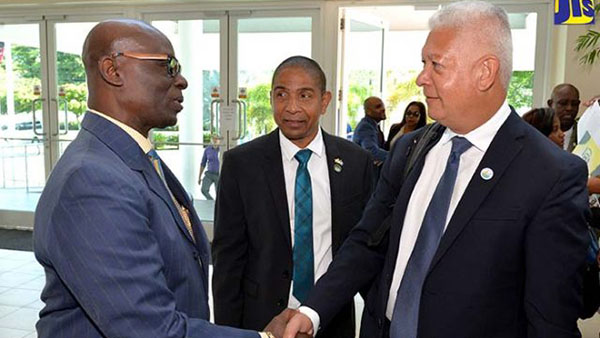 Minister of Local Government and Community Development, Desmond McKenzie (left), greets His Worship the Mayor of Port-of-Spain, Trinidad and Tobago, Alderman Joel Martinez (right), at the inaugural staging of the Caribbean Conference of Mayors at the University of the West Indies (UWI) Regional Headquarters, Mona, St. Andrew, yesterday (April 9). At centre is His Worship the Mayor of Kingston, Senator Councillor, Delroy Williams. The three-day meeting is organised by the Kingston and St. Andrew Municipal Corporation and is being held under the theme ‘Caribbean Cities: Honouring the Past, Embracing a Smart Future’. Photo credit: Dave Reid/JIS.

Addressing the inaugural Caribbean Conference of Mayors, which ends here on Wednesday, McKenzie said, “If we speak about the independence of local government, then we should create our own niche of revenue, and it’s time we extricate ourselves from the pockets of central government, by becoming more relevant when it comes to generating our own sources of revenue.”

He told the delegates attending the conference, which is being held under the theme ‘Caribbean Cities: Honouring the Past, Embracing a Smart Future’, that the potential is there for this to become a reality, noting that “this is one area of disappointment in local government”.

“As our collective economy and societies evolve, we should pool our intellectual and social capacities to drive and support development in our cities, municipalities and countries,” he said.

He observed, the conference provides an opportunity for local government practitioners to share best practices and significantly improve the quality of service provided to citizens, particularly in starting the process of coordinating the creation of smart cities across the Caribbean.

“The starting point of this process is the sharing of ideas – communication and information technologies – to increase efficiency and creativity of our operations. In this way, we will positively affect service delivery and governance in our cities and municipalities, and, at the same time, we will more strongly contribute to the share of the limited budget resources that are available to the local authorities,” he said.

The organisers said that the conference is geared towards building relationships and understanding among mayors and local government practitioners, from across the Caribbean.

The Caribbean Conference of Mayors, organised by the Kingston and St. Andrew Municipal Corporation. forms part of the activities marking Kingston’s 145th anniversary as capital of Jamaica.