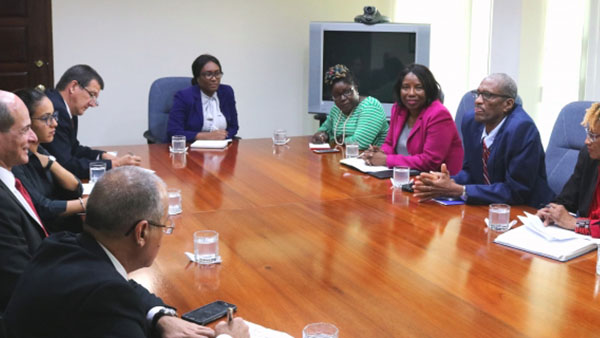 Dr. Douglas Slater (second from right) CARICOM’s Assistant Secretary General, Human and Social Development, and team meeting with Rogelio Sierra Diaz (second from left), Vice-Minister of Cuba, and his team at the CARICOM Secretariat in Guyana.

GEORGETOWN, Guyana, June 14, 2018 (CMC) – The Caribbean Community (CARICOM) and the government of Cuba have both pledged to continue to strengthen relations, in matters related to trade and the arts.

This was the outcome of talks between CARICOM’s Assistant Secretary General, Human and Social Development,  Dr. Douglas Slater, and Cuba’s Vice Minister, Rogelio Sierra Diaz, when they met at the CARICOM Secretariat, yesterday.

The issues related to a disabilities project, the extension of Art programs at the Edna Manley College of the Visual and Performing Arts in Jamaica, and trade.

In the discussions on the disabilities project, Slater, who spoke on behalf of CARICOM Secretary General, Irwin LaRocque, noted that a tri-lateral Memorandum of Understanding (MOU), among the government of Guyana, the government of Cuba and CARICOM had already been signed.

He explained that there was a decision to implement the project in phases, and outlined that a centre has been constructed, by the government of Guyana, and a team from Cuba is already in Guyana, working on the project.

He said when the initial phase was completed in Guyana and there was a clear way forward, the project would be extended to the other CARICOM Member States.

In response, Diaz said firm steps had been taken and there was a lot to be thankful for. He added, it was now important to acquire the equipment needed.

In relation to the phase of the project that would extend it to the other CARICOM Member States, he said that the CARICOM Secretary General and staff would play a key role in achieving the goals of that phase.

Both parties agreed that there were still some details that needed to be refined between CARICOM and Guyana.

The Cuban Vice-Minister also gave the assurance that Cuba would provide support, knowledge and training, but emphasized that the project belonged to CARICOM.

Turning to the matter of the extension of programs in the School of Art at the Edna Manley School in Jamaica, the Cuban ambassador said the government of Jamaica had been contacted, and the areas, in which Cuba could provide assistance, were identified. He explained that it was being proposed that there might be some additional infrastructural requirements for the project to move forward, and various options to address this challenge were being explored.

Slater expressed an interest in further engagement on the matter, and also gave an assurance that the CARICOM Secretariat would engage with the Edna Manley School, to explore the available options.

Assistant Secretary-General, Trade and Economic Integration, Joseph Cox, who was also present, spoke about a trade and economic partnership agreement that had been regionally applied in 12 Member States, and highlighted that Haiti had now expressed an interest in joining the agreement.

In relation to a Joint Commission, in which the second protocol was signed in November 2017, he advised that Member States needed to accelerate their efforts to satisfy the legal requirements to be party to the Commission.

Under the agreement, more than 300 Caribbean products would have fees removed for export to Cuba.

The Cuban Vice-Minister said he understood that there were legal protocols that would have to be addressed, but implored CARICOM not to allow them to create further delays.

The goal of the protocol is to improve trade relations between CARICOM and Cuba.