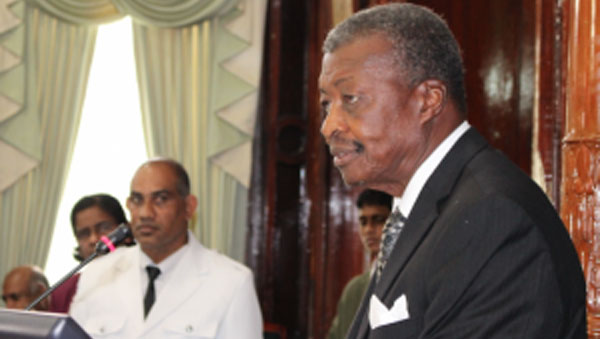 GEORGETOWN, Guyana, January 3, 2018 (CMC) – Speaker of the National Assembly, Dr. Barton Scotland, has ruled that the controversy over the validity of the recently-passed no-confidence motion should be settled by the court.

During today’s sitting, that was boycott by members of the main opposition People’s Progressive Party (PPP), Scotland decided not to consider the resolution of the no-confidence motion , instead saying that the Assembly will be guided by the Court’s ruling.

In response to a request from the government, seeking a reversal of the resolution of the no-confidence motion, Scotland said he received advice, both solicited and unsolicited, from various jurisdictions on the issue.

He explained that while he has the power to reverse the no-confidence resolution, he believes that issues, related to its passage, might be addressed better outside the Assembly, referring to the Courts.

His decision is likely to see both the government and the opposition approaching the Courts for a final ruling, on whether the no-confidence motion was properly passed.

The government’s position is that the motion was not properly passed, since it believes a majority of 34 seats were needed for a majority passage, however, the opposition contends that 33 votes represented the majority.

Both sides have said they intend to move to the Court.

But the opposition had already indicated that it wants the Courts to force the government to accept the vote and call elections within three months.

The government has already hired the services of senior counsel, Rex McKay, and Stephen Fraser, along with a number of other high-powered attorneys to address the issue.

Last month, Opposition leader, Bharrat Jagdeo, successfully tabled the motion of no confidence in the government, after accusing it of being “incompetent and corrupt”.

The motion received the backing of government back-bencher, Charandass Persaud, securing the 33 votes required to pass the motion in the 65-seat National Assembly, after several hours of debate. Despite repeated urges by fellow coalition parliamentarians to change his vote, Persaud declined.

The coalition A Partnership for National Unity (APNU)/Alliance For Change (AFC) won the 2015 general election by a slender one-seat majority.

Jagdeo said the government has been a total failure and has not been keeping its promises to the Guyanese people, who voted them into office.