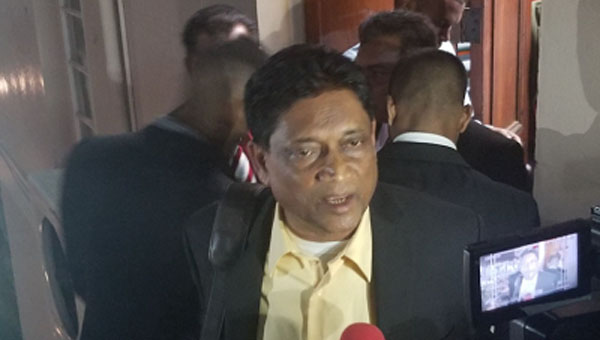 Former AFC Parliamentarian, Charandaas Persaud, an attorney, cast the deciding vote in an opposition no confidence motion that toppled the APNU+AFC coalition government. Yesterday he was named as a respondent in a government Supreme Court application, seeking to invalidate the motion.

GEORGETOWN, Guyana, January 5, 2018 (CMC) – Yesterday, Senior Counsel Rex McKay and a team of high-powered lawyers — on behalf of the coalition government — filed an application in the Supreme Court, seeking to invalidate the results of the recent no-confidence motion that brought down the David Granger administration.

The application singled out the dual citizenship of former government legislator, Charrandass Persaud, who voted in favour of the motion that was passed by a 33-32 margin in the 65-member Parliament.

The PPP contends that the Guyana Constitution provides for the preservation of all acts by parliamentarians, although he or she might have been ineligible to sit in the National Assembly.

The High Court matter has been filed on behalf of New Amsterdam farmer, Compton Herbert Reid, and lists the Speaker of the National Assembly, Dr. Barton Scotland, Persaud and the Attorney General, Basil Williams, as the respondents.

Reid is also asking the High Court to declare that Persaud was not qualified for election as a Member of the National Assembly, by virtue of his own act and acknowledgement of allegiance, obedience and adherence to a foreign power, being the Sovereign State of Canada, in contravention of Article 155 (1) of the Constitution of Guyana.

Additionally, the Court is being asked to declare that Persaud was disqualified on April 7, 2015 from being nominated as a member of the national assembly, and that his nomination as a candidate on the list of the coalition — A Partnership for National Unity (APNU) and the Alliance for Change (AFC) — is invalid, null and void and of no legal effect.

But the PPP, which said it would also join the proceedings, is urging other interested parties to do likewise.

No date has been fixed yet for the commencement of the hearing, but the opposition party has dismissed the government’s move as “frivolous”.

“We urge the Judiciary not to be complicit in any conspiracy to undermine and flout the Constitution and make a mockery of our democracy. We expect that this matter would be heard on a day-to-day basis and that the Judiciary would not contribute to the government’s violation of the Constitution,” the opposition party added.