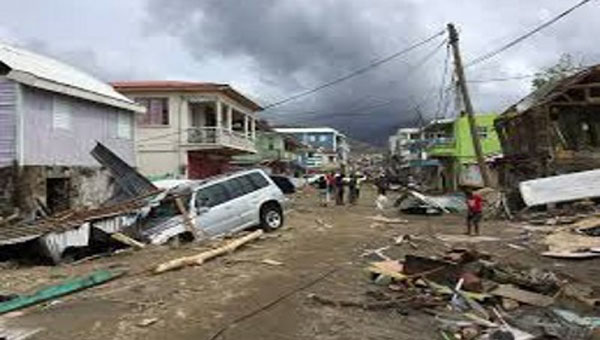 A scene of hurricane damage in Dominica in 2017. Photo credit: CMC.

BRIDGETOWN, Barbados, March 20, 2019 (CMC) – The economic outlook for Dominica, this year, is favourable and growth is being projected at two percent, according to the Barbados-based Caribbean Development Bank (CDB).

In its “Country Economic Review 2018-Dominica”, released, here, ahead of the bank’s annual Board of Governors meeting, to be held in Trinidad and Tobago in June, the region’s premier financial institution noted that the positive economic performance, is based on an expected pickup in the island’s reconstruction and rehabilitation efforts.

It said several projects in the planning stages, since late 2017, are expected to come on stream in 2019, and that private sector activity will be a major contributor to construction, as individuals repair and rebuild their homes, and hotel construction of Jungle Bay and Range Developments continue.

Growth in agriculture is conditional on favourable weather and the success of replanting efforts.

The Climate Resilience Execution Agency for Dominica (CREAD), established in 2018, is expected to result in greater rationalisation of scarce human and material resources, and improve the rate of project implementation.

The CDB notes that low human resource capacity is a perennial risk to project implementation in Dominica.

It said that the decline in the Citizenship by Investment Programme (CBI) flows and continuing uncertainty about international financial assistance, also present considerable risks to the growth forecast.

“The loss of RUSM (Ross University School of Medicine) directly impaired the private education sector and negatively impacted the ancillary business services and real estate sectors in Portsmouth. At the same time, potentially-transformative investments, in geothermal energy and other economic and climate resilience projects, provide some grounds for optimism,” the CDB added.

It said building economic, social and climate resilience are critical, and the government has recognised the need to make investments that build-in resilience to natural hazards and climate change, more broadly.

According to the CDB, economic growth in Dominica was positive in 2018, exceeding expectations: “Overall, growth was 0.5 percent. Post-Hurricane Maria-related construction led the way, and this will likely continue into 2019. Value added in the wholesale and retail sector also increased significantly.”

The CDB said that output from all of the other main sectors declined. Central government operations resulted in an overall deficit, notwithstanding a reduction in total public debt.

“Fiscal conditions remain uncertain, as some pledges of international financial assistance, following the recent weather events, remain unfulfilled. On the external side, the current account balance deteriorated over the period, largely due to a ballooning trade deficit. Vulnerabilities in the financial sector, particularly the non-bank financial sector, persist,” the CDB stated.

The CDB said that the government’s primary focus is on building climate and economic resilience.

“This is necessary to reduce the volatility of the country’s economic growth trajectory. Dominica consistently ranks among the most vulnerable countries in the world, because of its high susceptibility to natural hazards,” the bank said, noting that the commitment of the government to “Build Back Better” and develop strategies to encourage resilient infrastructure, must be sustained.

The CDB said economic activity in the aftermath of Hurricane Maria remained subdued, but shows signs of recovery.

“The passage of the hurricane in 2017 had devastating effects on the Dominica economy, resulting in a gross domestic product (GDP) contraction of 9.5 percent. Output began to recover in the second half of 2018, placing GDP marginally (0.5%) above its 2017 level.”

Construction activity was the main contributor, growing by 33 percent, while the wholesale and retail sector increased by 15 percent.

The traditional lead sectors recorded declines in output. Total visitor arrivals, up to September last year, stood at 74,243, down by 68 percent relative to the same period in 2017.

Dominica suffered the departure of RUSM, a major contributor to economic activity and the bank said value added, generated by private education, declined by 85 percent.

The Barbados-based bank said that the government’s fiscal operations resulted in an overall deficit of US$140.2 million, by the end of September 2018, up considerably from a deficit of US$18 million in the corresponding period of 2017.

The increase in the deficit is mostly explained by a rise in capital spending, related to post˗hurricane reconstruction and rehabilitation efforts. Capital expenditure increased by 40.8 percent in the first three quarters of 2018, relative to the same period in 2017.

Public works included rehabilitation of the Douglas Charles Airport, construction of the West Bridge in Roseau, house building, and dredging of rivers.

Total revenues declined by 6.5 percent during the period under review, driven largely by a 25 percent reduction in CBI receipts. Tax revenues actually increased by 4.6 percent, showing improvement in all main subcategories, except tax receipts on income and profits.

The CDB said that the public sector debt fell in 2018.

Total disbursed outstanding debt stood at one billion US dollars at the end of October 2018. As a percentage of GDP, debt fell from 78.4 percent to an estimated 73.3 percent. And the CDB said this was attributable to declines in debt, owed by both central government and public corporations.

“Domestic credit increased by 40.8 percent, year˗on˗year, at the end of the third quarter of 2018. This was mainly due to a 56.9 percent decrease in the net deposit position of government, as it drew down on deposits.”

The CDB said credit to the private sector increased by 0.6 percent, reflecting the offsetting effects of a 4.4 percent reduction in credit to households, and a 9.4 percent increase to businesses.