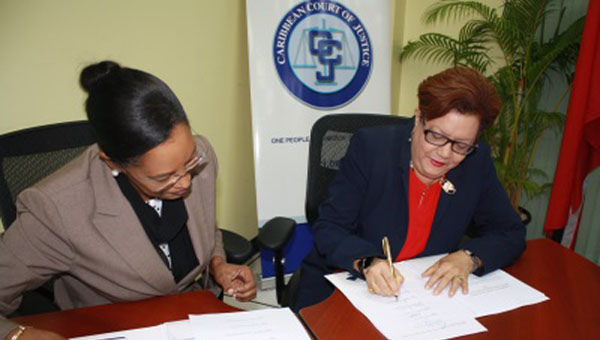 PORT OF SPAIN, Trinidad and Tobago, April 16, 2019 (CMC) – The Caribbean Court of Justice (CCJ) is celebrating its 14th anniversary, today, with its President, Justice Adrian Saunders, saying that the Trinidad and Tobago-based regional court has much to be proud of.

“In 2018, we delivered our highest number of judgments, in a year, in the Appellate Jurisdiction, 34 in total, and we tried seven cases, filed in the Original Jurisdiction, where we generally had two each year.  The increased use of the CCJ seems to reflect growing confidence in the Court and a recognition that we play an important role in the Caribbean,” Justice Saunders said.

The Court was inaugurated at Queen’s Hall in Port of Spain, on April 16, 2005 to replace the London-based Privy Council, and Justice Saunders said that the Court has launched a strategic plan, which will direct activities over the next five years.

“One of the strategic issues identified, when we were gathering data to inform the plan, was the need for increased communication. With CCJ Week, we are beginning to provide our stakeholders with increased information, while we continue to produce excellent work in our judicial area,” President Saunders noted.

The anniversary is being observed with a week of activities and, earlier today, the CCJ launched its 2019 Rules of Court for the Original and Appellate Jurisdictions.

The Rules of the Court are reviewed, every two years, and the revisions help to further reduce delay, ensure greater clarity and support advances in court administration,” the CCJ said, in a statement.

It said it would also reveal a new design for its website, www.ccj.org, during the week, noting that the new design will reflect a modern aesthetic and features, and will also include an enhanced search for judgments and a new Court calendar on the homepage.

At the start of the weeklong activities, Justice Saunders again appealed to Caribbean countries to join the CCJ, which also serves as an international tribunal, interpreting the Revised Treaty of Chaguaramas that governs the regional integration movement.

While most of the CARICOM countries are signatories to the Original Jurisdiction of the Court, only Barbados, Guyana, Dominica, Barbados and Belize have signed on to the Appellate Jurisdiction.

The CCJ said that it will hold an open day tomorrow.