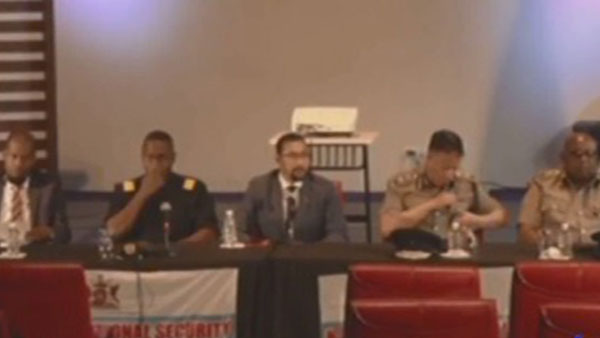 “This was really an opportunity for us to listen to various stakeholders, who have contributions to make. We have made very careful note of all of the recommendations made, (and) what can be implemented, will be implemented.

“I want to continue that sort of dialogue with some of the stakeholders, going forward,” Young told a news conference, flanked by Police Commissioner, Gary Griffith; the Chief of Defence Staff, Air Commodore Darryl Daniel; and Dane Clarke, the acting Commissioner of Prisons.

“I certainly can’t put any timeframe on when you will see X number of results etc, but I can tell you that all, seated at this table, are working 24/7 towards making Trinidad and Tobago a safer place, and we will continue to do so,” Young promised.

Young told reporters that the consultation, which was attended by members of the main private sector bodies, academic an, criminologists, provided for an open discussion on the matter of crime in Trinidad and Tobago, where at least 37 people have been murdered, since the start of the year.

“There were also certain comments, with respect to the reporting of crime and how we should deal with it, and I indicated, at the outset, that I intended to have further consultations with the NGOs in Trinidad and Tobago, as well as the media.

“It is my personal view that everyone has a part to play, and two very important pillars in our society are the media and the NGOs, who provide a various number of support services,” Stuart commented.

He said, during the discussion, “we provided certain information to the audience”, defending the decision to have the matter behind closed doors.

He said such a policy allowed for people “to talk openly and freely…and what we focused on is providing a limited amount of information on what we have been seeing, what is in the public domain with respect to the response in relation to crime.

“We all accept that the approach to crime is a multi-tiered one, a multi-layered one, and that there’s a lot of work to be done with education, our social services, and I know that my colleague ministers in those areas have been doing their own as well…”

Young said that the crime situation “did not arise overnight”, and made reference to a report on the drug trade, here, dating back to the mid-1980s.

He said among the “takeaways”, from the discussion, is a recognition that “there’s a lot more work that can be done, between us and between society, that they recognise that hard work is taking place, some people have a sense of frustration at how do we work at stopping the illegal flow of firearms”.

Young said Commissioner Griffith had indicated that even though he has made his mobile telephone number available to the public, “he has not gotten that intelligence …and so, how do we get people to provide him with the intelligence at that number, that will allow him to go and solve some areas of crime”.

Young said young school students at the discussion drew upon the reference that “young people are being pulled and lured towards crime and criminality, because of how it is being sold in social media, some of the music videos and the attractiveness of crime….

“Hearing young people’s perspective, it was very interesting,” he added.