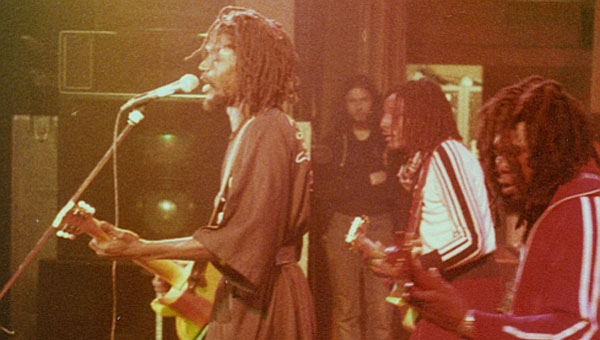 Peter Tosh (singing at microphone) with Al Anderson and Robbie Shakespeare, on the Bush Doctor Tour, in Cardiff, the capital of Wales, in 1978. Photo by Tim Duncan - Own work, CC BY 3.0.

BROOKLYN, New York April 19, 2019 — New York State Senator, Kevin S. Parker, issued a New York state proclamation for reggae icon and Jamaica Order of Merit recipient, Peter Tosh, last Thursday, that celebrates the life and the legacy of the legend, for this year’s renewal of the national observance of 4/20.

Tosh, whose birth name was Winston Hubert McIntosh, and who was also known as ” Stepping Razor”, has been lauded, over the years, for his relentless fight for the decriminalization of marijuana, and his sterling and steadfast efforts for the global promotion of reggae music, as well as his quest for equal rights and justice. 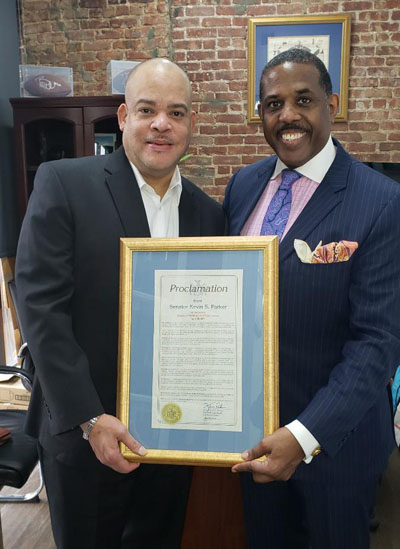 The proclamation came, just ahead of the 4/20 celebrations for 2019, a national observance of respect for the wide variety and multiple uses of cannabis, including recreational, sacramental and medicinal.

Tosh, who was born on October 19, 1944, in Grange Hill in Westmoreland, the westernmost parish of Jamaica, also was a passionate promoter the Rastafari religion.

Murdered during a home invasion on September 11, 1987, at the age of 42, Tosh’s proclamation was received, on his behalf, by Brian Latture, Executive Manager of the Estate of Peter Tosh, at the senator’s office in Brooklyn.

A cadre of state officials, as well as a media contingent, came out, on Thursday, to witness the presentation.

The proclamation read in part: “It is the privilege of this legislative body to honor Peter Tosh, for his exemplary service and humanitarianism, upon the illustrious occasion of the 4/20 Peter Tosh celebration.

“Peter Tosh’s example, as both an artist and an activist, continues to inspire creators and idealists, around the world. He was, and is, a true leader, whose music and message inspires people, on every continent throughout the world.”

As part of the Tosh activities for 4/20, his youngest daughter, Niambe McIntosh, Head of the Estate of Peter Tosh and Board Chair for the Peter Tosh Foundation Ltd., will be attending the National Cannabis Festival, tomorrow, at the RFK Stadium in Washington, DC.

Additionally, a new take on a Tosh classic, “Downpressor Man”, by Tosh 1, featuring vocals by the reggae icon, has already been serviced to radio, as a promotional single.

A number of regional stations, including Irie Jam Radio 93.5 FM in New York, will be part of a celebratory broadcast, tomorrow, that will play portions of the Peter Tosh music catalogue.

And in Vancouver, Canada, close to 100,000 fans are expected to show up for a free concert — headlined by Cypress Hill — at Sunset Beach, where Peter Tosh’s cannabis anthem, ‘Legalize It’, will be sung, at exactly 4:20 pm, around the time when the event is expected to attract a peak audience.