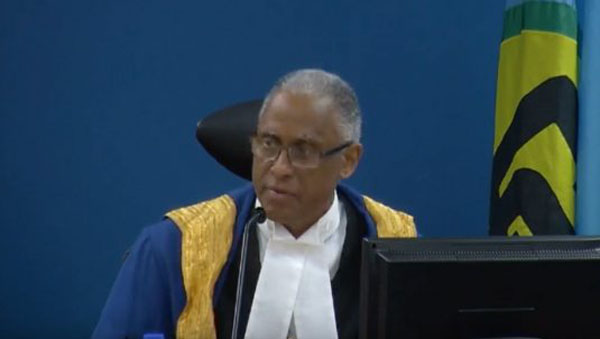 PORT OF SPAIN, Trinidad and Tobago, July 12, 2019 (CMC) – The Caribbean Court of Justice (CCJ), today, ruled that it cannot “establish a date on or by which elections must be held”  in Guyana  following the successful tabling of a motion of no-confidence against the present coalition government of President David Granger, last December.

CCJ President, Justice Adrian Saunders, delivering the consequential declarations of the Court, which is Guyana’s highest, said that the CCJ also could “not lay down timelines and deadlines that in principle are the preserves of political actors, guided by constitutional imperatives”.

Justice Saunders said that the CCJ must assume that “these bodies and personages will exercise their responsibilities with integrity and in keeping with the unambiguous provisions of the Constitution, bearing in mind that the no-confidence motion was validly passed, as long ago as 21st December 2018.”

Under the Guyana Constitution, elections therefore must be held within a 90-day period, following the passage of the motion in the parliament or unless extended by the legislative body, by a vote of two-thirds of the members of the National Assembly.

The Court noted that the filing of the court proceedings in January, challenging the validity of the no-confidence vote, effectively placed matters on pause, but the CCJ reminded, however, that it had rendered its decision on June 18, this year.

In separate judgments on that date, the CCJ had concluded that the chairman of the Guyana Elections Commission (GECOM), retired justice James Patterson, had been invalidly appointed and that the no-confidence motion, which was filed by Opposition Leader, Bharrat Jagdeo, on December 21 last year, was validly passed.

The Court held a hearing on June 24 to determine whether there was consensus on those consequences and the declarations and orders the Court should make. As there was no such consensus, the CCJ had ordered the parties to make written submissions on the issue by July 1.

Justice Saunders said today, it is important, however, for the CCJ to make the point “in mandating that the government should remain in office, notwithstanding its defeat and the resignation of the President and the cabinet, Article 106 envisages than the tenure in office of the Cabinet, including the President, after the government’s defeat, is on a different footing from that which existed prior to the vote of no confidence”.

He said that by convention the government is expected to behave during “this interim period as a caretaker and so restrain the exercise of its legal authority.

“It is this caretaker or interim role that explains the three-month deadline in the first instance that the article lays down, in principle, for the holding of the fresh elections”.

Justice Saunders said that in all the circumstances, the CCJ was declaring that “the provisions of Article 106 (6) and (7) of the Constitution apply to a no confidence motion” and that 33 votes constitute a majority in the 65-member National Assembly”.

He said the CCJ was also declaring that while former government-backbencher, Charandass Persaud, who voted with the opposition on December 21, was ineligible to be elected to the Assembly, by virtue of his citizenship of Canada, but his vote on the motion of no confidence was valid.

“Nothing in the anti-defection regime established in Article 156 (3) of the Constitution renders Mr. Persaud incapable of casting his vote on that motion in the manner in which he did,” the CCJ ruled.

Persaud’s vote was crucial, since it ensured that the coalition government lost the one-seat majority it had enjoyed in the National Assembly.

The CCJ said that it was awarding costs in the matter to Jagdeo and Persaud “to be taxed if not agreed” and that in each case those costs have to be paid by the Attorney General.

Earlier the CCJ also issued its consequential declaration regarding the appointment of the GECOM chairman, urging that as a matter of the greatest public importance, “the President and the Leader of the Opposition should, as soon as possible, embark upon and conclude the process of appointing a new GECOM Chairman”.

The CCJ noted that since the Chairman Patterson had already demitted office, it was unnecessary to issue any orders on this point.

However, Justice Saunders said it was the Court’s view that the appointment process of a new chairman should be embarked upon with “the utmost urgency” in light of the CCJ’s decision in the no-confidence motion cases, which triggered the need for fresh general elections.

On Thursday, government and opposition officials, who met in Guyana, agreed to ask President Granger and Jagdeo to consider a total of 13 nominees for the post of GECOM chairman.

At the end of the latest round of talks, the Director-General of the Minister of State, Joseph Harmon, told reporters “at the end of it, we agreed that at this stage, the plenipotentiaries – that is to say the representatives of the President and the Leader of the Opposition – have gotten to a point where they believe that our two principals should meet”.

The head of the delegation from the main opposition People’s Progressive Party (PPP), Gail Teixeira, said Jagdeo did not need to consider the names that President Granger had proposed “which we assume are not unacceptable to him”.

Teixeira told reporters that the discussions were aborted because they were now log-jammed.

“We felt at this stage it was not possible to go further in the discussions at this level and, therefore, it would be most appropriate that we hand over to the Leader of the Opposition and the President.”