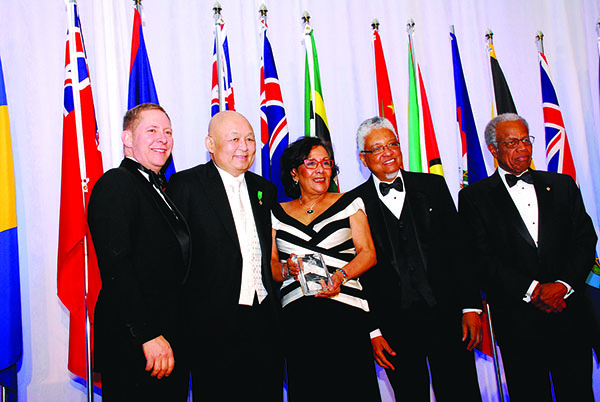 TORONTO, Ontario – Veteran politician, Trinidad-born Dr. Hedy Fry, Member of Parliament for Vancouver Centre was one of three individuals to receive a luminary award from the University of the West Indies at its 5th annual Toronto Benefit Gala.

The award is presented to a person of Caribbean heritage who is an outstanding achiever on an international scale in their respective field or has brought prominence to issues affecting the Caribbean.

Also receiving a luminary award were legendary reggae artiste, Jimmy Cliff, and Tessanne Chin, winner of Season Five of The Voice on NBC, at the gala held on March 29 at the Ritz-Carlton hotel in Toronto.

The event raises funds for scholarships for outstanding academic achievers in the Caribbean, who are in great need of assistance.

G. Raymond Chang, patron of the gala, noted that since its inception, just under 150 scholarships have been awarded and they have raised $500,000.

Dr. Fry was first elected to parliament for Vancouver Centre in 1993 becoming the first rookie to defeat a sitting Prime Minister – Kim Campbell.

“I like to think that it’s because as a family physician I got involved in people’s lives and I do with my constituents. I get involved with the communities. I really believe that if I’m going to go back to Ottawa and represent them, I need to understand them, to know, to listen to them and so I’m always doing this in the riding at events, meeting with people, meeting with groups, etc.”

She says the other reason is she’s a Trini and every year when the big Vancouver Pride parade happens she puts on a costume and dance on the street.

“And people think that this is strange to see an MP, a minister and a doctor doing this. All I say is ‘I’m a Trini’ and I don’t know if a lot of people get what that means. It means we dance in the streets in costume and this is my one opportunity to do it.”

She supports engaging with the community and sometimes even pushing the government on an issue when the government thinks as a minister she should vote for its sake.

When she ran in 1993, she told Prime Minister Jean Chretien that she would draw a line in the sand and that if that line goes beyond the principles she had firmly set out, she is not backing down.

Dr. Fry says she understands compromise but when she hits that line she will vote against the government.

She did that once and thought Chretien was going to call her, withdraw her ministerial position, and put her back in the backbenches.

The justice minister had put in this amendment that Fry didn’t like. He said marriage is between a man and a woman to the exclusion of all others.

Fry went back to community and they wanted her to vote to get it to pass but she just couldn’t do it because she believed it was wrong.

“I believe that the federal government has to treat all of its citizens equally and that was that. So, I got up and walked out when that amendment came. He noticed and the next morning as we walked into caucus, he said to the justice minister, ‘And if I ever have to vote with a bunch of bigots again, I’m not going to do it, okay.’ And that was the end of that, so he agreed with me and he’s always agreed with that position. The state cannot discriminate against its own citizens,” she said. 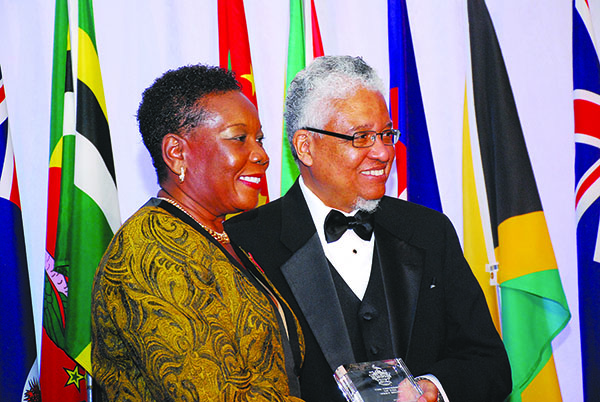 Two other politicians of Caribbean descent were sitting in the House of Commons at about the same time Fry started, Jean Augustine of Grenada and Ovid Jackson of Guyana.

Asked about the paucity of politicians of Caribbean descent in federal politics, Dr. Fry said when she was the minister for multiculturalism, she tried to reach into the Caribbean community because her job was to reach into all communities – ethnic, racial, linguistic, religious.

She says multiculturalism in Canada is one of the things that says all Canadians, regardless of those differences, should be able to participate fully in the economic, social and political life of the country.

If something prevented them from doing so, her job was to find out what those things are and try to help to remove those barriers, or help to give people the skills and tools to overcome those barriers.

“I didn’t meet many people from the Caribbean who wanted to get involved in that. For instance, there is no Canadian Caribbean community. Now, there’s a Canadian black community and a lot of Caribbean women are in it and Caribbean men. But there isn’t really a Caribbean diaspora that gets involved in politics so, for me, that was surprising. The only other group that didn’t get into politics was, of course, the Portuguese and they have not had a political history because the democracy only started relatively in the last 15 to 20 years in Portugal.”

She was successful in getting the Portuguese to participate, with Mario Silva, a Portuguese Canadian becoming a Liberal MP from 2004-2011.

However, she wasn’t able to break into the Caribbean community.

Many women were involved in NGOs for women rights and for other things, and were as far as she knew quite Caribbean as in “pushy and mouthy and getting the thing done” but it always surprised her that the Caribbean community here is very apathetic compared to the kitchen table politics common in the Caribbean.

“I don’t know if its because the country is too big, they feel lost and they prefer to do community-based events, community-based work or municipal work because it feels closer to home, it feels more like the kind of politics they know. I don’t know what the reason is. That would be very interesting if somebody could do a survey on that to find out.”

She said many retirees who were involved in ridings here are now back in Trinidad pushing and helping political change, and building political parties but they didn’t do it here. They were background people here and she has no idea why.

In 2006, she ran for the leadership of the Liberal Party as the first immigrant woman to do so with her “True Grit” campaign.

In 1975, Rosemary Brown, a Jamaican, ran for the leadership of the federal NDP but lost to Ed Broadbent.

She said while she was on The Voice people were telling her about the support that she was garnering from the Jamaican diaspora but it really didn’t hit her until she travelled to some of these countries.

“When I went home, I was just completely floored and blown away by the support and even coming here, I can’t believe the massive amount of support that people have shown me.”

She said when she was on the show she was completely blocked in. “That’s all you eat, live, breathe and sleep and I felt it. I felt this energy, I felt this build and I didn’t know what it was but my husband, sister and dad would come up and say, ‘You dun’ kno’ what going on in Jamaica’ and I just couldn’t believe it. I’m very grateful.”

She said living in England was a culture shock for her but she has grown to love the experience because it taught her hard work, resilience and how to be proud of who she is, no matter what.

England is where she was introduced to all different types of music too, some of her favourite type being rock music.

Chin lives in Jamaica but says she had very special important years in England and she visits because half of her family is there.

She said her band members gave themselves the name, ‘Bread and Butter’ and she intends to take fans on a journey when she holds her first Toronto concert on May 17 at the Sony Centre for the Performing Arts.

“I think I want to take them on the journey that is me. You know, my musical journey, which is a mixture of the songs I did on The Voice but also the songs I was doing long before and who knows, maybe some new stuff so I’m excited.”

Cliff’s acceptance was via a video recording in which he congratulated everyone and sang a line from her famous song, “You Can Get It If You Really Want.”

Legendary calypsonian David Rudder accepted the award on his behalf. 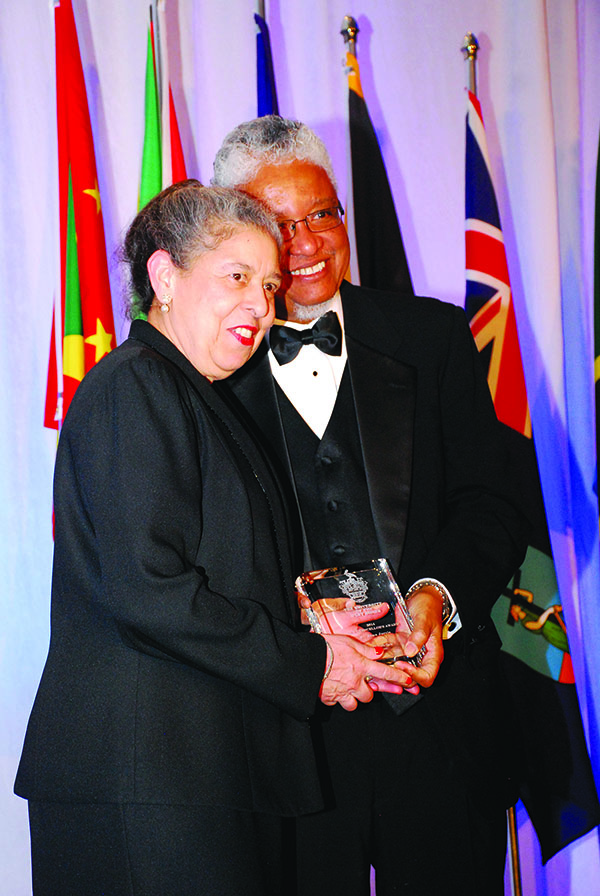 The recipients of the vice chancellor’s award were: The Right Reverend Peter DeCourcy Fenty, Bishop of York Simcoe and the first black bishop in the Anglican Church in Canada, ordained in June 2013; and Dr. Dorothy Anna Jarvis, staff physician, Paediatric Emergency Medicine and University of Toronto professor, Department of Paediatrics.

The chancellor’s award was presented to the Hospital for Sick Children, and Donette Chin-Loy Chang made a special presentation to Elizabeth Buchanan-Hind, executive director, institutional advancement division and chairperson of the gala.

The evening ended with a surprise performance by Chin after Michael Lee Chin bid $10,000 in a live auction for her to sing one song. This was matched by Chang who wanted a second song and Lee Chin then up the ante by bidding another $20,000 for her to perform a third song.

In total, they pledged $40,000 and the winner of The Voice delivered with covers of “Bridge Over Troubled Water” and “Redemption Song,” and her own “Hideaway”.

The master of ceremonies was Michael Anthony Cuffe, Sr.