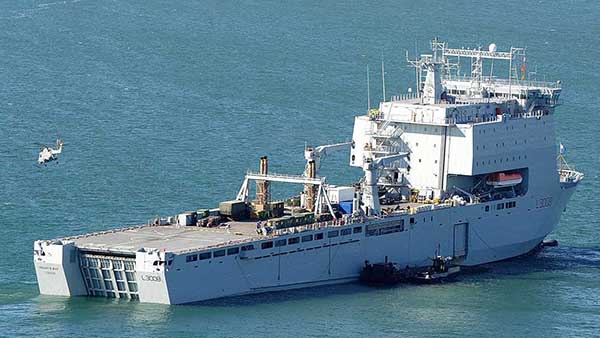 The RFA Mounts Bay is the mobile hub of the British relief effort.

BRIDGETOWN, Barbados, September 13, 2018 (CMC) – The United Kingdom has deployed a team of specialists to the Caribbean, to help mitigate the impact of impending storms, threatening the British Overseas territories.

According to Defence Secretary, Gavin Williamson, 87 engineers, medics, maritime experts and other specialists have joined the regular crew of RFA Mounts Bay, which is the mobile hub of the British relief effort.

He added that approximately 1,000 personnel are deployed, or being held at high-readiness, for if further storms head towards the region.

“I want to assure everyone in our Overseas Territories that our armed forces have been pre-positioned in the region and are absolutely prepared to help. We will be there to support, during this hurricane season, while still helping those, whose lives were devastated by Irma and Maria, to rebuild their lives and homes,” he said.

Last September, several homes were destroyed and infrastructure decimated, when Hurricane Irma and Maria, two of the most powerful hurricanes for decades, hit the region, back-to-back .

As well as being able to carry vital aid and equipment, RFA Mounts Bay will use the Royal Navy Wildcat helicopter, on board, to provide aerial support.

The Humanitarian Assistance and Disaster Relief (HADR) troop, consisting of Royal Engineers from the British Army and Royal Marines, have been training with their French counterparts in Martinique, to ensure they are fully prepared.

This training is part of a six-month deployment to the region for hurricane season, while RFA Mounts Bay also carried out a significant HADR exercise in July.

Some islands are expected to be impacted by Tropical Storm Issac, today, raising concerns about the physical damage it could wreak.