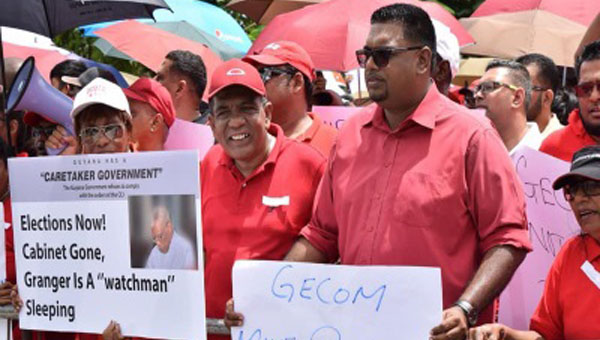 GEORGETOWN, Guyana, July 19, 2019 (CMC) – The main opposition People’s Progressive Party (PPP), today, warned it is prepared to file contempt of court proceedings against Guyana Elections Commission (GECOM) Chief Election Officer, Keith Lowenfield, after earlier accusing the agency of going “rogue” against an earlier court ruling and planning to go ahead with house-to-house registration, to compile a new electoral list for the next general election.

“We don’t want to be caught up on the issue of a long, legal battle again, but we may file contempt proceedings against Lowenfield, but not to go back and re-litigate what the CCJ (Caribbean Court of Justice) has already ordered,” PPP general secretary and Opposition Leader, Bharrat Jagdeo, told supporters, who staged a protest march not far from GECOM offices.

On Thursday, Jagdeo had told a news conference that he was informing the international community “about the rogue behaviour of GECOM, because it is not acting in compliance with the Constitution and the decision of the court”.

“Now we are doing selective protests and we are briefing the international community, because we have seen strong moves there, and we will continue to press the government, here, to comply with the Constitution of Guyana,” he said.

The Trinidad and Tobago-based Caribbean CCJ ruled that a motion of no confidence motion, tabled in the National Assembly on December 21 last year, in the present administration of President David Granger, was successful.

The Court, which is the Guyana’s highest, said while it would not set a date for the polls that must be held within 90 days in keeping with the Constitution, it would hope that all the political actors would adhere to the provisions of the Constitution.

Another ruling of the CCJ regards the appointment of a new GECOM chairman after it said that the former holder retired justice James Patterson selection had been flawed and unconstitutional.

The CCJ called on both President Granger and Jagdeo to ensure that a new chairman is appointed as quickly as possible.

Jagdeo said he feared that the general election could be held next year if there is house-to-house registration, instead of the elections in three months, as in keeping with the Constitution.

“We are a serious political party. We want to see what they’re doing on the ground, but we will fight to stop it and we will stop it, because it is inconsistent with the law; but we will still track it.

“We need to track what’s going on the ground because if you don’t they may tamper with certain things and we want to make sure we cover all angles so we win these elections overwhelmingly,” he told PPP supporters, adding “I wonder on what legal basis is Mr. Lowenfield going forward, because we all accept that the July 12 decision (of the CCJ) overtook any order that was signed before”.

The CCJ referred to the present administration as a caretaker one and Jagdeo appealed to supporters of the ruling A Partnership for National Unity (APNU) coalition to pay careful attention to the law regarding the registration of voters.

“Anybody who is not on the list can get on the list in the claims and objections period without the requirement of a house-to-house registration,” he said, repeating earlier claims that there is evidence that GECOM has circulated folders for enumerators over the past three days to registration offices countrywide.

During Friday’s demonstrations, riot police were deployed to the area surrounding GECOM’s office after the barriers had been pushed aside.

Former PPP government minister, Clement Rohee, who was part of the protest, told reporters that GECOM appears to be acting against the consequential orders handed down by the CCJ, which made no reference to house-to-house registration.

“I hope that GECOM has recognized the strength of the force behind the statement of the opposition party,” Rohee said, while PPP executive secretary, Zulficar Mustapha, said the party is yet to be officially informed by GECOM of the plans for house-to-house registration, starting on Saturday.

“We learnt about it through the press and through some of our activities on the ground,” he said.