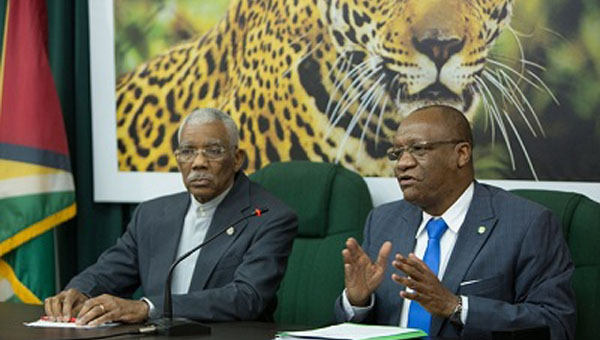 GEORGETOWN, Guyana, August 9, 2019 (CMC) – President David Granger has dismissed concerns, from Guyana’s main opposition People’s Progressive Party-Civic (PPP-C), that foreigners could have an impact on elections in the country.

Speaking during a press briefing, yesterday, Granger said based on information, Haitians who are currently in the country, have no interest in staying in Guyana, and only use it as a transit point to get to other South American countries.

According to Granger, his administration wants to protect “the sovereignty and integrity of Guyana, and we don’t want to be used as a conduit for illegal migration”.

He added that Guyana has already seen the arrival of “thousands of Venezuelan migrants in the country, we are concerned about that. We know of the influx of Cubans, and suddenly, there seems to be a great concern about the influx of Haitians, and my understanding is that they will not be involved in influencing the elections in Guyana, nor will the Cubans, nor will the Venezuelans”.

Figures from the Immigration Department have shown that in the past seven months, just over 8,000 Haitians have arrived in the country, this is in addition to the arrival of 40,000 Cubans, over 40,000 Americans and more than 11,000 Trinidadians.

The President noted that as a member of the Caribbean Community (CARICOM), Haitians enjoy visa-free travel to CARICOM states, and they are also granted a six-month duration of stay in members of the regional body.

Meanwhile, Director-General of the Ministry of the Presidency, Joseph Harmon, on Wednesday, dismissed claims that Haitians entering the country are being facilitated with documents, to participate in the ongoing house-to-house registration process.

The Director-General was, at the time, responding to questions posed to him during the post-Cabinet media briefing.

Harmon, who was asked to provide clarity on the matter, said it has not been brought to the attention of Cabinet, and added that he was unaware of any information regarding foreigners who are not Commonwealth citizens, being registered during the process.

Across local media, it has been reported that an underground operation is being run as the number of Haitians entering the country, through the Cheddi Jagan International Airport (CJIA), have increased over the last few months.