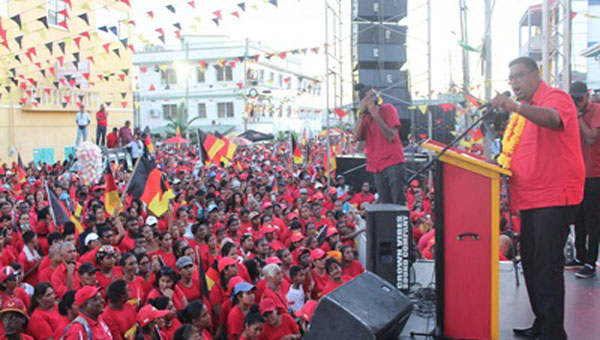 PPP/C Presidential Candidate, Irfaan Ali, told supporters, gathered at the Kitty Market Square in the capital, that the party was confident of reversing the 2015 defeat it suffered at the hands of the coalition, comprised of A Partnership for National Unity (APNU) and the Alliance For Change (AFC) parties.

“I know that I will not be a president that surrounds himself by ministers, who are incompetent and corrupt. The qualities of my leadership and the team will be defined by competence, integrity, experience, youth and desire to serve our people, and not a privileged cabal that this government is doing now,” he said.

“Today, with your support, I commit to you that I would be a president for all our people, not a president for friends and supporters alone, but a president that will work hard, every day, for the upliftment of every Guyanese. No Guyanese must be defined by where you live, how you look or what political affiliation you have,” he told supporters.

Ali promised to rescue Guyana and said that his administration would respect the rule of law and the Constitution.

The PPP/C, through its General Secretary, Bharrat Jagdeo, had, on December 21, 2018, successfully tabled a motion of no-confidence against the government that should have resulted in regional and general elections being held, 90 days later.

But the APNU+AFC coalition government used legal challenges to delay the matter, with the Trinidad-based Caribbean Court of Justice (CCJ), the country’s highest court, ruling in July, last year, that the motion was successfully passed and urged all parties to move quickly towards an election, in keeping with the provisions of the Constitution.

Granger said subsequently, that he would only announce the date for the elections, after he had been given the assurance by the Guyana Elections Commission (GECOM) that it was prepared to stage free and fair elections, here.

“I commit to be a President, who will have the decency to respect the rule of law, uphold the constitution and promote democratic governance,” Ali said.

The former housing minister is before the courts, here, for allegedly conspiring to defraud the government of GUY$174 million, by selling land below market prices, while in office.

He told supporters that there was a need to revive Guyana’s economy by reopening the closed sugar estates, trigger consumer spending, roll back over 200 new and existing taxes to increase spending power, and eventually lower electricity rates by 70 percent through an energy mix of solar, wind and natural gas.

He said his government would revive plans to construct the Amaila Falls Hydropower station.

The Presidential Candidate said, should the PPP/C win the election, the new government would create an estimated 50,000 new jobs in the forestry, mining, petroleum and manufacturing sectors.

In his address, he promised also to send the 74-year-old Granger into “retirement in good stead”, after indicating that he had been aware that at the launch of the coalition’s election campaign, last Friday night, Granger had made several statements regarding him.

Ali told supporters that he will stay away from the attacks, saying “I’ll pull you out of the quicksand… and provide a better life for you”.

He said that the “qualities of my leadership will be defined by competence,” a reference to the ongoing debate, here, regarding his academic qualifications.

Also addressing the campaign launch was the newly-declared PPP/C Prime Ministerial candidate, retired Brigadier Mark Phillips, who said that an integrated, anti-crime and security strategy would be put in place, should the party be elected to office.

“This anti-crime and security strategy will be linked to other strategies for employment creation and poverty alleviation throughout our society, and it will help to open the gateway for prosperity and a better life for all Guyanese,” he said.

Phillips said he was well-equipped to become the country’s next prime minister, saying “my solid combination of experience and leadership will help the new PPP/C administration to move Guyana forward.

“The team approach to nation-building is not a new concept to me, comrades. I have led teams of varying sizes and I have worked on teams as a member. What has always been important to me, is the satisfaction of knowing that my team has created positive change in the lives of ordinary people,” he added.

“I will be the next prime minister of Guyana,” he said, pledging to represent all Guyanese, regardless of their race, religion or political affiliation.