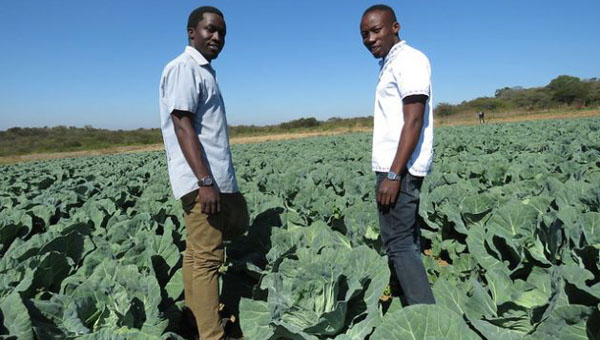 Young farmers and brothers, Prosper and Prince Chikwara, are using precision-farming techniques at their horticulture farm, outside Bulawayo, Zimbabwe. Experts say that unless Africa promotes new and innovative farmers, the continent will be at the mercy of other nations for its food security. Photo credit: Busani Bafana/IPS.

IBADAN, Nigeria, Thursday, January 16, 2020 (IPS) –– Africa will starve, or survive on expensive food imports, because it is not growing new farmers, research shows.

And the challenge remains — among researchers, policy makers, public and private sector actors — to get African youth interested in agriculture on a continent, where a growing number of people go to bed hungry every night.

The International Institute of Tropical Agriculture (IITA), a global research institute that generates agricultural innovations to meet Africa’s most pressing challenges of hunger, malnutrition and poverty, has long been promoting several programs to attract and keep youth in agriculture.

But it has been a tall order to convince the youth that agriculture is the key to creating food and jobs in Africa, IITA Director General, Nteranya Sanginga, told IPS.

“I have wanted the youth to define what agriculture is all about; for them agriculture is pain, penury and poverty,” Sanginga said. “We need to transform that mind-set and get them to understand that agriculture could be a source of wealth, business and pleasure.”

In 2012, the institution launched the IITA Youth Agripreneur, a program that enrols 60 youth for hands-on training in agriculture and entrepreneurship in 24 centres across Africa, each year.

Sanginga said unless Africa promotes new and innovative farmers, the continent will be at the mercy of other regions for its food security.

Africa has 257 million hungry people, according to the Food and Agriculture Organisation of the United Nations (FAO). While Africa holds 65 percent of the world’s uncultivated, arable land and adequate water resources, the continent spends more than $35 billion, annually, importing food — a bill, projected by the African Development Bank (AfDB), to balloon to $110 billion by 2025.

About 237 million people in sub-Saharan Africa are suffering from chronic under-nutrition, which is derailing past gains in eradicating hunger and poverty, said the FAO in a joint 2019 report, Africa Regional Overview of Food Security and Nutrition.

The report underlines the need to accelerate action to achieve the U.N. Sustainable Development Goal, of achieving zero-hunger, as well as global nutrition targets, amidst challenges of youth unemployment and climate change.

“Agriculture and the rural sector must play a key role in creating decent jobs for the 10 to 12 million youths that join the labour market, each year,” the FAO said.

At the heart of the food challenge is the diminishing labour pool. Smallholder farmers keep Africa fed, and agriculture contributes about 30 percent to the continent’s GDP, but the sector is hampered by poor productivity and low investment and the average age of a smallholder farmer in Africa, is 60. Yet young farmers are not being produced fast enough to close the labour gap in agriculture production.

Agriculture has a negative image of not being attractive enough for the more ambitious, tech-savvy youth, who would rather hustle in urban areas than become farmers.

“When we project farming as a viable economic opportunity for young people, we should tell them it is a process and you have to get your hands dirty,” says Lawrence Afere (35), founder of Springboard, an online network of producers and rural entrepreneurs in Ondo State of Nigeria.

Springboard is working with more than 3,000 members, across six states in Nigeria, growing plantains, beans and rice. The network gives the farmers inputs and training and buys back the produce for processing and value addition. 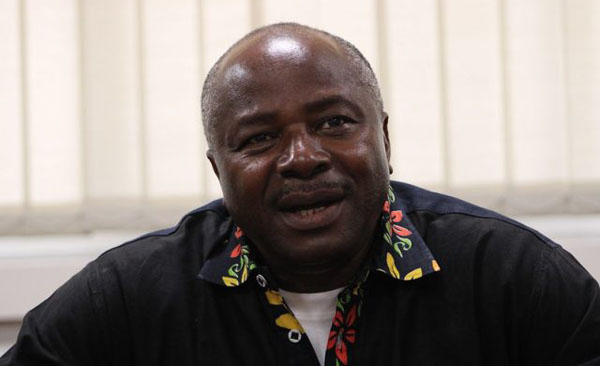 It has been a tall order to convince the youth that agriculture is the key to creating food and jobs in Africa, IITA Director General, Nteranya Sanginga (pictured), told IPS. Photo credit: Busani Bafana/IPS.

The solutions to tackling youth unemployment in Africa are varied, but a key solution is to sell agriculture as a business, says Sanginga, who initiated the “Start Them Early Program (STEP)”, which promotes agribusiness studies to primary and secondary school students, through club participation, course work and experimental learning.

Furthermore, the IITA has taken a research approach to getting more young people involved in agriculture.

The institute launched a fellowship program, under a three-year research grant, called “Enhancing Capacity to Apply Research Evidence (CARE)”, a policy for youth engagement in agribusiness and rural economic activities in Africa.

The action-oriented fellowship targets young academics and professionals and graduate students at the post-course work/research stage of their programs. It is funded by the International Fund for Agricultural Development (IFAD) and has awarded 30 research fellowships in 2019.

The fellowship provides opportunities for the youth, by improving the availability and use of evidence for inclusive and “youth-friendly” policies on youth engagement in agribusiness and rural economic activities. The duration of the research is six months and youth are trained on production of research evidence for policy-making.

University researcher, Akilimali Ephrem, is a 2019 fellow under the CARE program. He is researching traits for successful agriprenuers in the Democratic Republic of Congo.

“I identified that young people were not attracted towards agriculture. They underestimate the value of agriculture, and this has to do with our culture in the DRC,” Akilimali told IPS in an interview.

“Youths are struggling to get jobs, yet they are completing their studies and I saw that this CARE project was a way forward, because it looks at how best we can engage the youth in agribusiness as an alternative to employment,” said Akilimali, whose research title is ‘Perceived social norms, psychological capital and youth agripreneurial intention in DRC’.

“Everyone is saying that the youth should find a life in agriculture and agribusiness, but nobody has ever asked whether these youth would like to do so, or have a desire to do so. Probably we should start by increasing their desire to go into agribusiness, otherwise we shall be targeting the wrong people,” said Akilimali, who identified psychological capital – a positive developmental mind set – as a key ingredient for any successful agribusiness entrepreneur.

Young people in Africa will make up 42 percent of the global youth population and account for 75 percent of people, under the age of 35, on the continent, according to the 2019 World Population Data Sheet, published by the Population Reference Bureau, a United States-based organisation that informs on population, health and the environment.

In the parlance of the youth, agriculture is not ‘cool’, because of its association with back-breaking, long hours of work in the field, for little gain. Limited access to credit, finance, land and appropriate productivity-boosting technology has combined to exclude the youth from the business of farming.

Already, Africa’s food and beverage markets are projected to reach $1 trillion, by 2030, according to the AfDB.

AfDB President, Akinumwi Adesina, has said making agriculture profitable and ‘cool’ for young people, through investment, is the solution to pulling millions of Africans out of poverty, and a means to stem the tide of youth migration to Europe, in search of a better life.

But development researcher, Jim Sumberg, from the Institute of Development Studies in the United Kingdom, is not convinced agriculture is the silver bullet.

Sumberg says the idea of agriculture, as a vast domain of entrepreneurial opportunity for young people, is being grossly over sold, noting there are opportunities for some and for others it is a case of hard work for little reward.

“I believe the idea that a large proportion of young people are leaving rural areas and/or farming is over-played,” Sumberg, told IPS, via e-mail.

“There is no real evidence. Further, why would anyone want to lure young people into tedious, poorly-paid work? It makes no sense! It is true that a modernised agriculture will provide some job opportunities (for youth and others), but I doubt it will be the millions and millions of jobs often promised,” he reasoned.

Sumberg said he had little patience with the idea of changing people’s mind-sets, so that they see “farming as a business”.

It can only be a business if there is the potential for profit, and at the moment, there are many situations where the potential is not there, he noted.