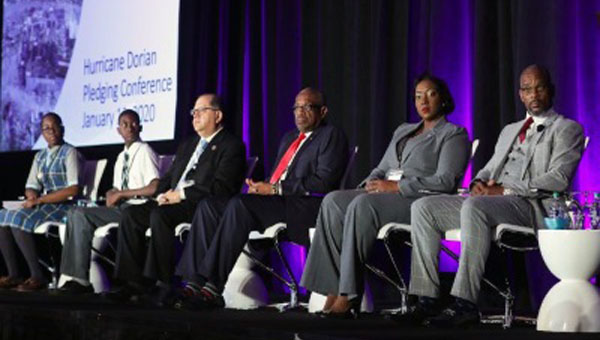 NASSAU, The Bahamas, Thursday, January 16, 2020 (CMC) – The Bahamas has been promised US$1.5 billion in assistance, as it seeks to rebuild the country that was battered by a Category 5 hurricane, last September.

A United Nations Development Program (UNDP)-sponsored Hurricane Dorian Pledging Conference held at the Baha Mar Convention Centre, on Monday, and attended by more than 300 local and international delegates, has also resulted in “some unspoken pledges”.

Prime Minister, Dr. Hubert Minnis, explained that the pledges were “an important step in the ongoing reconstruction and rebuilding of areas, affected by Hurricane Dorian, so that we may rebuild stronger and with more resilience”.

“We are grateful to domestic and international partners, including foreign governments. We look forward to other possible contributions to help in our recovery efforts,” the Prime Minister said, in a statement.

Minnis had earlier promised that his administration would look to simplify a number of investment requirements and expedite investment applications.

“We will liberalize the process of investment for the affected areas,” he said, adding “hard and difficult decisions must be made if we are to rebuild, rebuild quickly, smartly, and with resilience”.

Minnis promised that further details will be released in the coming weeks.

“The outpouring of support is just tremendous. In fact, it exceeds my expectations,” said Minister of State in the Ministry of Disaster Preparedness, Management and Reconstruction, Iram Lewis.

She described the one-day conference as being “very successful”, adding “there were some unspoken pledges also”.

“The government from Kuwait, based on what they said, I do believe that they will come back, once they receive authorization to perhaps make a pledge. And I expect that other governments from around the globe will also phone in, as the German government did …there will be more private pledges also, so I do expect the number to go up,” she added.

The Managing Director of the Disaster Reconstruction Authority, Katherine Forbes-Smith, said that the donations are a combination of cash, technical assistance and “other” forms of assistance.

“We thank the donors, who pledged at Monday’s conference, for their support of the restoration of Abaco and Grand Bahama. The Authority, as the agency charged with spearheading the reconstruction effort, will work with these local and international partners to ensure that Abaco and Grand Bahama are rebuilt better and stronger.

“Through these partnerships and assistance we also hope to boost both economies and build back with new, greener technology and resiliency.”

“People just want to help,” Forbes-Smith noted, adding “you know, when you have this kind of disaster and there are continuous disasters around the world, it’s important you keep your name out there and make sure people know The Bahamas is still in need of help”.

The conference was held under the theme, “Rebuilding a Stronger and More Resilient Bahamas”,  and Prime Minister Minnis said his administration has already prepared specific reconstruction delivery plans, which have been cross-referenced with the $3.4 billion damage and loss assessment by the IDB and the United Nations Economic Commission for Latin America and the Caribbean (UNECLAC).

A government statement said, on Tuesday, that as a follow up to the conference, the UNDP and the government will issue a detailed account of the commitments made, disaggregated by sectors and stakeholders.