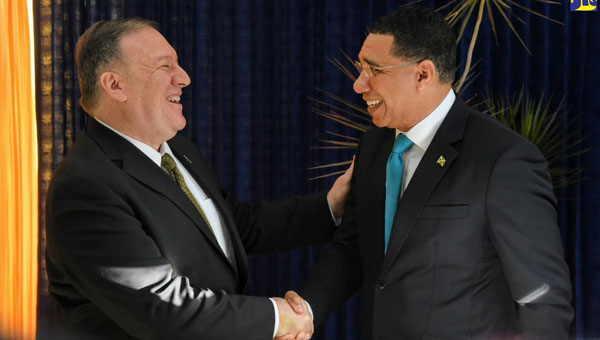 KINGSTON, Jamaica Friday, January 24, 2020 — Prime Minister, Andrew Holness, says that Jamaica and the United States (US) will be strengthening cooperation on security matters.

He said that the main focus will be on bolstering Jamaica’s capacity to counter transnational organised crime, secure its borders and ports, and interrupt the flow of illicit weapons into the country.

“I cannot overstate the urgency with which we need to address these security matters… and I have also emphasised their importance in my discussions with [US] Secretary of State, Mike Pompeo, today,” he said.

The Prime Minister was addressing a joint press conference, held at the Office of the Prime Minister, on Wednesday, following bilateral discussions with Secretary Pompeo, who was on a two-day working visit to the island.

The Prime Minister, who noted that the talks went well, shared that he and Secretary Pompeo engaged in discussions on critical issues of mutual interest to both countries.

“The aim of our talks was to reaffirm our mutual commitment to partnering for greater peace and prosperity in our respective countries and, indeed, across this hemisphere,” he said.

He noted that at the wider level, securing Jamaica also requires sustained intervention on the economic and social fronts.

“We are determined to position Jamaica to take advantage of every opportunity that presents itself to grow the economy, so that large and small businesses, as well as our communities and citizens, can reap the benefits,” he said.

The Prime Minister also noted that he reaffirmed Jamaica’s keen interest in building upon the economic partnership between the countries.

“We will bolster cooperation in the area of energy security, increased trade, and, importantly, we restated our desire to see greater US investment in Jamaica and across the region,” he said.

Holness further noted that he is pleased that the countries are working well together on the socio-economic front, where Jamaicans continue to benefit from educational opportunities through the Fulbright programme and other exchanges.

“We also value the outstanding work being undertaken by the United States Agency for International Development (USAID) and the US Peace Corps at the community level, to build the capacity of microenterprises and to address crime and violence among youth. It is important that we recognise that work geared towards the creation of stable and prosperous communities is ultimately work geared towards a stable and prosperous region,” he said.

For his part, Secretary Pompeo noted the discussions with Prime Minister Holness served to strengthen the friendship between the countries and set the table for greater engagement.

“We are natural allies, natural friends. We have a close and historic relationship with Jamaica that is built on a whole lot more than just proximity,” he said.

Secretary Pompeo noted that the US has provided Caribbean nations with more than $600 million in much-needed funding in the last decade on initiatives to stop the flow of drugs and transnational crime in the region.

“Our expectations [are that] those funds will augment home-grown efforts to protect all Caribbean peoples,” he said.