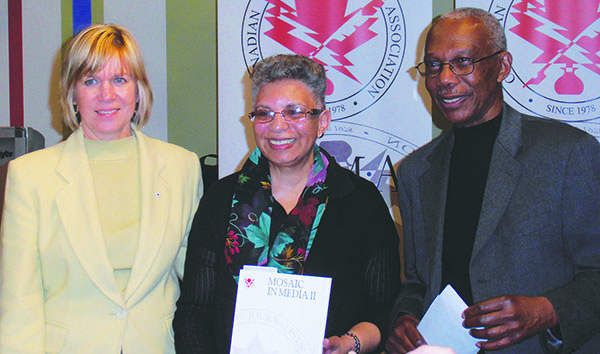 TORONTO, Ontario — Herb Carnegie, appropriately described as “one of the best ever players to never play pro-league hockey”, during the 1940s and 1950s when Blacks were barred from playing in the National Hockey League (NHL), was inducted into the Ontario Sports Hall of Fame, on Tuesday, February 4.

The official gala ceremony takes place in the fall.

The interesting story of Herb Carnegie, an African Canadian Achievement Award (ACAA) Lifetime Achievement Award recipient, is not about sports but “about life itself,’’ his daughter, Bernice Carnegie, told an audience in Toronto, last week Thursday.

Her father, who died two years ago at 92, had an illustrious minor league hockey career in the 1940s and 50s, playing with teams such as the Sherbrooke St. Francis and the Quebec Aces.

All that still wasn’t enough for him to be selected to an NHL team.

“It hurt so badly because he was not given that opportunity to play in the NHL. It was clear racism,’’ said Bernice Carnegie, who now dedicates her time to spreading her father’s positive message through the Future Aces Foundation.

Her father, a former Canadian golf champion, established the country’s first registered hockey school in 1954. It was called the Future Aces Hockey School.

The goal was not just teaching hockey skills and sportsmanship, but also encouraging young people to adhere to a creed that promotes positive attitude, cooperation, courage, confidence, empathy and service.

Carnegie said the foundation has provided more than $600,000 in scholarships; delivers talks to over 15,000 young people each year; and provides training and makes presentations to police forces and other organizations.

Carnegie said her family’s roots in Ontario date back 100 years, with some ancestors having lived under slavery in the United States before moving to Canada.

Her father and mother, Audrey May, came here from Jamaica and parented four children.

Carnegie, 68, said that like her parents, she grew up as the only Black student at her school in North York.

She described her late father, who has had a school and the North York Centennial Centre renamed after him, as an “incredible man who has taught me so much about life’’.

He has been inducted into 11 halls of fame.