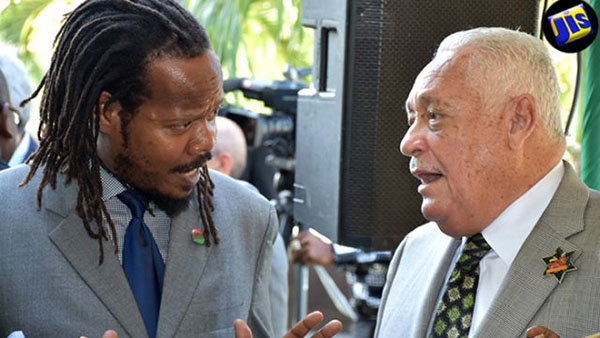 Jamaica's Transport and Mining Minister, Michael Henry (right), in conversation with Head of the Universal Negro Improvement Association (UNIA), Steven Golding. The occasion was a floral tribute to National Hero, Marcus Mosiah Garvey, in commemoration of the 129th Anniversary of his birth, on August 17, at National Heroes Park. Photo credit: Photo: Mark Bell/JIS.

The launch was preceded by the 7th annual Marcus Garvey lecture, given by Director/Curator of Liberty Hall, Dr. Donna McFarlane, who presented under the theme: ‘Education for Liberation: The Role of Museums’.

The redesigned museum boasts the addition of two new exhibits on Africa and Self-Identity, and will provide visitors with historical information on Africa that deconstructs colonial histories and dispels myths.

These exhibits will also seek to inspire people of African descent to embrace their natural selves and achieve positive self-identity for liberation.

In her remarks, Dr. McFarlane said all of Jamaica’s public museums are within communities occupied by poor people, yet there is little identification with exhibitions.

“The folk museum is a case in point as its unspoken intent is to represent Blackness, yet for the Black population surrounding the museum, there is little identification with, attachment to, or ownership of the museum,” she said.

Dr. McFarlane noted that since the opening of Liberty Hall in 2003 as a cultural educational institution, data have been collected on visitors to the museum, who participate in its programmes.

The purpose of the data collection, she said, is to determine what communities are served by the projects and programmes of Liberty Hall; what age groups and gender mix avail themselves of the programmes; and the responses of adults, when asked about their experiences with issues of self-identity.

“Analysis of the data reveals the extent of the need for transformative narratives and the effectiveness of Liberty Hall’s programmes to raise consciousness and positively influence individual’s self-identity,” Dr. McFarlane said.

She added that museums in Jamaica can and should contribute to raising the self-esteem and self-identity of Jamaicans of African descent.

Meanwhile, Minister of Culture, Gender, Entertainment and Sport, Olivia Grange, commended Liberty Hall for staging the yearly lecture in honour of the life and work of Marcus Garvey.

“We do not take for granted the tremendous value of these initiatives that are undertaken each year with commitment and renewed vision,” Grange said, in a message read by Principal Director of Culture in the Ministry, Dr Janice Lindsay.

The Minister added that the Ministry will ensure that at the policy level, museum development is supported.