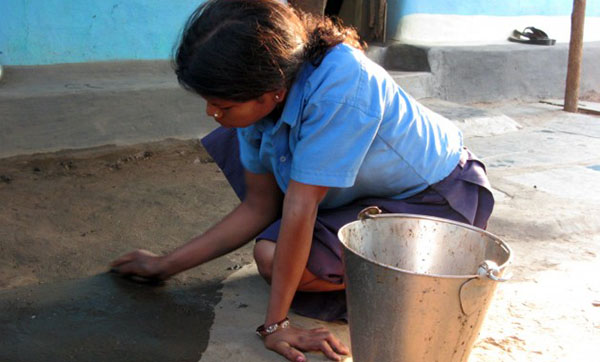 KANKER, India, (IPS) – Early in the morning, 14-year-old Sumari Varda puts on her blue school uniform but heads for the village pond to fetch water. “I miss school. I wish I could go back,” she whispers, scared of being heard by her employer.

Sumari is from Dhurbeda village, but now lives in another, Bhainsasur, both located in central India’s Chhattisgarh state. She puts on her school uniform to fetch water because it is one of the few pieces of clothing she has.

Her native village Dhurbeda falls in Abujhmad, a forest area in Narayanpur district that is reportedly one of the largest hideouts of the outlawed Communist Party of India-Maoist, which leads a violent rebellion against the state in some parts of the country.

Nine months ago, a distant relative from state capital Raipur visited Sumari’s parents, who were worried that she might be asked to join the Maoists some day. The relative, whom Sumari calls “Budhan aunt”, took her away, promising to send her to a city school.

Instead, she sent Sumari to Bhainsasur, about 180 km from Raipur. Now the girl toils for more than 14 hours a day in the house of the aunt’s brother, cooking, washing, fetching water and sometimes also looking after cattle.

Sumari is one of thousands of children trafficked out of Chhattisgarh every year. According to a 2013 study published by the United Nations Office on Drugs and Crime (UNODC), more than 3,000 children are trafficked from the state each year.

The report focuses on the northern districts that are deemed less affected by the conflict. Districts such as Dantewada, Sukma, Bijapur, Kanker and Narayanpur, which are considered the hotbed of the Maoist movement, are not included in the report.

The reason is an acute shortage of data, says a government official at the department of rural development who doesn’t wish to be named for fear of punitive action. The official tells IPS that researchers and surveyors stay away from the remote districts.

“In April 2010, Maoists killed 76 security personnel in Dantewada. Since then, the conflict has reached such a level that few actually dare to visit districts like Dantewada, Sukma or Narayanpur. If you don’t go into the field, how will you collect information and data.”

Bhan Sahu, founder of Jurmil Morcha, the state’s only all-tribal women’s organisation that fights forced displacement of forest tribal communities, believes the absence of data is actually helping the traffickers.

“Every time a massacre or an encounter takes place between the Maoists and the security forces, many families flee their villages. Traffickers target these families, pay them some money and offer to take care of their children.

“But the government doesn’t want to admit either the migration or the trafficking. So the traffickers are not under any pressure,” Sahu tells IPS. She has reported several cases of trafficking for CG-Net Swara, a community newswire.

Jyoti Dugga, 11, who plays hula-hoop with iron rings to entertain tourists on the beaches of Goa in western India, also hails from Chhattisgarh. Her elder brother had been jailed for alleged links with Maoists. Her parents were worried that she too might be arrested. Three years ago they agreed to send her away with a neighbour called Ramesh Gota, addressed by Jyoti as “uncle”.

“Uncle said he had many contacts and could give me work, so my parents sent me with him,” says Jyoti, who also massages tourists’ feet. She shares a small room with three other children, all of whom are from Chhattisgarh and look malnourished.

Earlier this month, 20 children who were being forced to work in a circus in Goa were rescued by the police. But Gota, Jyoti’s employer, seems too clever to be caught – he keeps moving the children from one beach to another.

The government denies such trafficking and exploitation of children.

Ram Niwas, assistant director-general in the Chhattisgarh police department, claims that human trafficking has “gone down considerably” since anti-human trafficking units were sanctioned. “The process of identifying such districts is under way and they would be prioritised,” he tells IPS.

The UNODC report says Chhattisgarh’s performance in implementing child protection schemes is inadequate. “The district child protection units are not in existence, and the child welfare committees are not working to their proper strength,” says the report.

According to the report, the state is not serious in taking back children who have been trafficked out.

Child rights activist Mamata Raghuveer, in neighbouring Andhra Pradesh state agrees. She heads the organisation Tharuni, which rescues trafficked children in collaboration with the state government. According to Raghuveer, 65 girls have been rescued in the past two years. Most were from Chhattisgarh’s conflict-hit districts.

“Girls as young as seven and eight are brought out of their home by men,” Raghuveer tells IPS. “Some are employed as domestic workers, others are sold to sex traders. When the men are in danger of being caught, they vanish, abandoning the girls.”

The government has a National Child Labour Policy (NCLP) for rehabilitation of children forced into labour. Rescued children in the 9-14 age group are enrolled at NCLP special training centres where they are provided food, healthcare and education, says Kodikunnil Suresh, national minister of state for labour and employment told parliament in February. “Currently there are 300,000 children covered by the scheme,” he said.

This IPS correspondent met nine-year-old Mary Suvarna at an NCLP centre in Warangal in Andhra Pradesh. She was rescued a year ago from the city railway station. Mary says she lived in a forest village called Badekeklar. It’s unlikely she will ever return home.

She has a dream. “I want to be a police officer.”