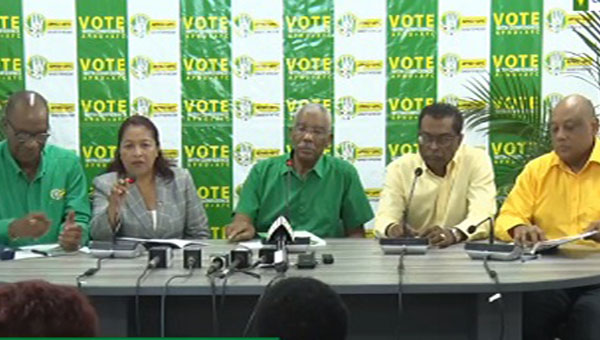 GEORGETOWN, Guyana, February 14, 2020 (CMC) – The ruling coalition — A Partnership for National Unity (APNU) and the Alliance For Change (AFC) — launched its “very ambitious” manifesto, for the March 2 regional and general election, today, indicating that the promises, outlined in the document, will be achieved, over the next five years.

President, David Granger, told a news conference, that the “ambitious” program is “attainable and affordable”, and insisted “this manifesto …is sincere”.

“We have had experience in government and we come to you, the Guyanese people, with every sincerity, knowing that we will deliver on our promise,” he said, noting that the document is not a “huge encyclopaedia….but something that is highly readable, and that the woman in Stabroek could read and understand what we talking about”.

Granger, flanked by other members of the coalition, including Khemeraj Ramjattan, the Prime Ministerial Candidate and the leader of the Alliance for Change (AFC), the second major party in the grouping, said the 32-page document “is straight forward, no confusing language, no high-flown concepts (which) every Guyanese could read and understand”.

“We promise you, the Guyanese people, that we will perform, what we are promising here, we will produce, we will deliver,” added Ramjattan.

According to Granger, the manifesto titled, “A Plan for A Stronger Guyana”, is “very ambitious” and should not be regarded as a “campaign manifesto”.

Granger, 74, who is leading the coalition into its second general election, said the manifesto is also an agreement, between the six parties within the coalition, and representing the majority of the people in Guyana.

“That is important. This agreement is not a minority manifesto, it is an agreement which has come out of the intellect and interest of the majority parties…representing over 207,000, who came to vote for APNU (and) have their views embedded in this document”.

Graner insisted that the promises, outlined in the document, “are attainable”, adding “there is all the temptation for people to over promise, because some of them know they can’t win anyway”.

“We have been very realistic, we have been in government and we have brought our experience to bear, on crafting this manifesto,” he said, noting that the promises contained would be financed by the “prudent and judicious use of our revenues”, a reference to the funds Guyana should generate, as a result of recently becoming an oil-producing country.

Under its economic program, APNU says the objective is to maintain high levels of growth and to ensure a more resilient and competitive economy.

It is promising to institute measures, which will generate increased employment and provide opportunities for entrepreneurship and economic prosperity.

“Guyana is now poised to achieve rapid economic development. We have recorded the fastest known rate of movement from substantial discoveries to consequential large-scale petroleum production.

“We have launched a Decade of Development, which will see the emergence of a modern and prosperous country, through the efficient and effective combination of our productive resources – its people, its entrepreneurship, its capital and its natural endowments. We shall build a nation, in which all citizens will enjoy a standard of living for which they have yearned and which we have started to deliver,” the manifesto noted.

It said it intends to implement the Natural Resources Fund Act fully, as well as the recommendations of the Guyana Extractive Industries Transparency Initiative (EITI) Report for 2017 Fiscal Year, in order to improve the EITI process.

It will implement measures, within the Guyana Revenue Authority (GRA), to monitor the oil and gas sector; institutionalise the new production-sharing agreement model; and amend the Petroleum Exploration and Production Act.

Ramjattan told reporters that Guyana will develop “into a mighty nation, as a result of all those revenues and national unity”.

“This manifesto that we are launching, this morning, is a statement of principles, as to our commitment as to what we are going to do…and we have them in every sphere of activity that the government must indulge in,” he added.

He said the governance program would include constitutional reform, fiscal governance, enhancement of public procurement, eradication of financial fraud and corruption, human rights, and security, among other initiatives.

“This manifesto is but a reflection…of that set of programs that we are going to put together. That is our contract with the people. Put us back in government and these are the things we are going to do and, certainly with the revenue streams, we are going to get done,” he added.