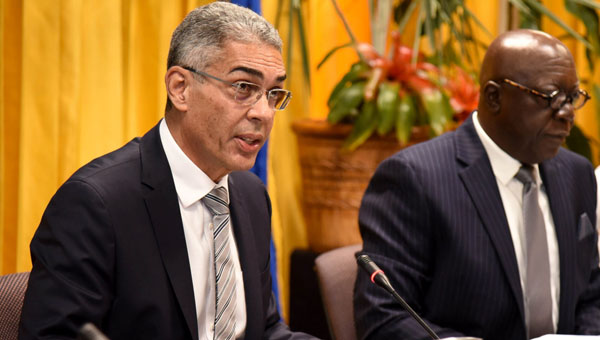 KINGSTON, Jamaica February 21, 2020 — The Bank of Jamaica (BOJ) reported a significant increase in credit, extended by deposit-taking institutions, to businesses and households for the 12-month period, ending December 2019.

BOJ Governor, Richard Byles, said credit to businesses grew by 20.3 percent, while the provision to households increased by 16.5 percent.

“This growth was notably faster than the expansions of 15.4 percent and 12 percent in credit to businesses and households, respectively, which were recorded in 2018,” he pointed out.

He said, further, that the number of firms securing financing from the issue of corporate bonds and equity, is “encouraging”.

The Governor was addressing the quarterly media briefing at the BOJ’s downtown Kingston headquarters, yesterday.

Accommodative monetary policy is where a central bank attempts to expand the overall money supply to boost the economy.

The Bank has maintained the policy interest rate, on overnight placements from deposit-taking institutions, at 0.50 percent, as at Thursday, having incrementally reduced the figure from 3.25 percent, at the start of 2018.

The Governor said the decision is based on the BOJ’s assessment that monetary conditions continue to be “generally appropriate” to support inflation, remaining within the target of four to six percent, over the next eight quarters.

The inflation target was set by the government to facilitate a faster pace of economic growth, while supporting Jamaica’s ongoing debt-reduction strategy.

“In response, we have seen that the deposit-taking institutions – commercial banks, merchant banks and building societies – have recorded strong growth in loans, as well as marked reductions in lending rates on local currency loans,” he pointed out.

Byles, who, late last year, expressed concern that the anticipated reductions in rates to the public, from the policy rate adjustments, had not been materialising at the desired level, indicated that he had several meetings with representatives of those institutions to discuss the issue.

He said those talks resulted in a significant boosting of credit being issued to businesses and households.

“Generally, new loans have been issued at rates that are better than, and more competitive to, previous loans issued,” he noted.

In terms of the impact on the growth numbers, the Governor noted that while there was a fallout in mining and agriculture, there were marked increases in tourism and manufacturing, resulting in growth trending upwards, from 1.1 percent for the September 2018 quarter, to 1.4 percent in the September 2019 quarter.