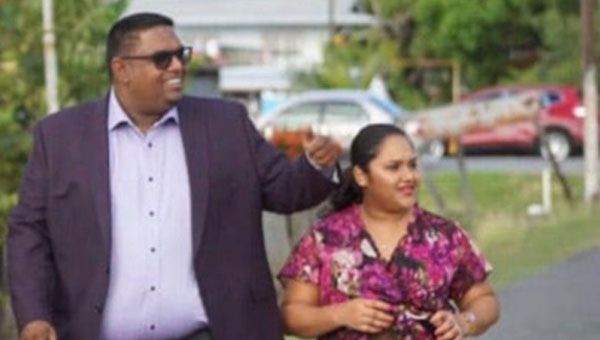 LEONORA, Guyana, March 2, 2020 (CMC) – The Presidential Candidate for the main opposition, People’s Progressive Party/Civic, (PPP/C), Irfaan Ali, said, today, he is confident of victory in the regional and general elections, even as his Party complained about some of its supporters being given misinformation about polling stations.

Ali, a former Housing Minister, accompanied by his wife, Anya, voted in his hometown of Leonora, on the West Coast of Demerara.

“We are on track and we are very confident. Our supporters are coming out in their numbers, and I think we are heading for victory, today,” Ali told reporters.

But he said that he has received some reports of some voters having to wait long in lines, and receiving wrong information about their polling stations, but those reports are being investigated.

“Voters have related to us, that they are getting misleading information and they are going to the wrong lines…a lot of those reports came from the East Coast Demerara,” he claimed.

In a statement, posted on his Facebook page, PPP/C General Secretary and former President, Bharrat Jagdeo, appealed to voters to remain in the line to ensure that they vote in the election.

“The General Secretary is urging you to stand your ground, in the face of attempts to frustrate you, from casting your ballots. The process might be slow, the lines might be long, but please bear up. Your vote in important,” the statement read.

Ali said he was also appealing for persons to assist others, who may be in need of transportation and assistance to get to their polling places.

“We are all Guyanese and we have to live together,” he said, urging however, that the electoral process needs to be respected.

Meanwhile, officials from the US-based Carter Centre, which is among a number of local, regional and international groups monitoring the elections, said that they have been encouraged by the turn-out, so far.

“What we have seen, so far, is only a little snippet of the whole elections, and so, we think, people need to be patient,” said Jason J. Carte, in response to questions to reporters that some voters have complained about long lines.

Former Senegal Prime Minister, Aminata Touré, who, like Carter, is a co-Leader of the team, here, said “this is a big day for Guyanese democracy, and my message to the Guyanese people is to go out and vote”.

“We do know that through democracy, we build our nation, as one nation, and it is very important that people go out and vote. Young people, women and the elderly and people living with a handicap, and I also ask them to be patient, because elections are also about being patient,” she added.

The Guyana Elections Commission (GECOM) said that there are an estimated 2,339 polling stations scattered across the country. Tents have also been erected to serve as polling stations, and GECOM Chair, retired Justice Claudette Singh, said that security had been beefed up at all polling stations.

GECOM held a news conference, today, and said it was pleased with the process of voting, and had not little, or no, complaints from the estimated 661,000 persons eligible to cast ballots in the election.