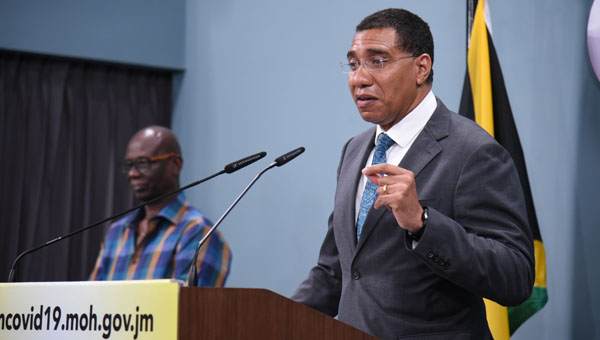 “The Easter period presents us the perfect opportunity to slow the spread of the disease, during the third incubation period, after our first confirmed case and the second incubation period, since the arrival of incoming passengers, between the 18th and the 23rd of March 2020,” he said.

“The Stay-at-Home Orders are designed to specifically limit unnecessary movement of people, which will limit the movement of the virus.”

Curfews were first imposed on April 1, to last until April 8.

During the period April 8 to 21, persons with flu-like symptoms – fever, coughing and sneezing persistently – or who have respiratory illnesses, must wear a mask in public.

Senior citizens, over the age of 65; persons caring for someone at home with a flu-like or respiratory illness; as well as individuals with co-morbid conditions, such as diabetes or hypertension, must also wear a mask, when they are in public spaces.

Holness said that while members of the public are encouraged to wear a mask, the selected categories of persons mentioned, must wear a device that is fitted to cover the nose and the mouth.

“It could be a scarf, but the masks that we are used to, which go over your ears, we recommend those as the best types, because they are functional, they have the material that filters the virus that we’re trying to avoid. If you can get those, that’s great, but what we really want is the covering of the nose and the mouth,” he stated.

The Prime Minister also recommended that persons, who are visiting places, where people are gathered, such as markets, or taking public transportation, should wear a mask.

In addition, citizens, over the age of 70, persons with co-morbidities, as well as those who have flu-like and respiratory symptoms, have also been ordered to stay home, during the period April 8 to 21, but they may leave their premises, once per day, for food, medicine and other necessities of life.

“During this outbreak, many cases have been brought to my attention, of persons with symptoms, who have said, ‘Oh, cho! It’s just a little cold’ or ‘it’s just a little flu’ and they have merrily gone on their way and, it turns out, that after they have fallen very ill and when tested, they are positive for the coronavirus,” he noted.

“But having gone on their careless escapades, they would have also infected others. So, a part of the strategy of the government, is to ensure that if you are ill, with any symptom at all, which suggests a flu or a respiratory kind of illness, stay at home,” Holness implored, noting that persons could face penalties for refusing to comply.