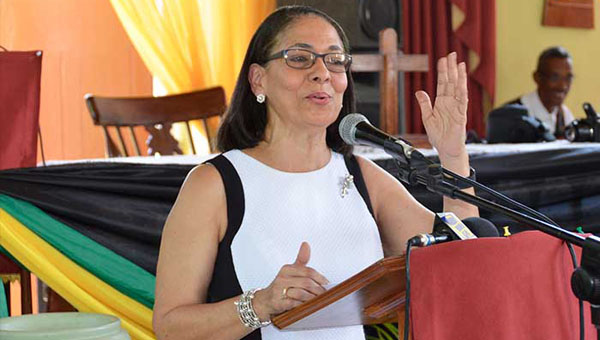 KINGSTON, Jamaica, May 30, 2020 (CMC) – Prime Minister, Andrew Holness, led the tributes to former Labour and Social Security Minister, Shahine Robinson, who died, yesterday, after a long battle with cancer. She was 66 years old.

“An earnest and passionate member of the Jamaica Labour Party (JLP), Shahine never wavered in her love for her party. She fought, courageously, against her illness; her passing has left us with a sense of deep sorrow, and we shall miss her, dearly,” Holness said.

He described the former Member of Parliament for St. Ann North Eastern, as a “much-loved political representative, adored by her constituents, a humanitarian and great personal friend”.

Robinson, who was visited by Prime Minister Holness and Minister of National Security, Dr. Horace Chang, earlier this week, died of lung cancer, and had been in and out of hospital, since 2018.

Opposition Leader, Dr. Peter Phillips, said although Robinson was ailing for some time, the news of her death is shocking.

“She was a hard-working politician and Cabinet minister, who conducted the affairs of the ministry with dignity and decency. This, over the years, gained her the respect of her parliamentary colleagues, on both sides of the political divide. On the political hustings, she was formidable and organized,” Phillips observed.

“Shahine had good relationships with persons, on both sides of the aisle, and pursued her job with basic decency,” he added.

Former Prime Minister and Minister of Labour, Portia Simpson, said she was heartbroken to learn of the passing of Robinson, adding “my sincere condolences to her family, friends, staff and to her JLP family. May her soul rest in peace and light perpetually shine upon her”.

The Mayor of Kingston, Delroy Williams, said he was also saddened by the death, and that his “thoughts and prayers are with Shahine’s family and constituents at this time”.

Born on July 4, 1953 — to parents, Peter and Kathleen Robinson, and raised in Claremont, St. Ann — Robinson came to national prominence in 2001, after she won the by-election for the Jamaica Labour Party (JLP). Since that time, she has not lost the seat.

She was appointed as Minister of Labour and Social Security in March 2016, following the JLP’s victory in the general election, held a month earlier.

The former Labour Minister graduated from Immaculate Conception High School, and went on to Miami Dade College in the United States, where she earned an Associate Degree in Marketing and a Diploma in Public Relations.