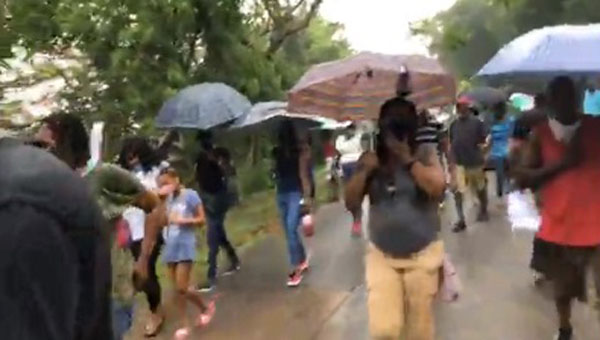 ST. GEORGE’S, Grenada, June 30, 2020 (CMC) – Police appealed for calm, on Saturday, after hundreds of Grenadians braved the inclement weather, to protest the beating of a Black man, allegedly by members of a White family, after their dog was accidentally killed in the influential community of Fort Jeudy, on the southern tip of the island, earlier last week.

The demonstrators were calling for justice for Evans Smith, a driver of a van, who was dropping off construction workers on Thursday, when the dog, barking beside the vehicle, was run over and killed.

The owner of the dog, a businessman, is reported to have accosted Smith, informing him that he should not leave the scene. But the situation descended into an altercation, with the man, and three other members of his family, physically assaulting Smith, in the presence of witnesses.

The police later informed Smith that they were not going to press any criminal charges, and that he should look to settle the matter privately, or through a civil lawsuit.

But after the story of the incident was aired on local media, on Friday night, enraged citizens took to social media, complaining that White foreigners were being provided with more rights and privileges than nationals, and organised the protest for Saturday.

The authorities have not released the names of the family members involved in the altercation, but media reports said they are investors, doing business at one of the island’s marinas.

The police have since issued a statement, calling for calm.

“Acting Commissioner of Police, Edvin Martin, has ordered an investigation into an alleged altercation that occurred at Fort Jeudy, St. George. Progress on the status of the matter will be made public, in an upcoming press brief, scheduled for Monday 29th June 2020.

“While the police recognize the people’s right to assemble, the Royal Grenada Police Force is appealing to the general public to be calm, as investigation continues in the matter,” the statement noted.

The protesters, armed with placards, demanded that Smith, who suffered lacerations to his face, be given swift justice.

“We want justice and we want it now,” they chanted at the site of the incident.

They made reference to the Dogs Registration and Control Act, which states, in part, that an owner or person in charge of a dog, must not permit the animal to be in any public place, unless it is kept under proper control.

A person, who fails, without reasonable excuse, to comply with the legislation, commits an offence, and is liable, on summary conviction, to a fine of EC$1,000.