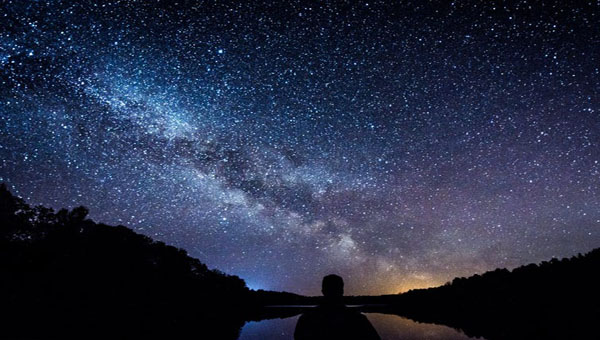 On December 21, Jupiter and Saturn was so close together they will almost appeared to be touching. Photo credit: Unsplash.

Jupiter and Saturn lined up on December 21, so close together, that they appeared as one bright shining star. Many referred to it as the “Christmas Star”. It’s the closest the two planets have appeared together in about 800 years, and won’t occur again until 2080.

This conjunction of Jupiter and Saturn may have an even closer tie to the Biblical story of the birth of Jesus Christ than its occurrence so close to Christmas this year. As noted by Johannes Kepler in the 17th century, a similar conjunction occurred in 7 BCE and could be the astronomical origin of the Star of Bethlehem that guided the wise men.

But there are notable differences between the two events, and the full story has several interesting ties to the history of astronomy, starting with the origins of the word “planet,” which comes from the Greek word meaning “wanderer.”

The planets have always been recognizable to astronomers, not only because they are relatively bright points of light among the stars, but because of their unique wandering nature. This posed a problem to ancient astronomers, which lasted more than 2,000 years and was only resolved during the Scientific Revolution. 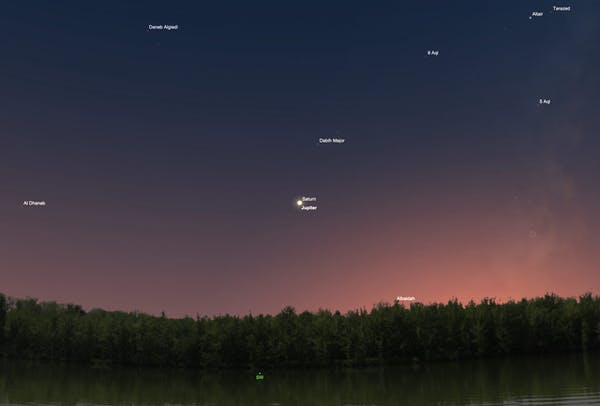 A graphic, made from a simulation program, showing a view of the 2020 great conjunction through the naked eye, just after sunset at approximately 5:15 p.m. (EST) on Dec. 21. Photo credit: NASA.

The motion of the planets
As the Earth spins on its axis every 24 hours, the sun, moon, stars and planets all appear to move across our sky, rising in the East and setting in the West. But because the planets orbit the sun, all travelling in counterclockwise directions when viewed from above the North Pole, to us on Earth the sun and planets all appear to move with respect to the background stars.

As Earth moves around the sun, the sun in turn appears to move slowly to the East, by about a degree each day as it travels through the Zodiac constellations. Mercury and Venus move from one side of the sun to the other as they circle it. And the outer planets of the solar system — Mars, Jupiter and Saturn are visible to the naked eye — appear to move East through the stars as they orbit the sun. 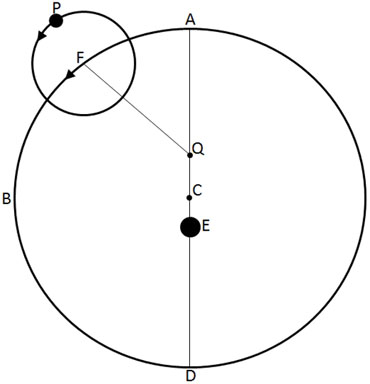 The Earth-centred model of planetary motions could explain why other planets sometimes appeared to be moving backwards. Nicolaus Copernicus proposed a sun-centred theory in 1543. Photo credit: Muhammad/Wikimedia; CC BY-SA.

But a peculiar thing happens to the positions of the outer planets when the Earth passes between them and the sun: They appear to briefly reverse direction, and travel West, against the background stars. This apparent retrograde motion is caused by a parallax shift that occurs for the same reason your thumb hops back and forth if you hold it fixed in front of your face and wink first with one eye, then the other; it’s an optical illusion caused by a shift in our perspective.

While the Ancient Greeks had considered this explanation of the retrograde motions of planets, they mainly preferred an alternate, Earth-centred model in which the planets move around a fixed Earth on small circular orbits, the centres of which went around larger, Earth-centred circles. Thus, as the planets orbited an empty point in space while that point went around the Earth, the planets would occasionally stop and move backwards in their motion against the background stars.

Astronomers mainly described the solar system in this Earth-centred way until Nicolaus Copernicus proposed a sun-centred theory in 1543. Copernicus’s theory didn’t do any better job of describing planetary motion than the Earth-centred models did, but the idea gained traction.

The German 17th-century astronomer Johannes Kepler eventually found the key to describing planetary motion in a sun-centred system. Rather than orbiting the sun in circles, Kepler found the planets moved in ellipses, a distinction that allowed him to precisely predict their observed positions.

Christmas Star
A conjunction is said to happen when two astronomical objects pass each other due to their movement along the direction of the stars’ daily rotation. Since solar system objects do not all move within precisely the same plane, conjunctions can sometimes happen with a wide separation. Since Jupiter orbits the sun every 11.9 years while Saturn’s orbit takes 29.5 years, it happens that a conjunction of Jupiter and Saturn — called a “great conjunction” due to its rarity — occurs roughly every 20 years. 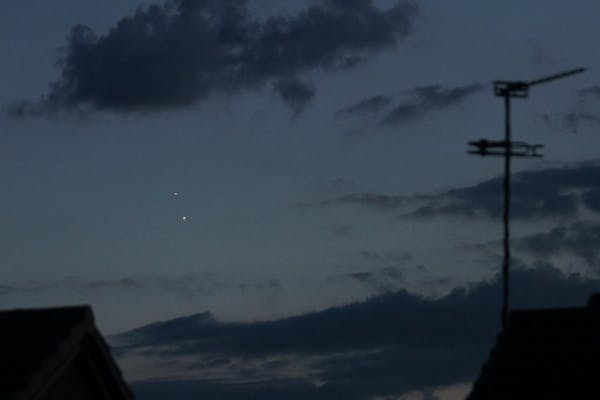 Most great conjunctions are not particularly notable. But occasionally, like this year, Jupiter and Saturn cross paths so close to each other that they can be barely distinguishable to the naked eye. Or sometimes the two planets cross paths when they are opposite the sun, so their apparent retrograde motion results in a triple conjunction, as was the case in 7 BCE.

In 1604, while he was working in Prague, Kepler observed the tight arrangement of three planets — Mars, Saturn and Jupiter — and a bright new star, a supernova, that would slowly fade over the course of a year. This occurrence inspired him to consider a similar set of events that might have led the wise men to Bethlehem in time for Jesus Christ’s birth.

Knowing that Herod the Great had died in 4 BCE, he placed the birth of Christ before that date. And using his knowledge of planetary motion, he found that Jupiter and Saturn underwent a triple conjunction in 7 BCE, that conjunctions of Mars with each planet in 6 BCE were shortly followed by conjunctions of the planets with the sun. Kepler suggested that these solar conjunctions aligned with the conception of Christ and that the wise men arrived the following year to witness Christ’s birth beneath the Star of Bethlehem.

Significance of the great conjunction
On December 21 of this year, Jupiter and Saturn were only one-tenth of a degree apart, well within the field of any telescope’s view. With this year’s event, it is worth keeping in mind the historical significance previous conjunctions have had.

Kepler’s fascination with planetary motion led, only a handful of years later, to his discovery that planets follow elliptical paths around the sun. And Kepler’s discovery would, before the end of that century, inspire Newton’s work on his most important contribution, the great Philosophiae Naturalis Principia Mathematica, where he laid down his ideas on the law of gravity, and which forever changed the world of science.

Without fear of exaggeration, it’s possible to link the wandering motion of the planets — never more clearly on display than when we can simultaneously see Saturn’s rings and the Galilean moons of Jupiter through a telescope — with the discovery that Earth is a planet within a solar system in which motions are dominated by a universal gravitation that acts between all massive bodies.

This is a corrected version of a story, originally published on Dec. 21. The earlier story said a conjunction aligned with Immaculate Conception instead of the conception of Christ.

Daryl Janzen is an Observatory Manager and Instructor, in Astronomy, at the University of Saskatchewan.