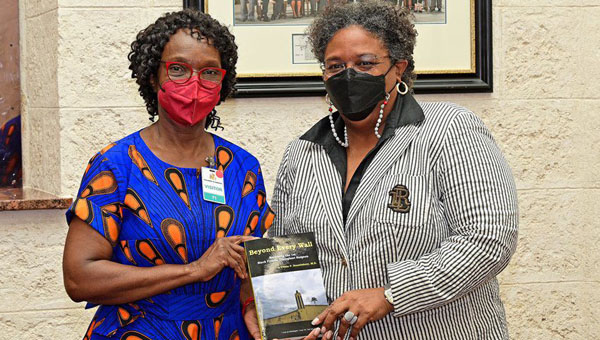 Barbados-born US kidney transplant surgeon, Dr. Velma Scantlebury (left), presented Prime Minister Mia Mottley with a copy of her book, Beyond Every Wall: Becoming the 1st Black Female Transplant Surgeon, at the end of a recent meeting.

BRIDGETOWN, Barbados (Monday, May 23, 2022) — Prime Minister, Mia Amor Mottley, has signalled her intention to enlist the help of the now-retired, first Black female Kidney Transplant Surgeon in the USA, Barbados-born Dr. Velma Scantlebury, to assist with expanding the current program at the Queen Elizabeth Hospital (QEH).

The Prime Minister spoke of the government’s financial burden, in treating the rising number of dialysis patients, during a courtesy call with Dr. Scantlebury, who is also a Professor of Surgery at Texas Christian University, University of North Texas Health Centre and Medical School, while in the Committee Room, at Parliament, last Tuesday.

The Prime Minister also wants to see a robust community outreach program, to properly monitor the most critical QEH diabetic outpatients, across the island, as a means of reducing the number of persons who need dialysis.

Mottley told the retired transplant specialist that her government was unable to sustain the high costs, and pointed out that Professor Scantlebury’s experience and achievements in kidney disease were needed “on the frontline”.

“Nothing would give me the greatest pleasure than to have this program started,” she told the gathering, which included Dr. Scantlebury’s daughter, Aisha White; Simone Ward of Forlam Foundation; Minister of Health and Wellness, Ian Gooding-Edghill; Executive Chairman at the QEH, Juliette Bynoe-Sutherland; and QEH Transplant Surgeon, Dr. Margaret O’Shea.

Prime Minister Mottley also received an update on the current transplant program, from Bynoe-Sutherland and Dr. O’Shea. On this point, Minister Gooding-Edghill mentioned Spain’s interest in assisting the government with the expansion of the program.

Mottley informed the meeting that the testimonies from persons, who have donated a kidney to save a life, needed to be heard, to get more buy-in from the public about transplants.

Dr. Scantlebury, a strong advocate for transplantation, also mentioned the link between kidney disease and diabetes.

She articulated the view that transplantation was a viable treatment option for kidney disease, instead of dialysis; and added that she was “here to serve Barbados”, in whatever capacity her expertise is needed.

The retired surgeon also agreed that testimonies were important, pointing out that the “right pitch” was needed to effect change.

The officials also discussed creating the legislative framework to facilitate organ donation and other health-related matters.