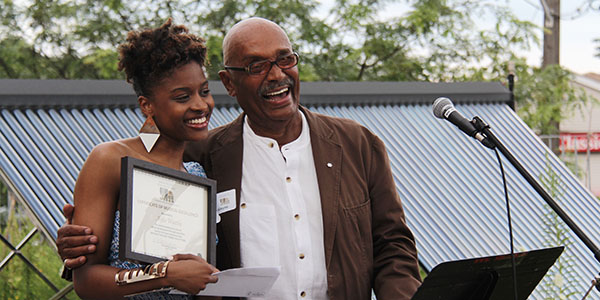 Archie Alleyne Scholarships Expanded To Include The Arts

TORONTO, Ontario – The Nia Centre for the Arts is teaming up with the Archie Alleyne Scholarship Fund (AASF) to expand the Fund’s program to award scholarships and bursaries to deserving young artists pursuing post-secondary studies in a variety of art forms.

At a reception on August 8 to celebrate the 10th anniversary of the AASF, which was launched in 2003 in recognition of jazz drummer, Alleyne’s 70th birthday, the announcement was made by Aisha Wickham, director of communications and operations of the Nia Centre for the Arts.

“Now through this partnership we will also be able to support our young people with financial resources to aid in their pursuit of artistic studies at the post-secondary level,” Wickham said.

She said when Alleyne initially launched the fund, it was specifically for jazz artists pursuing post-secondary studies and there are a very limited number of outlets for that to occur. Alleyne wanted to expand that to include other art forms like dance, theatre, photography, and other visual and performing arts.

This fall, they will roll out a new scholarship application process and the outreach will be expanded to ensure that they engage the broad range of young people who are pursuing arts at the post-secondary level.

The event also honoured Aijia Waithe, 20, a second-year student at Humber College, who is the 2013 recipient of the Archie Alleyne Scholarship Fund (AASF) and the eighteenth person to receive a scholarship or bursary from the Fund.

Waithe is pursuing a Bachelor of Contemporary Music degree majoring in vocals, and plans to move to New York upon completion of her studies.

The vocalist and lover of the dramatic arts attended Wexford Collegiate School For The Arts for musical theatre and intends to move to the United States to see what doors might open for her as an independent artist.

She is also working on an independent music project — an electronic press kit demo album — and is the representative of a company, Upright Music Republic.

“My Plan B, if that doesn’t work out, because we know the arts is very challenging, is to go to teachers college because I love younger children, and to work with primary children specifically,” she said.

Asked about her plans to go south of the border, Waithe said that although she loves Canada and was born and raised in Toronto, there are more opportunities in the US.

Alleyne, now 80, has made a significant contribution to the fabric of the Canadian cultural scene over his 65-year music career in Toronto.

“There never really were enough black musicians here in the city to carry on the jazz policy of music. And, what a lot of people don’t seem to understand is it’s the only recognized art form in America. It’s jazz and it’s a black music. Our youth of today don’t seem to understand that. They want to listen to Hip-hop and Rap but for me Rap is not music. It’s entertainment and its spoken word. All you need is a pen and a note pad. I’m striving for professional musicians,” said Alleyne.

The musician said he is not trying to get the young people to just play jazz but to be professional musicians.

“Jazz is a preference of music. Once you have learned how to play your instrument and learn the theory of music, how to compose and how to arrange, and all these other important factors. Its not just jazz, it’s a professional musician capable of playing anything,” he said.

Alleyne said he is happy with the partnership noting that right now there are hardly any black musicians going through the school programs to learn how to play. He said schools have called him asking where are the black musicians here.

He has performed with some of the finest artists of our time, including Billie Holiday, Nancy Wilson, Joe Williams, Mel Torme, Big Joe Turner, Abbey Lincoln, Carmen McRae, and Nina Simone.

Alleyne also formed the Evolution of Jazz Ensemble of young musicians, and is the co-founder of the award-winning Kollage, a hard bop sextet. He was awarded the Order of Canada in 2011 for his extraordinary contributions as a musician, entrepreneur, activist, mentor, and philanthropist.

“Nia Centre is committed to supporting up-and-coming artists in their educational and career development,” says Mark V. Campbell, executive director of Nia Centre for the Arts.

“Archie Alleyne is a living legend in our midst who has contributed so much to the development of the Canadian music scene and, in particular, to young musicians. We are honoured to be able to join forces with Mr. Alleyne to help expand his scholarship program.”

Nia Centre for the Arts is a Toronto-based not-for-profit organization focused on the development of young people through photography, music, videography, drama, visual arts, dance, spoken word, and other community arts delivered and showcased from an Afro-diasporic perspective.