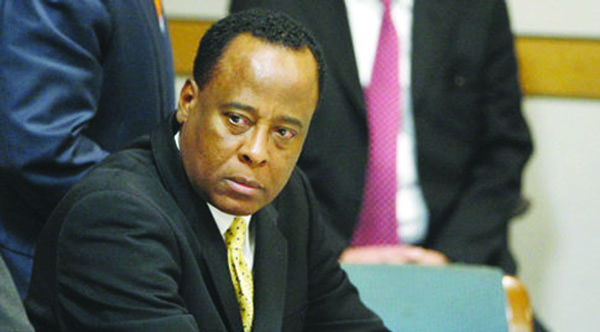 LOS ANGELES, California CMC – Less than two years after he was found guilty of involuntary manslaughter in the death of the American pop star, Michael Jackson, the Grenada-born personal physician has been released from jail.

Dr. Conrad Murray, 60, who was raised in Trinidad and Tobago, was set free on Monday after serving half of the statutory maximum of four years in jail.

Prison officials said he was released because of a US Supreme Court decision on state prison conditions that diverted Murray to the overcrowded Los Angeles County jail.

Officials also said the cardiologist was released to a “representative.

“He did lose some weight, but he was doing great when I spoke to him. He was elated to be out,” his lawyer, Valerie Wass, told reporters here.

The lawyer said her client plans to proceed with his criminal appeal for injecting Jackson with a fatal dose of propofol in 2009. She said Murray would also fight revocation of his medical licenses in Texas and California.

But Brian Panish, an attorney for the Jackson family, said the cardiologist should not have “a chance to hurt anyone else” by practicing medicine.

The former cardiologist was convicted in 2011 of causing Jackson’s death in June 2009 by providing him with the surgery-strength anesthetic propofol as an off-label sleep aid in his private bedroom without the proper equipment.

“He has already paid his dues, you cannot pay for something indefinitely. In that sense there is the possibility where he can make a case to the Medical Board and they will consider whether he can be registered,” Khan told the Trinidad Express newspaper.

The newspaper also quoted a close friend of Murray who flew to the United States to lend support to the convicted medical practitioner.

Businessman Garreth Kalloo, who is the godfather to Murray’s son, said the doctor was treated unfairly and this country should welcome him with open arms.